It was a beautiful, warm morning. Refreshed after the great day before, the food, the additional rest and Elad’s company I was ready to head to Akureyri. 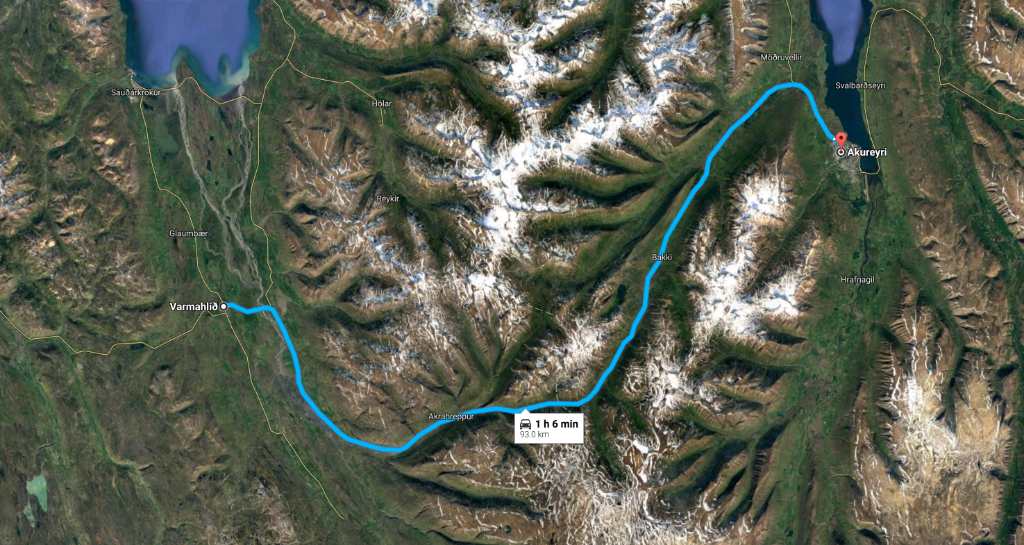 After the must-have coffee, some chatting with the British cyclist and taking way too long around the camp we started to dry and pack the tents and get ready to go.

I was a well “oiled machine” by now went it came to camping and packing. I knew where everything must go, every little thing in its dry bag, on the right side of the bike, in the correct pannier, at the top or at the bottom, etc. Later there were cyclists that told me they hated packing and unpacking every day, but for me it was like a ritual giving me the time to mentally prepare for the day ahead, I loved it. 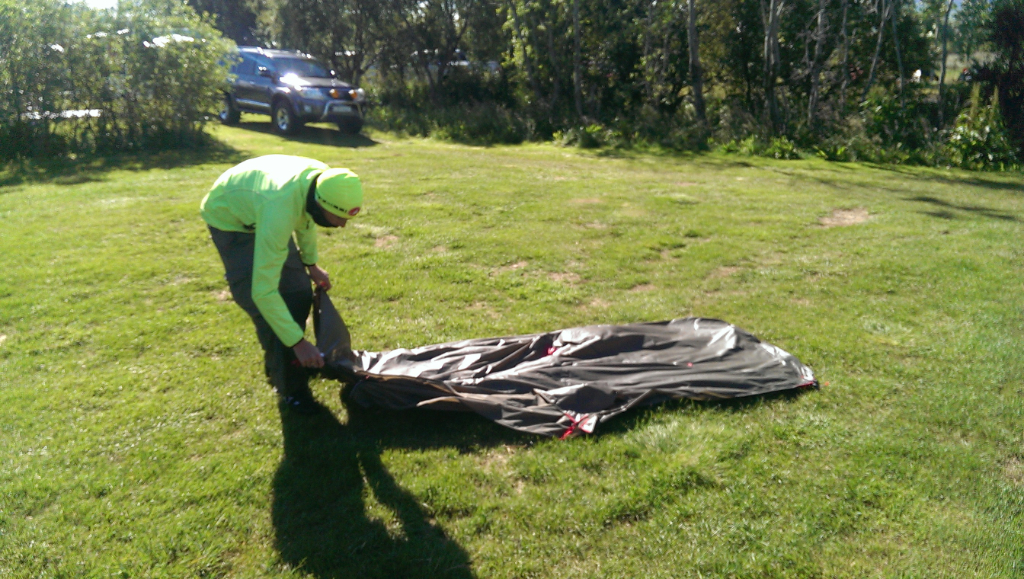 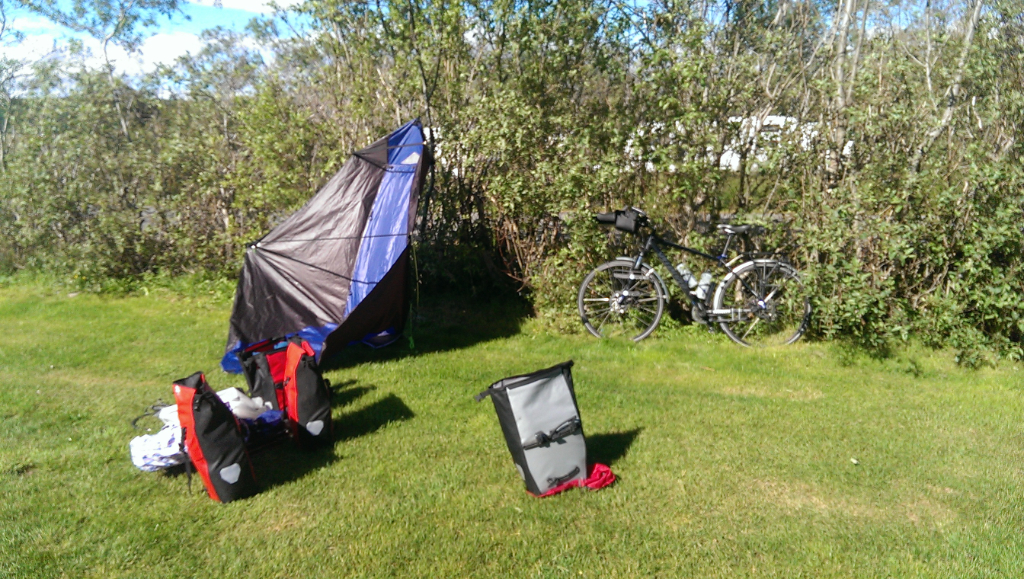 I hung my tent int he sun and off the ground. It dried quickly and everything else was already packed and ready.

We slowly left the camp and went down the hill to the petrol station at the junction where we left Road #1 the evening before. 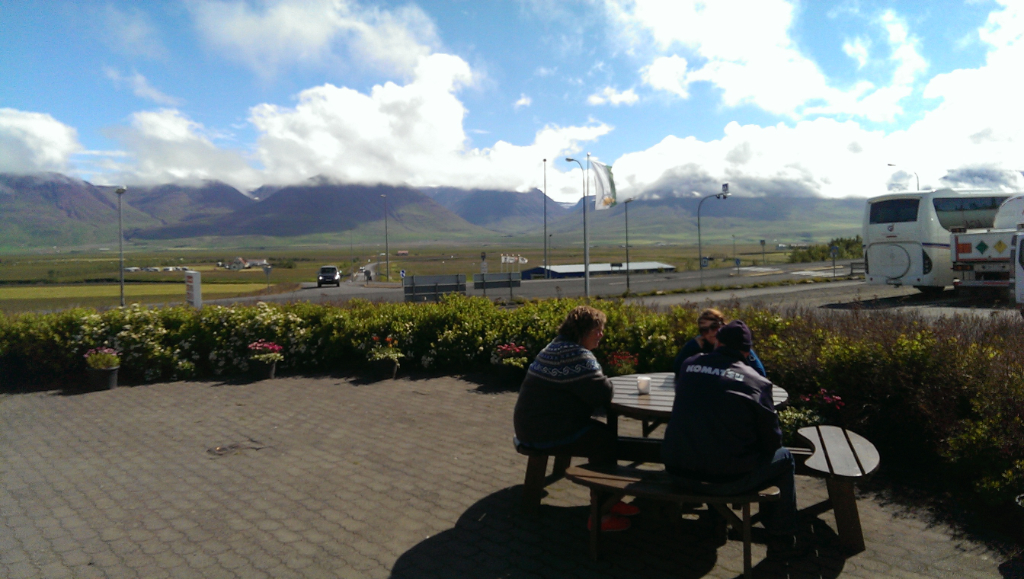 The road ahead toward the mountains, a view from the petrol station. You can see the road in the centre where the truck with the headlights is.

I stacked on a lot of cookies, Elad got some salami, bread and cheese and we went out. We were starting to get along very well, but none of us wanted to let go of their original idea to cycle alone. It was an awkward subject to address in a way, as you sit next to each other, it’s easy to just continue together, but at the same time you wouldn’t want to impose yourself. If you start together then you would need to spend the rest of the trip together or have more awkwardness by wanting to split up.

Regardless, we agreed to cycle on our own. I let Elad a head-start, since I knew he is faster than me.

The day started by crossing the valley, on a winding road that slowly made its way to the mountains in the distance. It then turned right (South I think) and went parallel with the hills. It was a pleasure to ride with the sun keeping you warm and the wind cooling you down to maintain a perfect temperature. 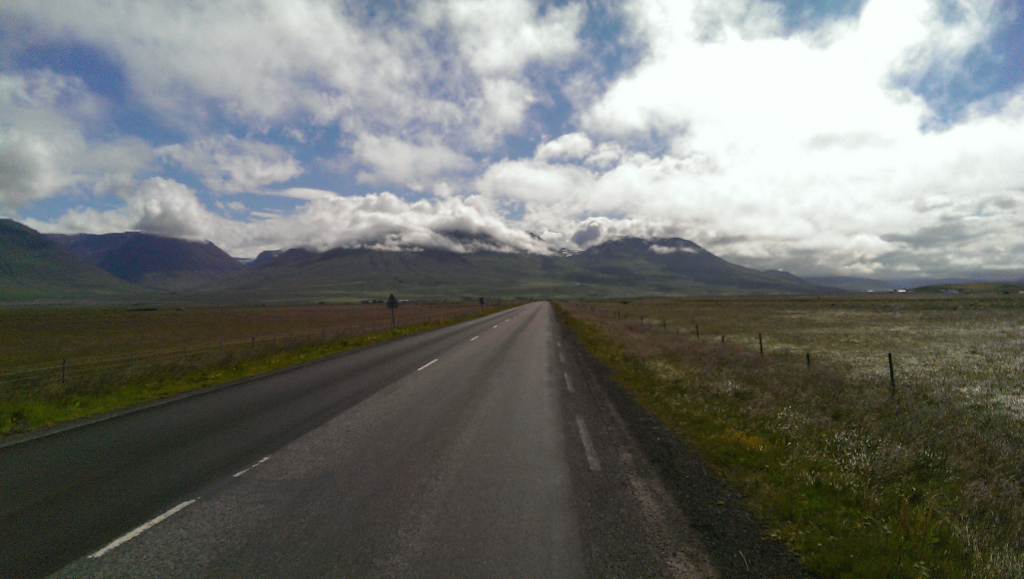 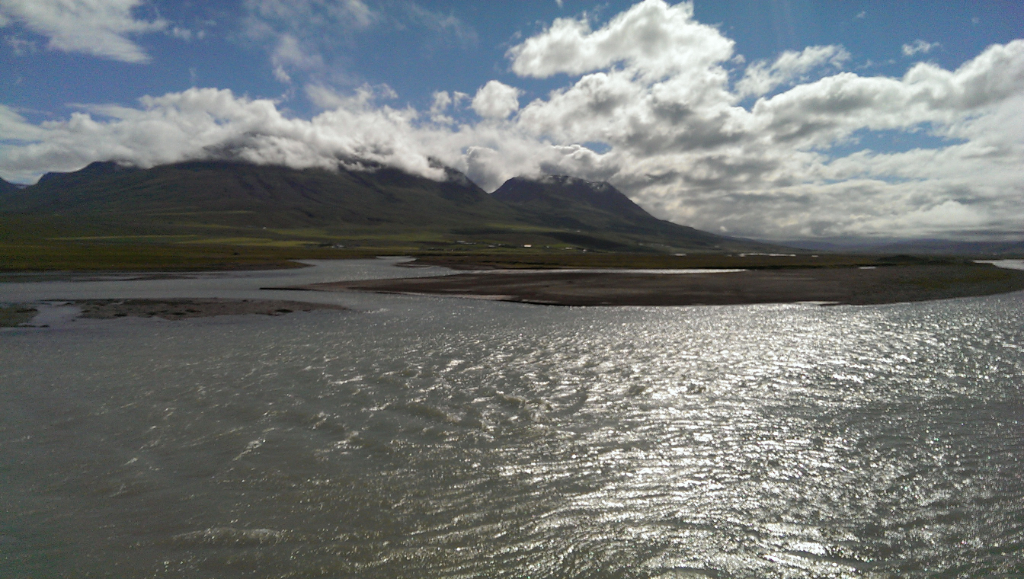 Continued cycling next to the water, which seemed like a glacial river entering the bay.

Elad had stopped on the side of the road and I passed him with great speed (on the highest gear) while waving at him. I pressed on as I didn’t want to lose the inertia and was really enjoying the flat with a bit of tailwind.

The road was slowly starting to climb. I knew that according to my map there would be a really steep climb ahead, but no too long and then I would be at a sort of a plateau for a bit. 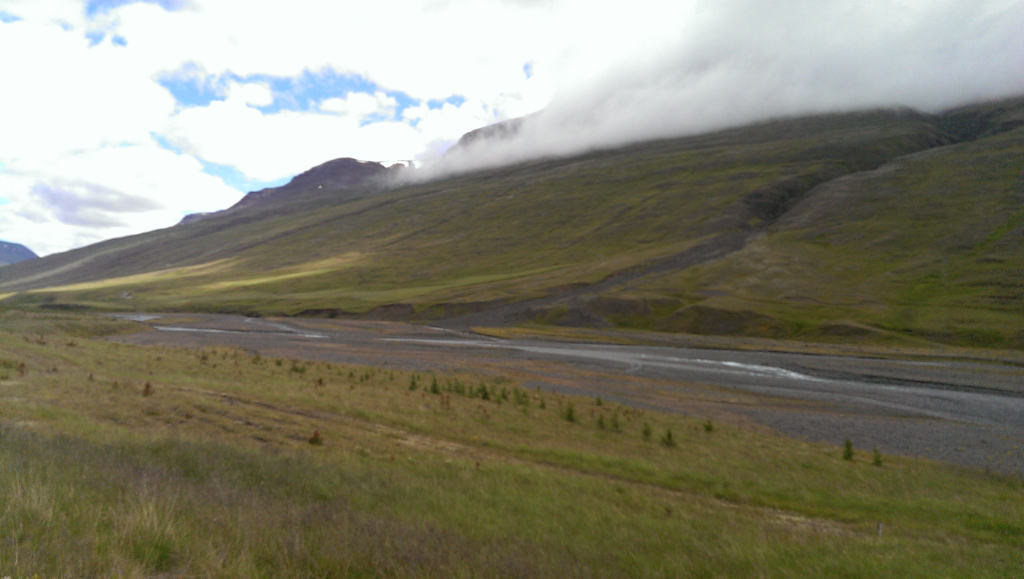 Elad caught up with me soon and passed me. I continued with rolling heels, feeling the pain and slowly progressing. There is a very strange psychological effect when another cyclist overtakes you with ease (normally we all push just when overtaking to make it look like we’re not struggling). It makes you feel slow and sluggish and you lose a bit of moral.

The road continued through a small pass with a steep fall on the right side (where I was) down into the river I saw earlier in the planes. It was hard work, the climb was actually steady but constant, kilometre after kilometre (hard to tell by the map). My legs were burning. As much as I wanted to stop and rest, I didn’t let myself. I could see Elad in the distance and I didn’t want to lose him from my sight. I was telling myself “just another 5km and you can stop”, “just another 500m and you can have some water” (all sorts of ways to convince myself to go a little further before getting a “treat”.

And there it was, there was a long downhill coming into the valley. Finally, I was going to rest. But as soon as I came out of the turn a massive gust of wind blew back in my face. Damn, it was coming straight in my face from the valley. I went very low with my chin next to the handlebars and continued to peddle. The wind was really strong, making it hard to control the bike, so I stood up and let it “hit me” in the chest and slow me down. 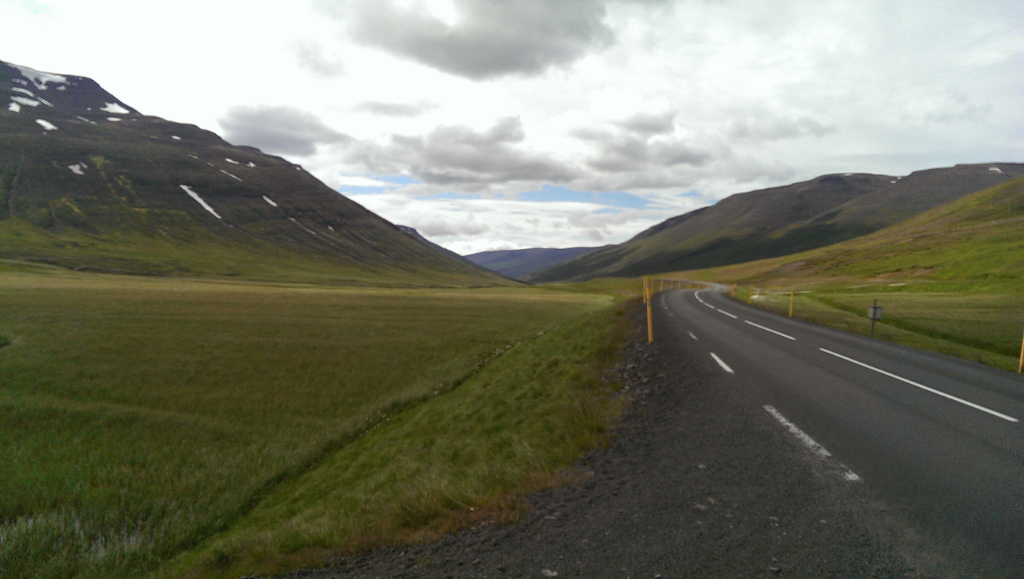 Sometimes you just can’t fight with nature (more like never). 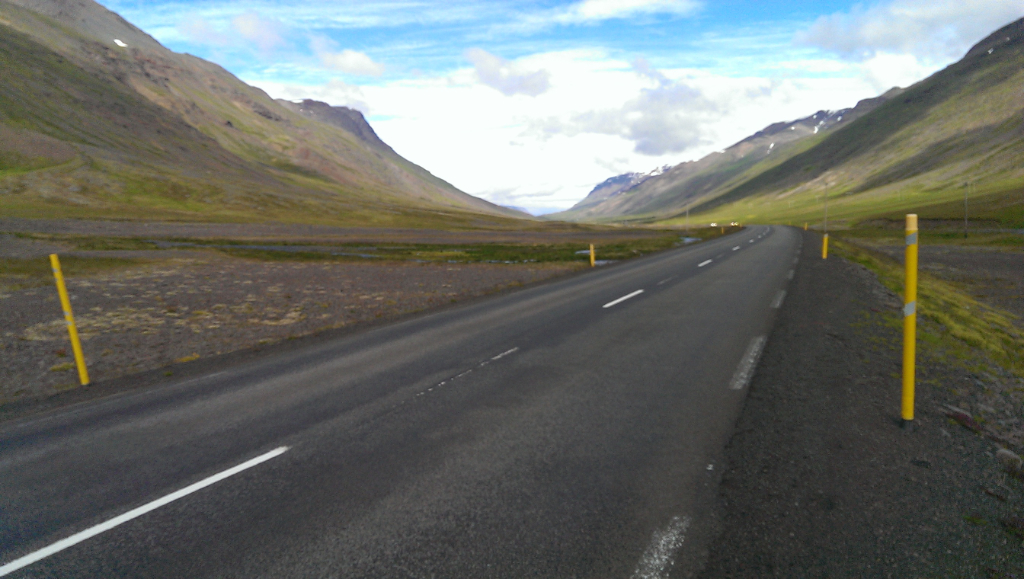 We had made an agreement with Elad to meet for lunch just after the midpoint to Akureyri. There was a small building symbol on the map and he would wait for me there unless I’m not too late. And I pushed on as I wanted to reach there before he leaves (in a way to prove to myself that I’m not that slow). 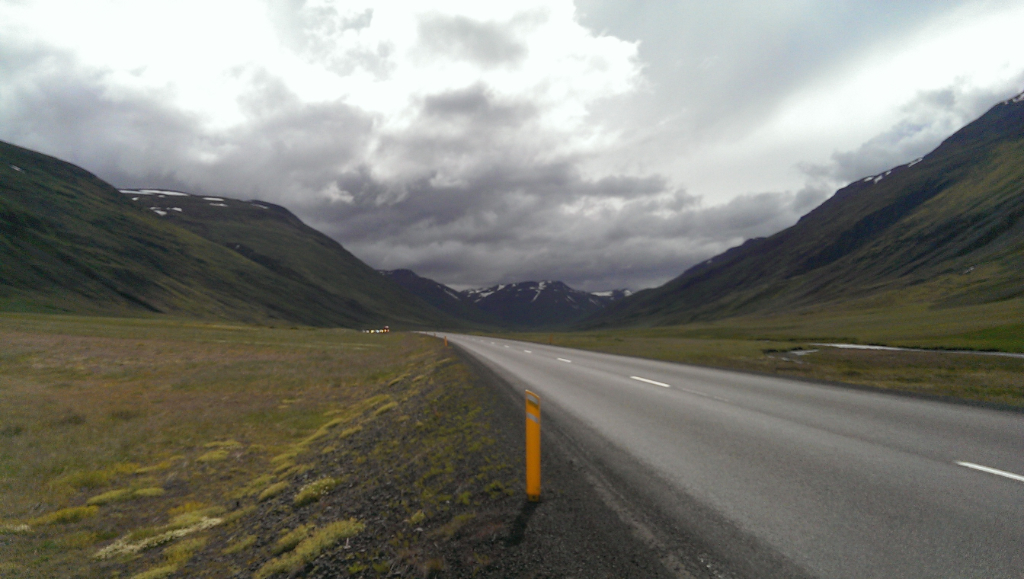 Looking back – “I just came from there”. 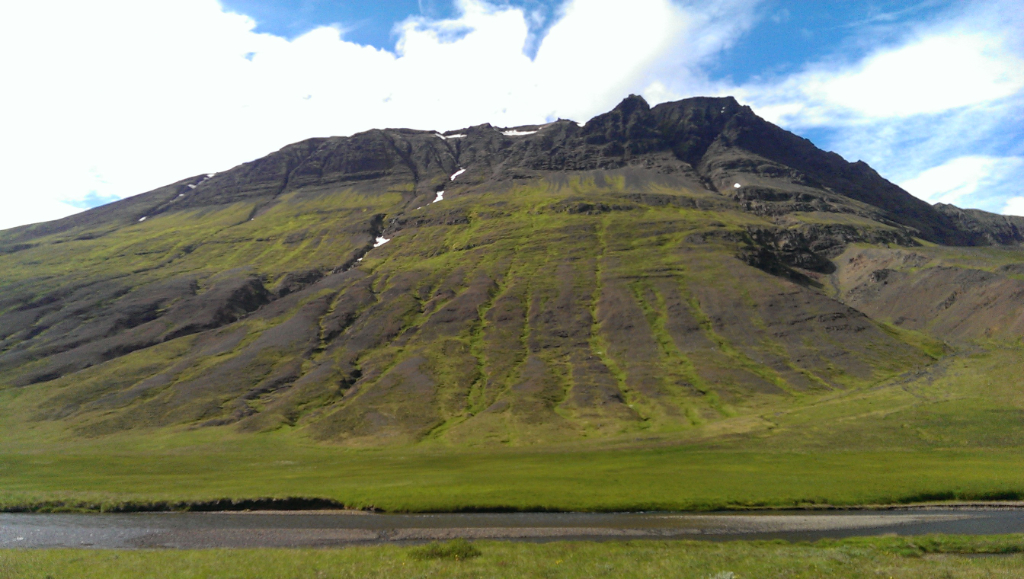 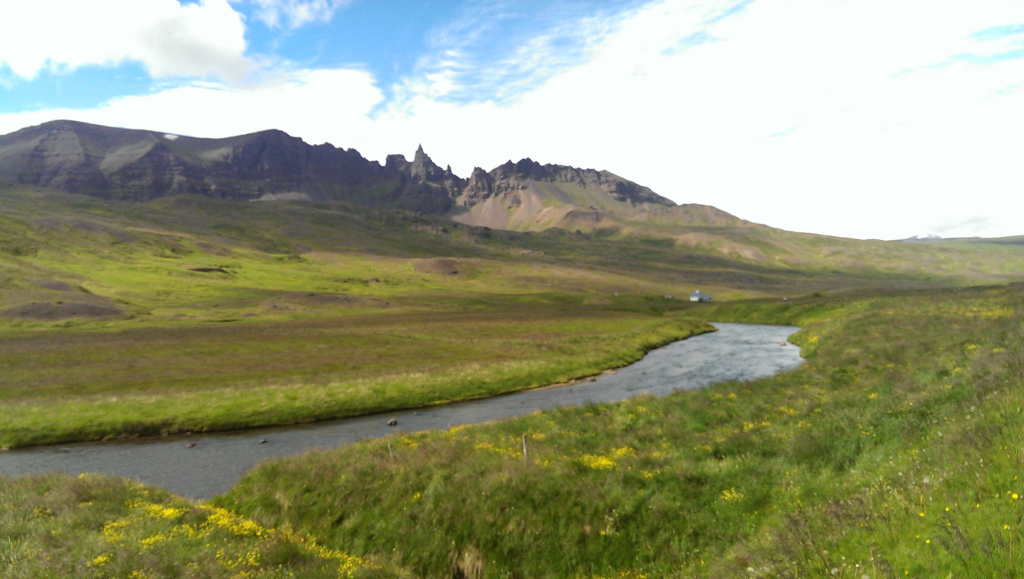 Finally I saw Elad on the side of the road and stopped. He had already had his lunch and was getting cold, so was ready to leave. The wind was straight in our faces, headwind all the way, so he showed me the spot where he had been hiding. We agreed to meet in Akureyri and he left.

I sat down behind a fence to hide from the wind and enjoyed a thirty minute break with two-three sandwiches. Basically slices of cheese (imagine three-four of them) on a slice of bread, with a slice of ham (ham is more expensive). I had a few biscuits for desert downed with some water, then looking around I took some photos and continued on the road. 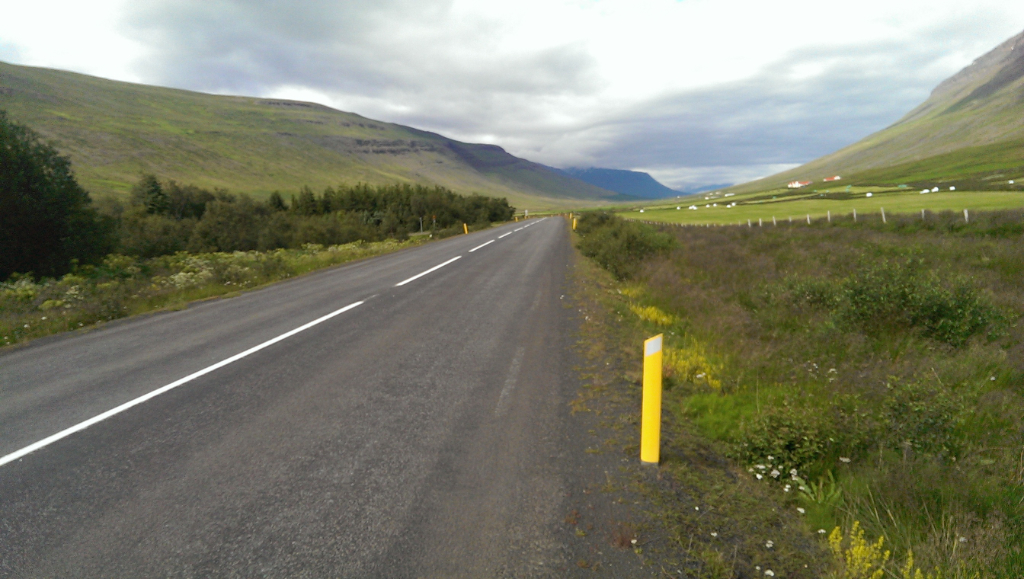 I saw a few more cyclists coming from the opposite direction. There was a lone one, then a group of three (if I remember correctly). We waved at each other and I thought how lucky they must feel with that tailwind behind them that was slapping my face. 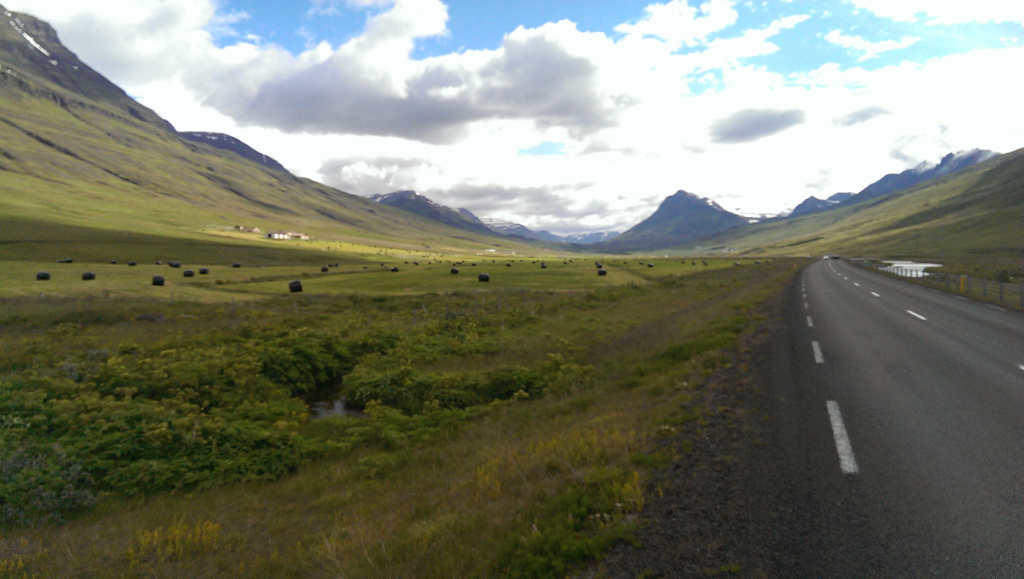 Progress was slow because of the wind, however, the views were picturesque and breathtaking. I lost connection with the pain and the wind and let my eyes zoom on the smooth hills stopping only to briefly analyse the little farm houses and move yet again into the distant mountains on the horizon. 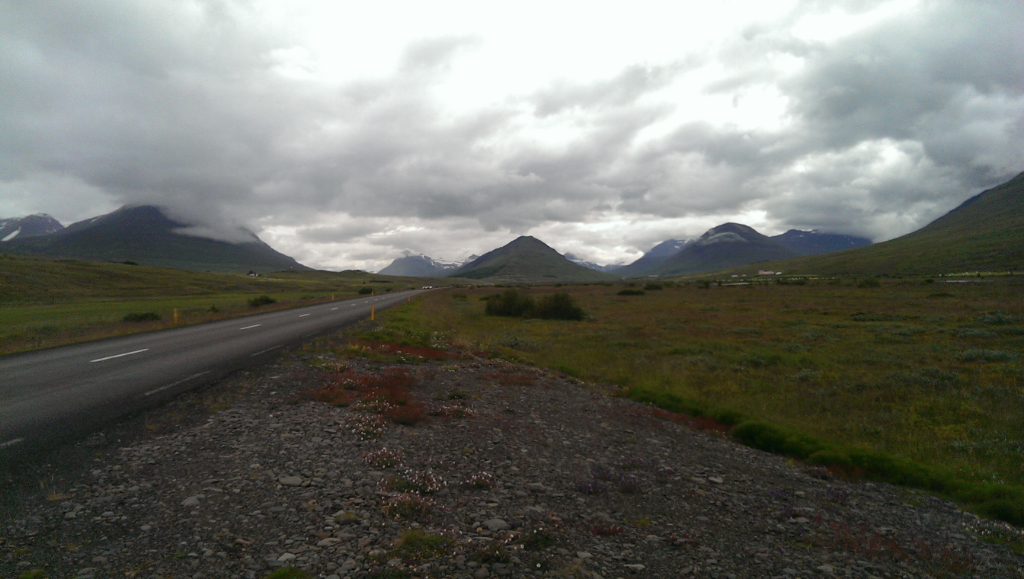 The view from behind again. It’s worth looking back every now and again. You can see equally as much as by looking forward – the perspective always changes.

I was 3/4 of the way to Akureyri by now and couldn’t wait to turn right, but before that there was one last climb to do. My head went down and I concentrated to get into a pace. The music was on the fastest tracks I had and while I was progressing well suddenly an all too familiar shadow appeared next to my bike. “Oh no”, I turned around and just above my head was one of those birds, literally not more than three-four meters away. It seemed very angry and dived down to try to peck my helmet. I took my headphones out. The creature was giving out devilish sounds. I stood up on the bike and started to peddle as fast as I could. The bird went high up and turned to the right landing on the side of the hill. As soon as it did that two or three more flew up. One from the left and two from the right. “Really???”!

I pushed on, I couldn’t stop, I knew they don’t care for any threats. The one from the right started to fly right in front of me. The other two, in the typical fashion these lovely species had, tried to bomb me with their faeces.

Finally, after probably two or three kilometres of chasing they gave up. I was completely exhausted, sweaty and drained. Those birds took the last energy I had. That’s when the road decided to turn up into another hill. It went on and on and on. After every turn it would twist even more and climb further up.

Eventually the climb was over. I looked down and saw Akuereyri in the distance, still about another seven kilometres to go.

I sent a message to my friend Alex, who was online at that time and asked him to look for cheap AirBnb options. I was cold and tired, just wanting to have a good night’s sleep. I had promised myself that I won’t go for any hostels or AirBnb apart from one single time at the most. That time was now.

He found a decent one for around £28 (that was the very cheapest one). Alex booked it for me and with that in mind I headed further. Soon in the city I looked on Google Maps for the place and found it. It was comfortably situated in the beginning of the town. 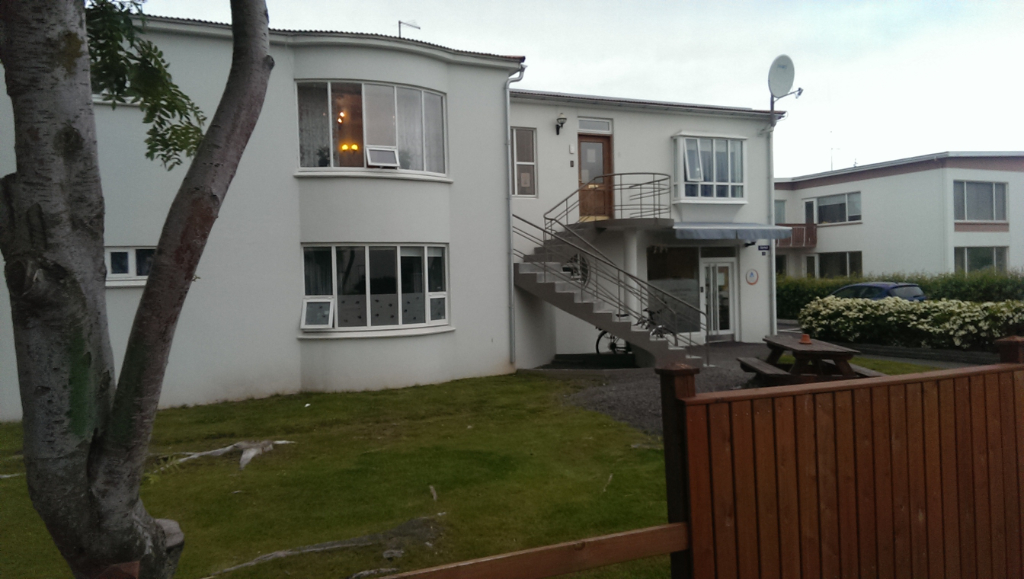 The bike locked at the outside. The registration was on the second floor and the dormitories on the first.

After signing in and leaving my stuff, I decided to go for a walk around Akureyri. After all it was the capital of North Iceland. Also I was planning to visit Elad at the campsite.

But the first thing I need to do is GET FOOD – I hadn’t eaten anything since those sandwiches at lunch (plus the occasional cookie/biscuit)!

I stopped at a small sandwich shop in the city centre and ordered a full sandwich with a can of Pepsi. It was nice and warm, I enjoyed the sandwich and then decided to order another one, the same, again with a Pepsi. 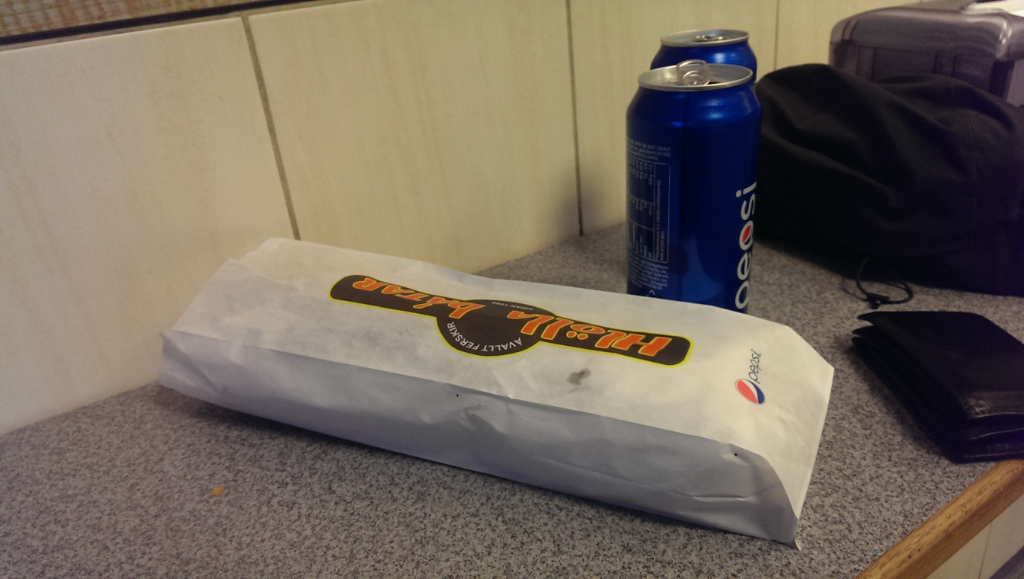 After the second one I felt human again and continued with the walk through the centre. Here are some views from around Akureyri: 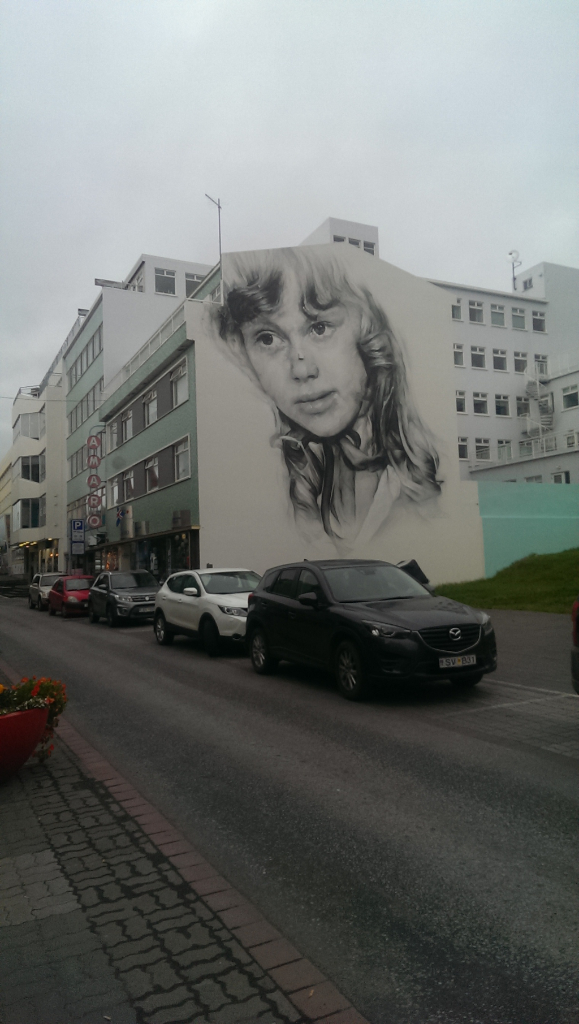 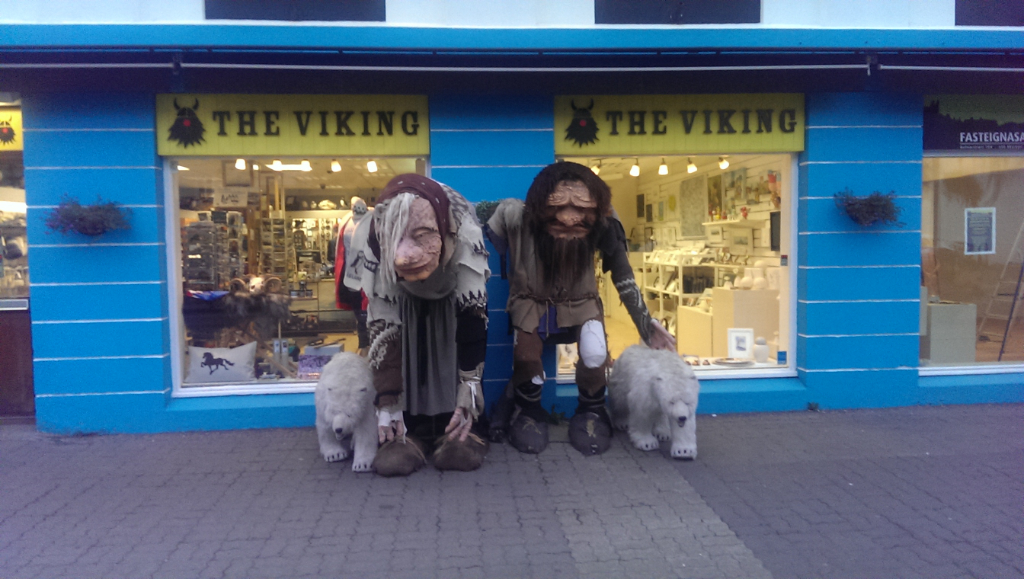 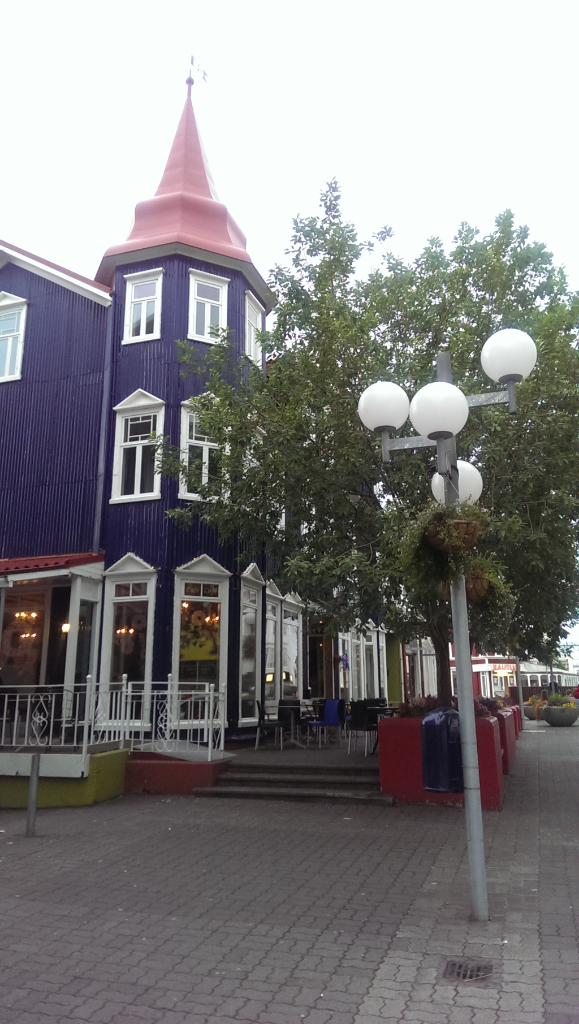 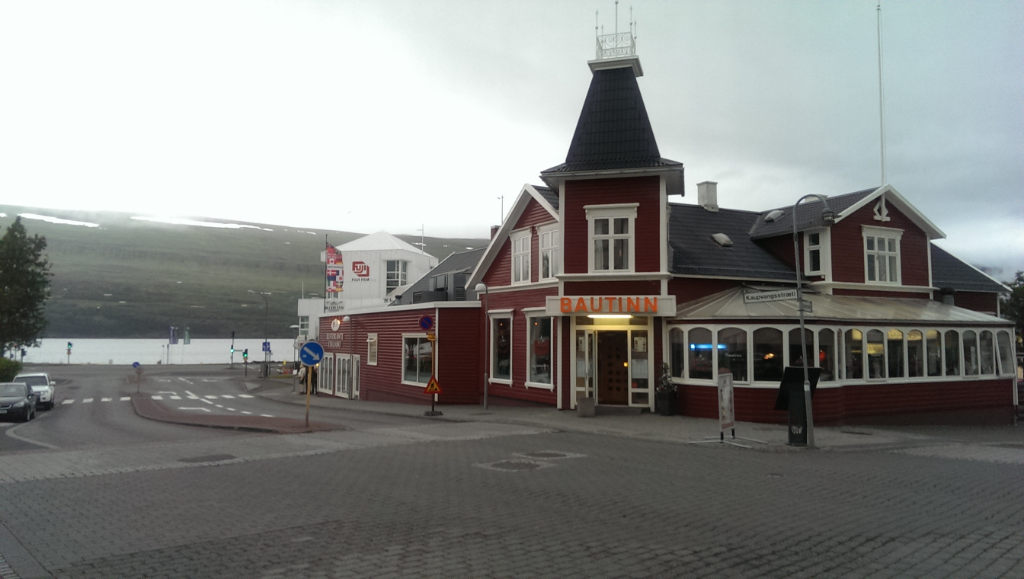 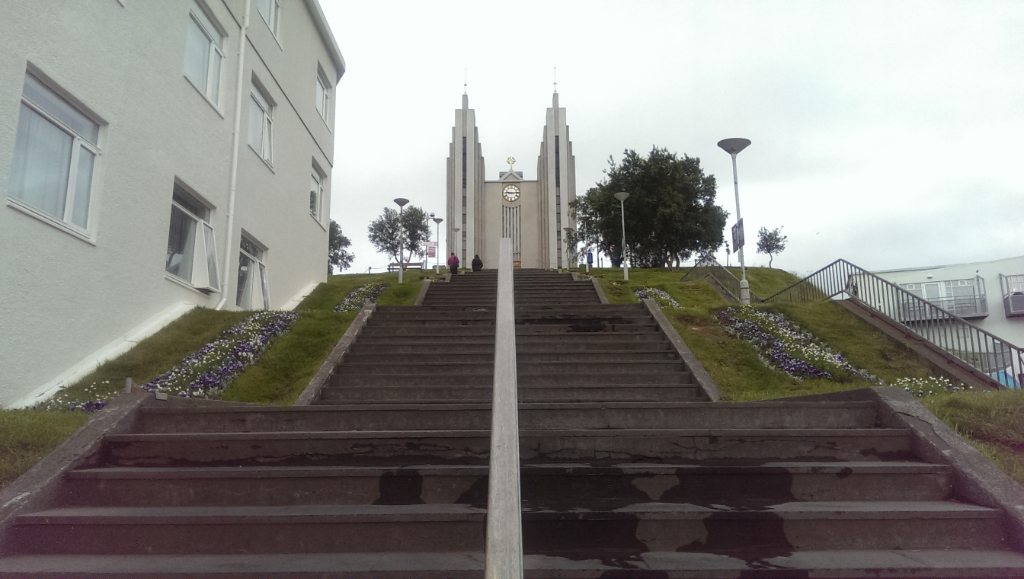 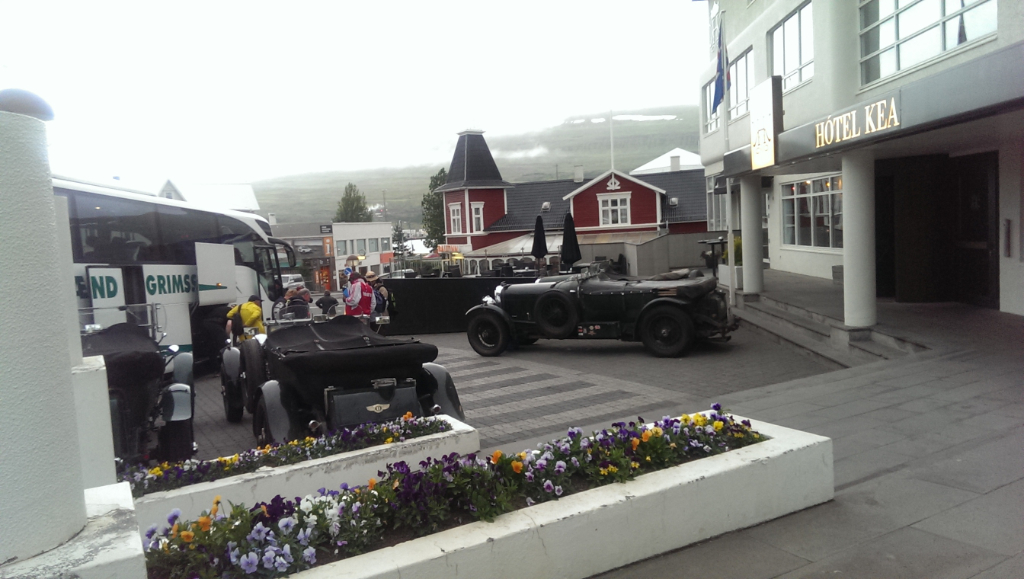 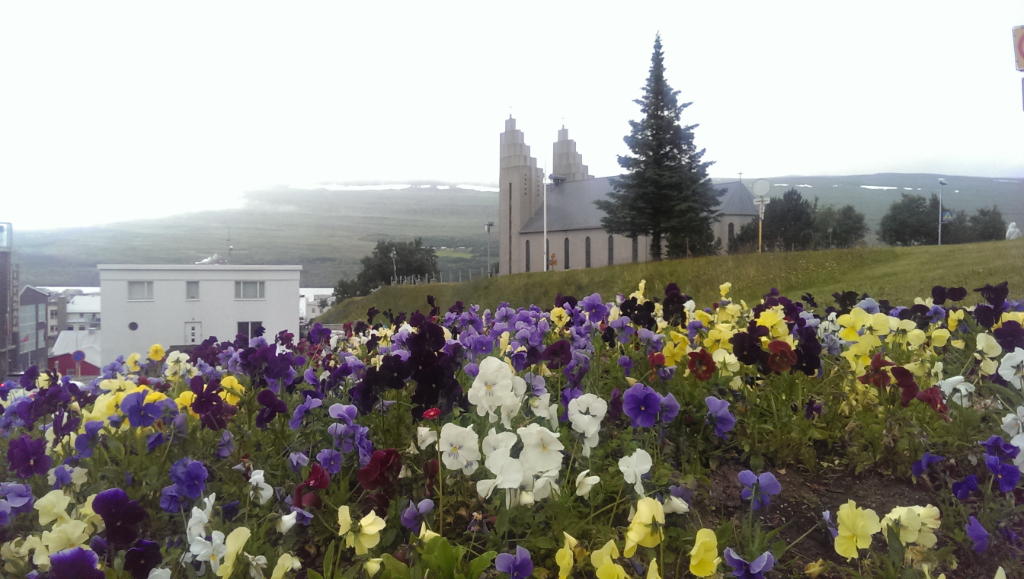 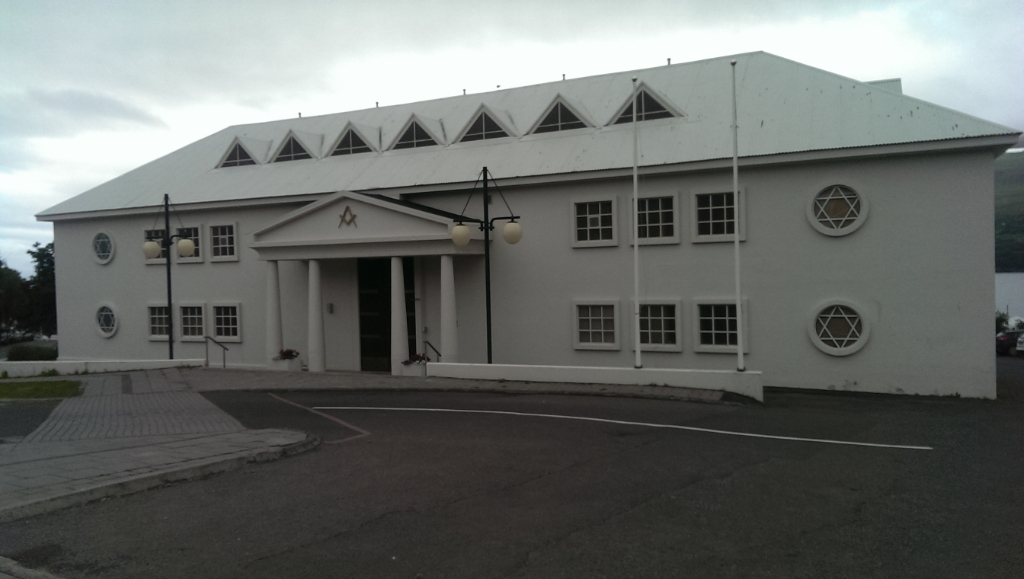 Then I headed to the campsite. Walking through the tents I found Elad’s with his bike locked just behind the tent. I called him and he jump out of the tent happy to see me. We chatted about how the rest of the ride went. I told him about my experiences with the birds and we headed to the nearest store to get some beers.

Sitting on an outside table while it started to drizzle we continued sipping our beers and chatting. It was a really nice and relaxing evening (even with a 2.5% alcohol beer). I had to go as it was getting late, we said goodbye and I left.

By the time I was back at the AirBnb it was dark outside and the lights in the room were off as everyone were already asleep. Damn, I hate waking people up. Quietly, using my phone’s screen light I went to my bed, settled as quickly as I could, put all the devices to charge and went to bed. That bed… the difference it makes to have clean sheets, warm room and be able to stretch and turn. It felt like being in a king’s bed.