I could hear the raindrops hitting the tent walls. I turned on the other side and hid my face in the sleeping bag. Everything was hurting and the day before drained all my energy. There was no energy left to motivate myself to get out in the rain, pack all the gear and cycle all day through the mountains.

Not sure how long after but I woke up again. The rain had subsided and I needed to visit the little boys’ room. 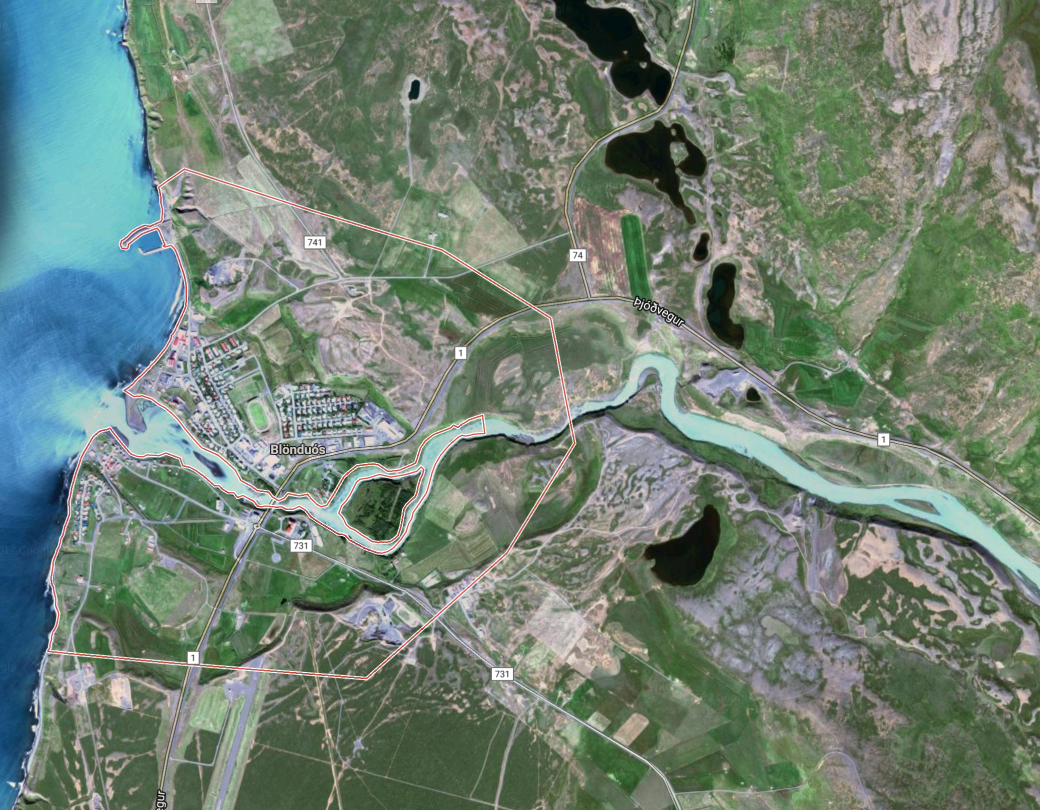 It was the first rainy day since arriving and it was miserable. Stopping for a day to rest and not cycle was very welcomed. I had some oats with coffee, washed some clothes and put them to dry.

Next, it was time to give those famous thermal springs a go. I hadn’t tried them and was looking forward to just soaking in the warmth and resting my muscles.

After asking at the campsite reception and armed with Google Maps I went on to have a walk and find the coveted spa treatment. 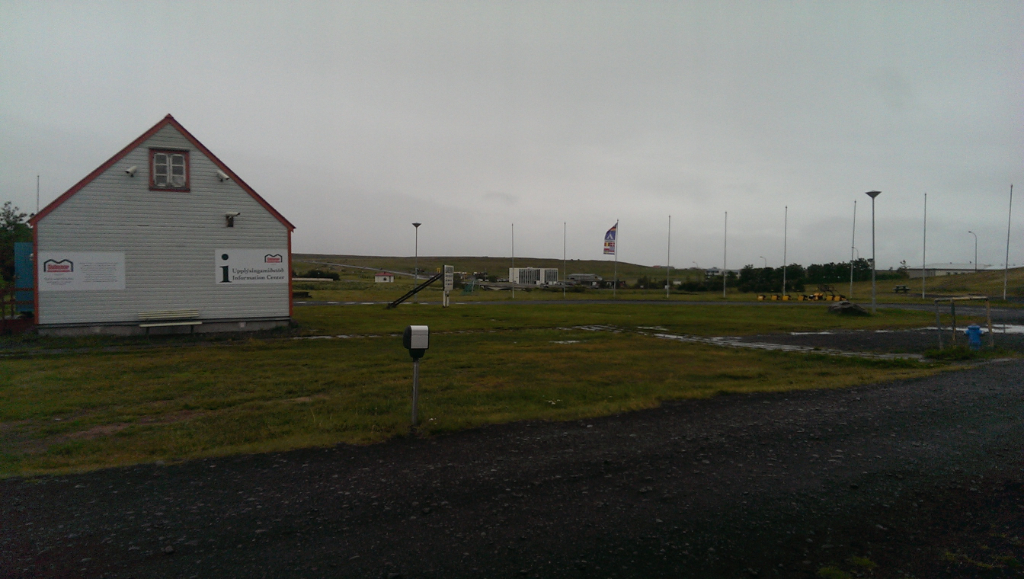 Since Blonduos is a tiny place, I walked no more than 5-10 minutes and found the place. Walking in I must have looked like coming from the moon, because there were a few puzzled looks sent my way. I was with the waterproof jacket and trousers, bearded and with another three layers of clothes underneath. Straight to reception. After paying I asked where are the springs are and the girl pointed through the window to the outside. I was confused and asked her why would someone want to stay outside. She said that it’s common since the water in the springs was very hot (38-40 degrees) and people normally sit in them while it rains or was snowing even.

Hesitantly I moved on, showered and went (rather ran) into the bath while it was raining and the cold wind was blowing. “Ahhhh” was the only thought in my mind. Submerged in the water, it was an amazing feeling and my muscles were thanking me for it. I massaged the tightened thighs, stretched and enjoyed it fully!

After about an hour and a half my head was getting too cold from the wind while the rest of my body was getting cooked. It became more crowded, probably because people finished work and I decided it was time to go.

After some free coffee at the reception I left and set myself for the textile museum at the edge of the little village / town.

Coming from design I’ve always been fascinated with traditional patterns and motives, with folk art.

It was becoming obvious that the museum is near as trees on the side of the road were wrapped in woollen, knitted, multi-coloured scarfs.

The museum itself has a collection of traditional Icelandic costumes, textile patterns and traditional tools for working with wool. It also hosts a modern exhibition which changes from time to time. You can read more on their website here. Part of the building of the museum used to be a stable and was later converted and extended. One of the rooms hosts items from an era long gone, collected by a local that donated them to the museum.

My phone battery was dying, but I took a few photographs (after asking for permission of course): 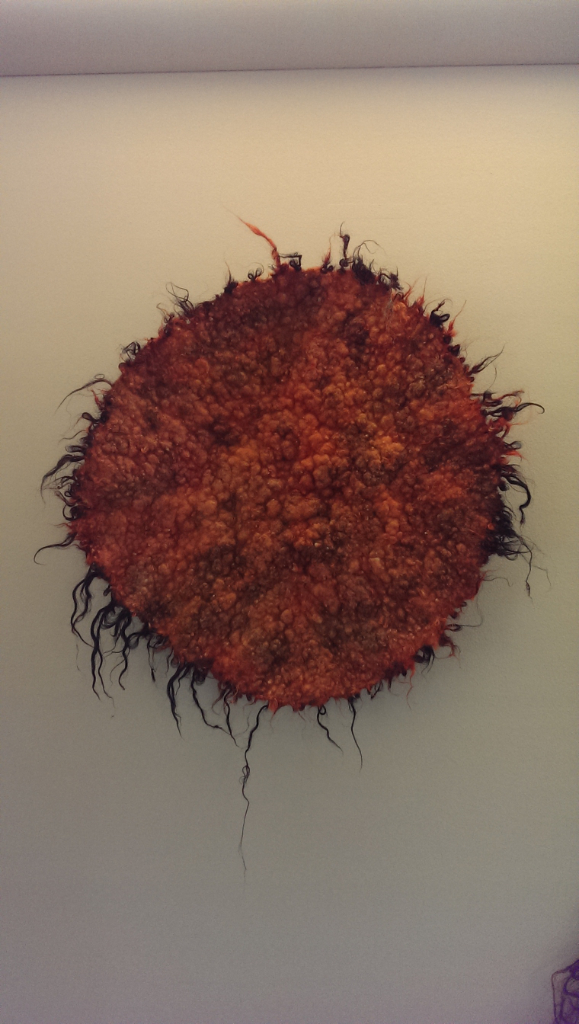 Unique wool art part of the modern exhibition from an Icelandic artist. The wool is treated and coloured with dyes. 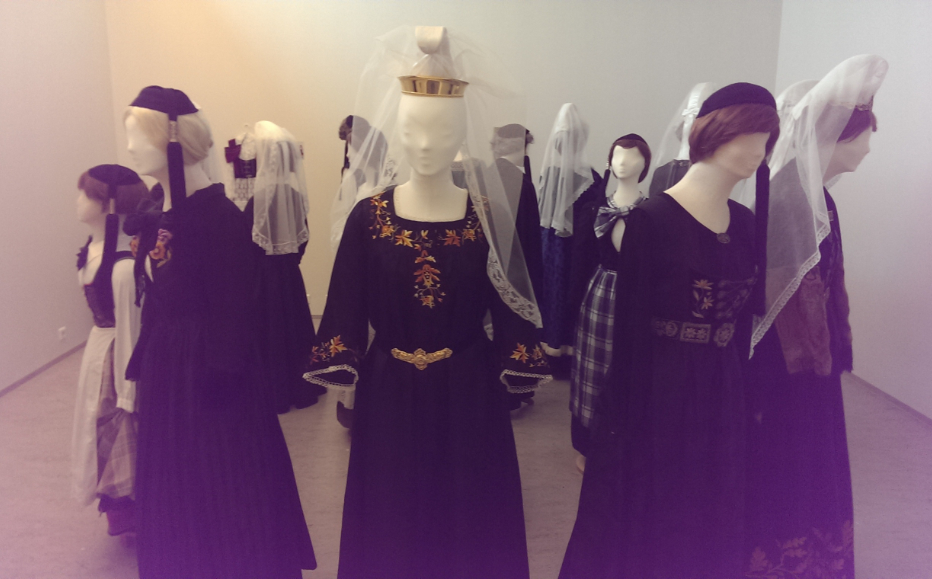 Traditional female costumes ranging from everyday ones to wedding and formal occasions. 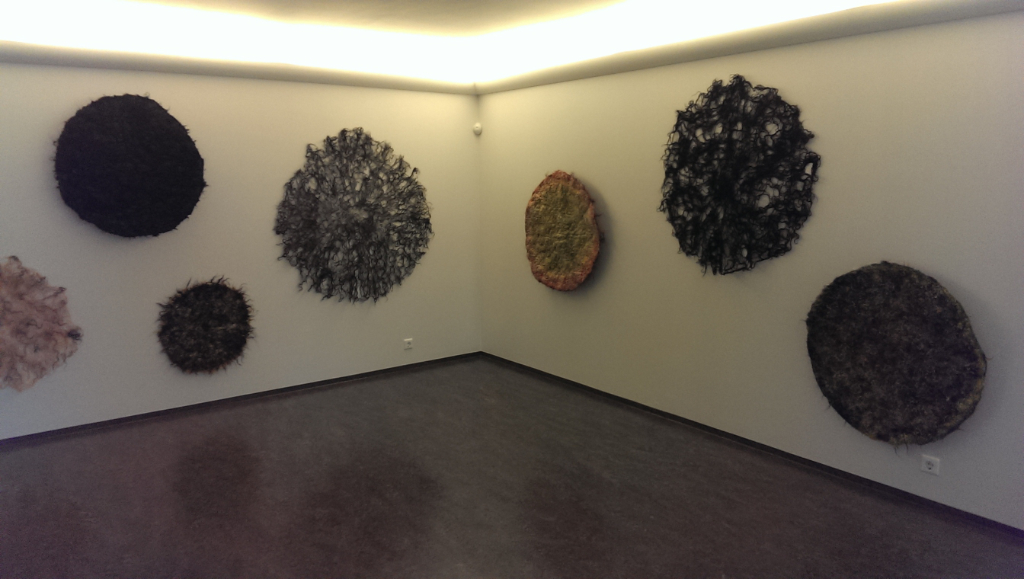 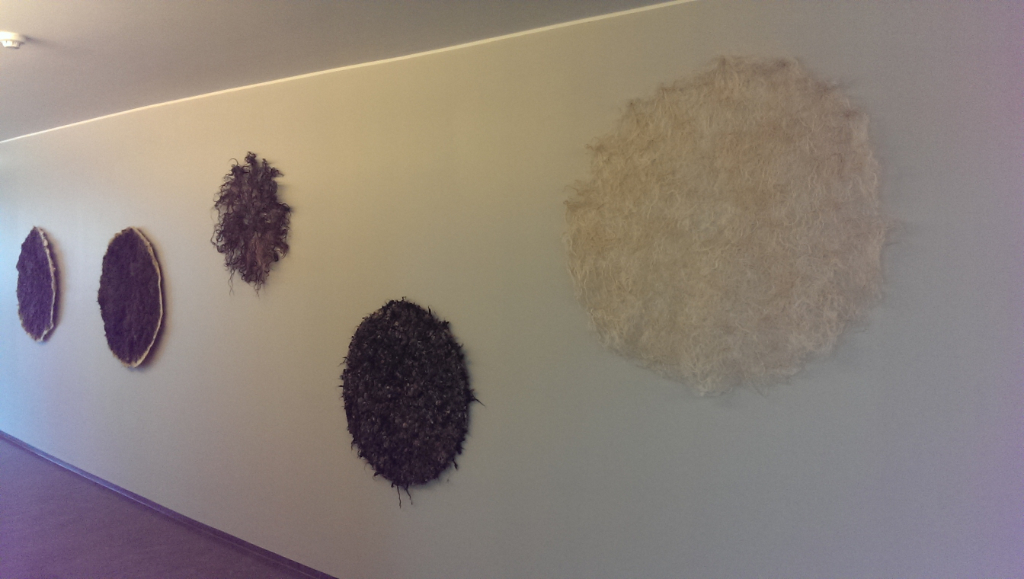 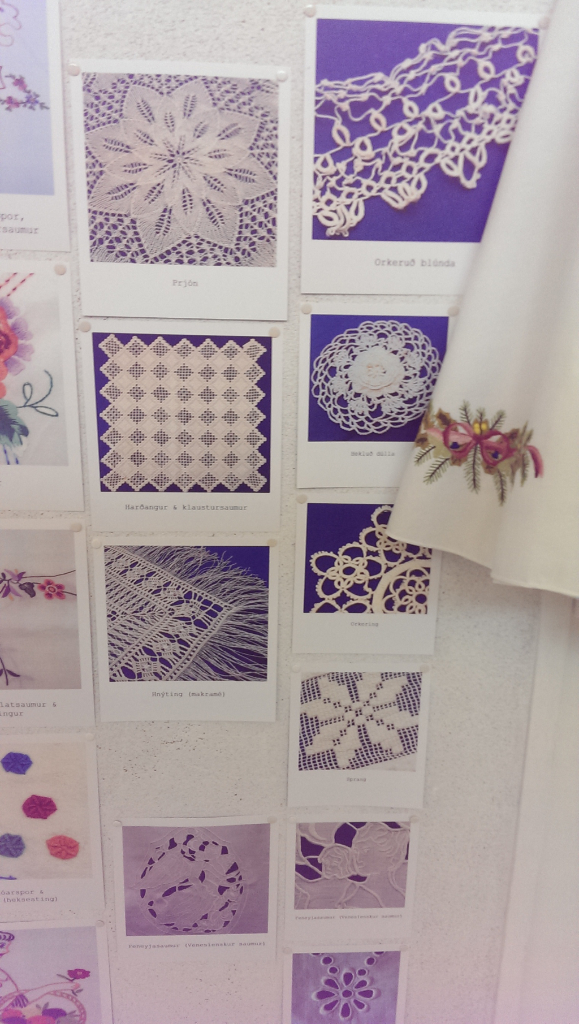 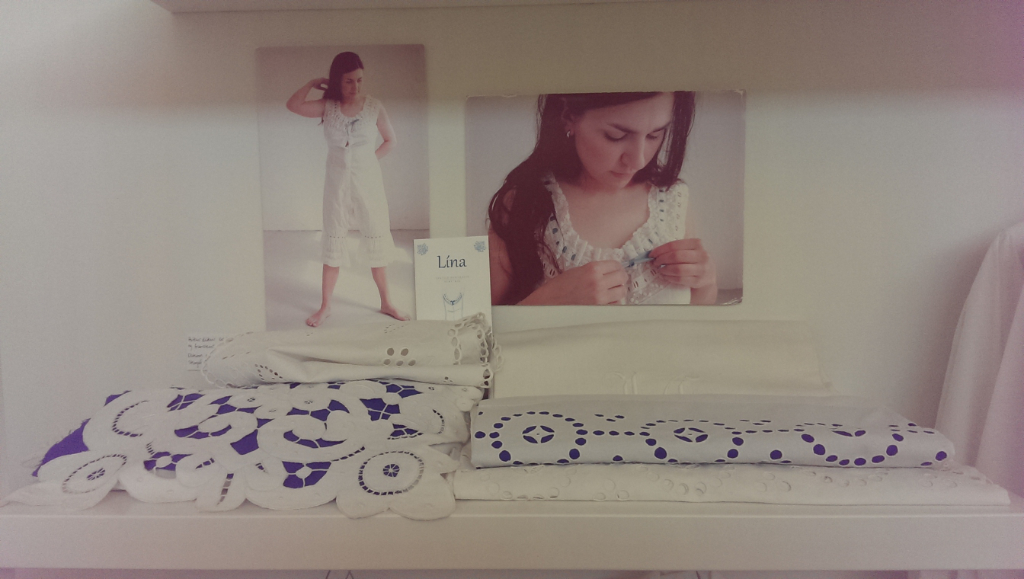 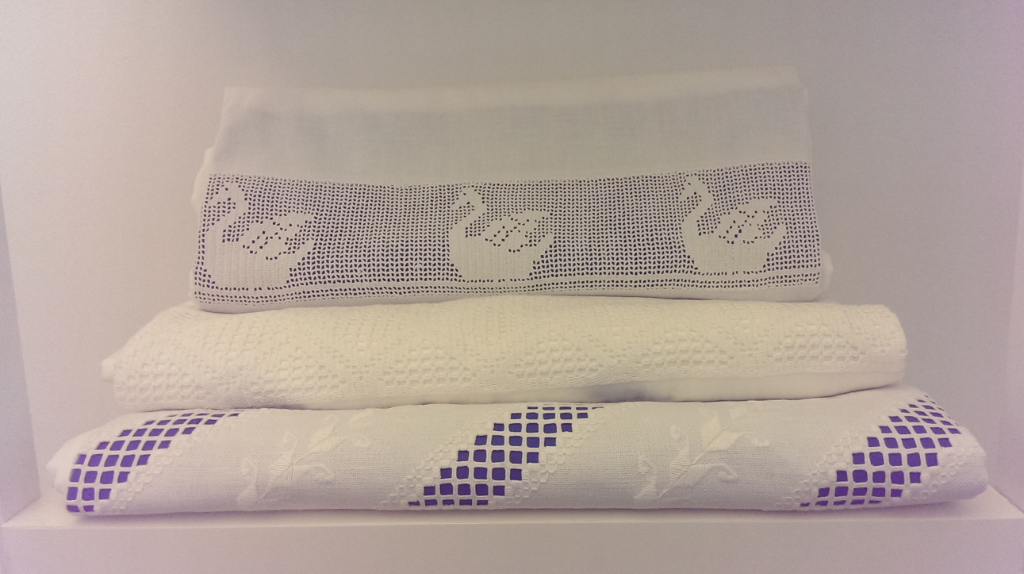 The patterns and designs were beautiful and the place was well designed with signs telling the story of the locals and their crafts, but the museum was closing so I had to leave.

On the way to the campsite I stopped at the local supermarket to stack on supplies. It was time treat myself so I got fruit, pasta, meat, cheese, bread and some sweets for the road on the following day.

At the campsite I prepared the pasta with mayonnaise and tuna. I was so excited and hungry, it seemed like a restaurant meal at the time (not so much when I look at the photos now): 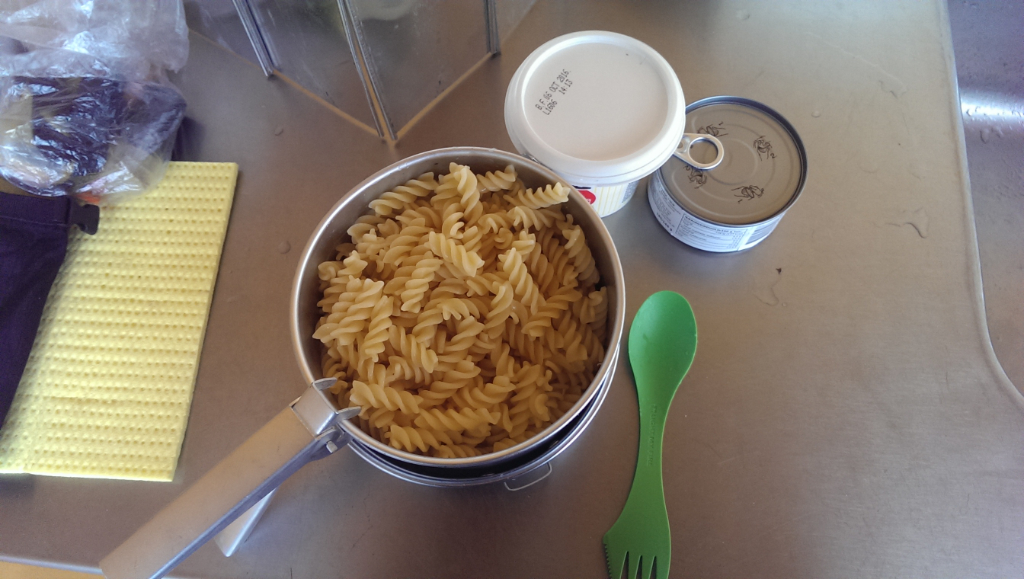 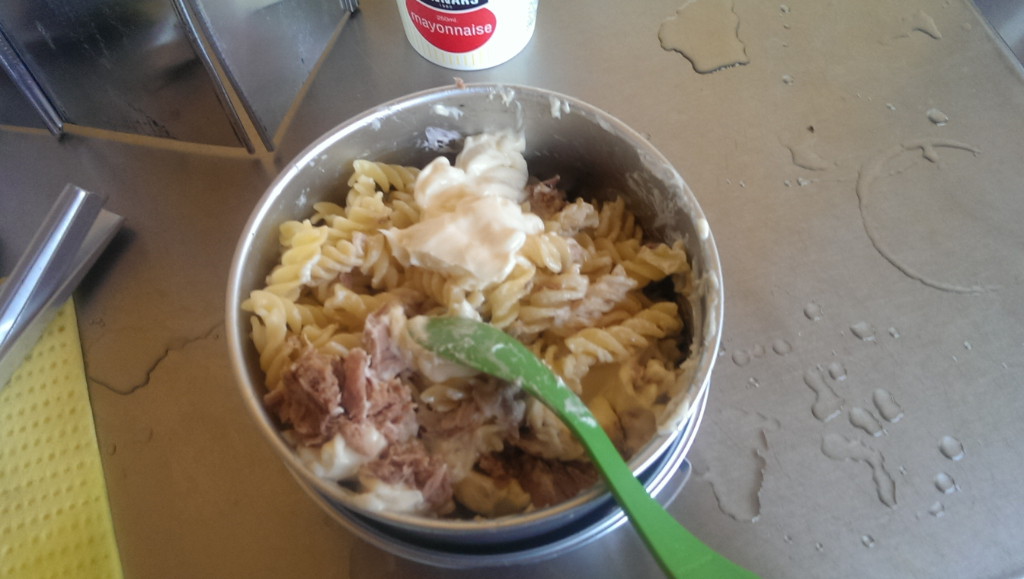 After dinner I made a huge pot of ginger tea and lemon with some honey and set to make sure my clothes are dried.

More people came and I sat on the outside veranda drinking my tea and observing them.

A snapshot from Google showing the outside kitchen and the showers. I was hiding under the veranda.

An Icelander approached to chat and prepare his dinner. He was a travelling photographer, probably in his 60s with a three year old shepherd’s dog. He told me about many amazing places that I should visit in the North. I explained that my schedule was tight, but I would love to come back again and visit them.

It is interesting, when people travel at different speeds they perceive goals differently and sometimes it’s not that easy to re-adapt them for others. It just goes to show that we each have a unique perspective on our environment and life at every point. But it’s important to keep in mind the principle and listen to others even if their perspective is not yours. It can enrich your experience.

The “Czeck guy” arrived as well (the one I met in the morning when leaving from Hvammstangi). He looked tired and after a short discussion I realised that the wind he had to face all day was probably worse that mine, on the day before. The weather was worse – colder, windier and with rain. I offered him some ginger and lemon tea with honey.

As I was sitting there, moving my clothes on the small radiator to make sure they dry completely, a cyclist arrived. He was with a reflective jacket, very shiny road bike (mega unorthodox), sun glasses and a scarf covering his face. He was carrying a backpack as well. “Interesting” I thought. You don’t meet many people touring with a backpack and a road bike. I greeted him and offered some warm tea. He was very friendly and asked me where he could pay for the night. I explained to him where the reception was and gave my suggestions about where I think he could put his tent so that there would be less wind, based on my experience from the previous night. He told me that he comes from Israel and his name was Elad.

Many more people stopped by or came to use the facilities and the conversations kept going. Normally I would withdraw to my tent, but after five days of loneliness it seemed like I needed the social interaction and appreciated it greatly.

The weather was turning for the worse, so I gather the dried clothes, washed the dishes and went back to my tent to get ready for sleep and the morrow.