I had a quick morning looking forward to the day of cycling ahead. I already skipped one of my rest days (a buffer I left for myself not knowing how my body will take the cycling). I didn’t want to take the next rest day either so that I have both of them for later if I needed time or had problems. 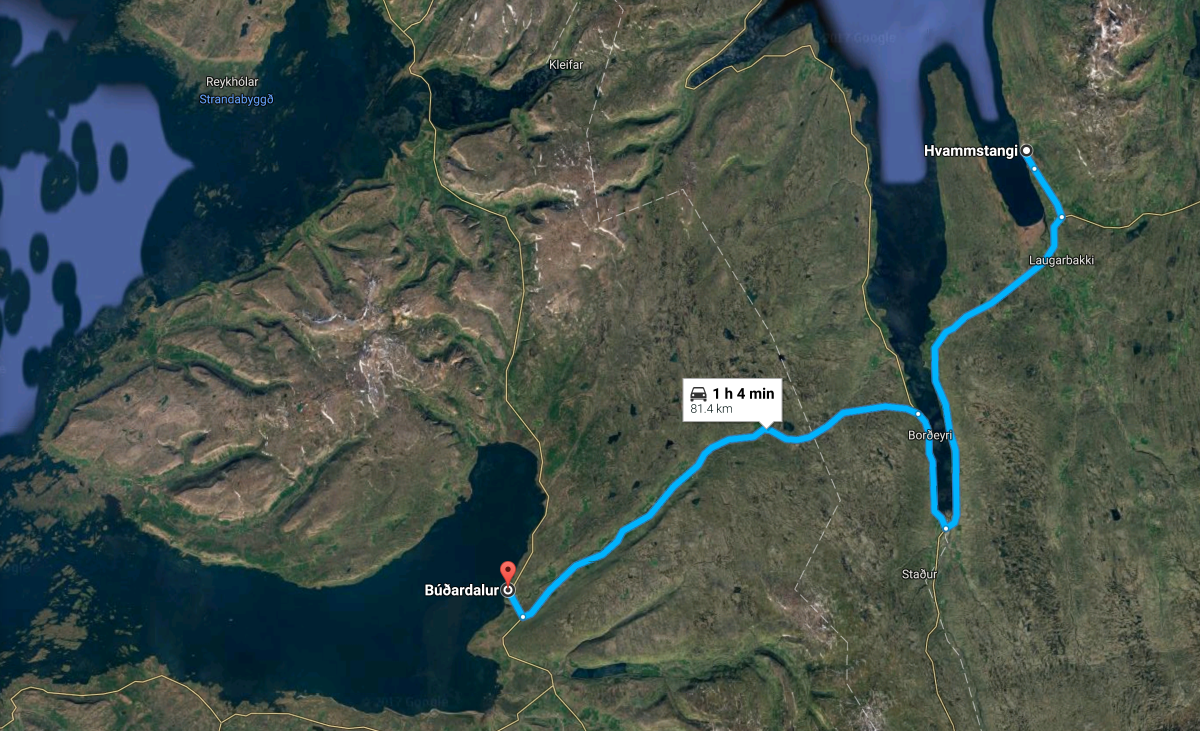 Just outside of Budardalur there was the steep hill I had to climb on the way in and of course the birds… I saw them hovering over so I put all my effort and went fast down the hill and as far away from them as I could. Then shortly after turned left to take the road to through the hills and into the next bay (see map above). 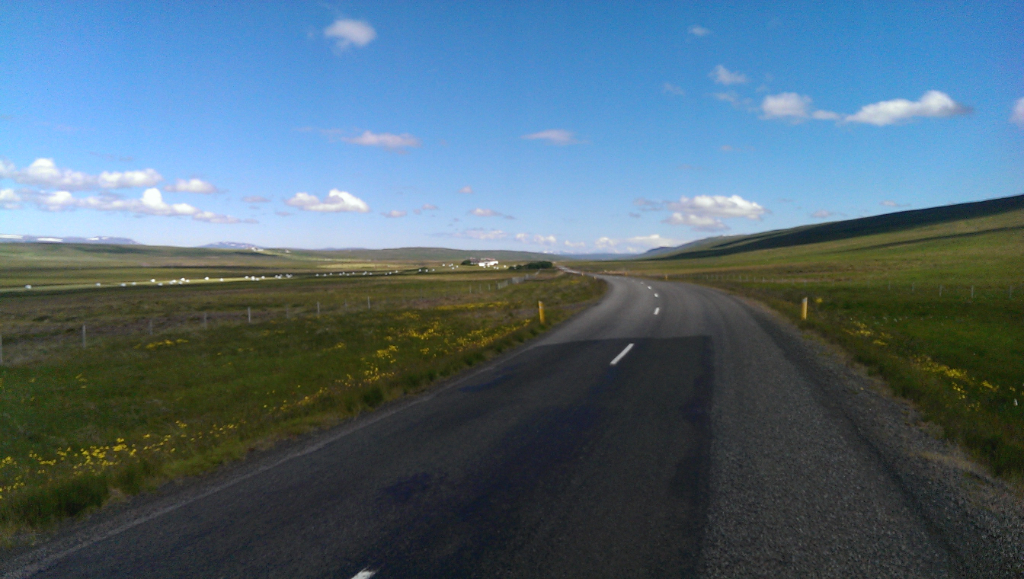 On my map it showed that the road won’t be paved the whole way and I was interested to see what it would be like. Would I need to push kilometres of unridable gravel or would it be decent enough to ride with my 37mm wide tires.

The day was absolutely beautiful. This is one of the most idilic moments I had on the whole trip – barely any wind, sun shining on me, the road was flat-ish and easy going, sheep grazing on the green hills around, the occasional farm house. It was totally enjoyable. 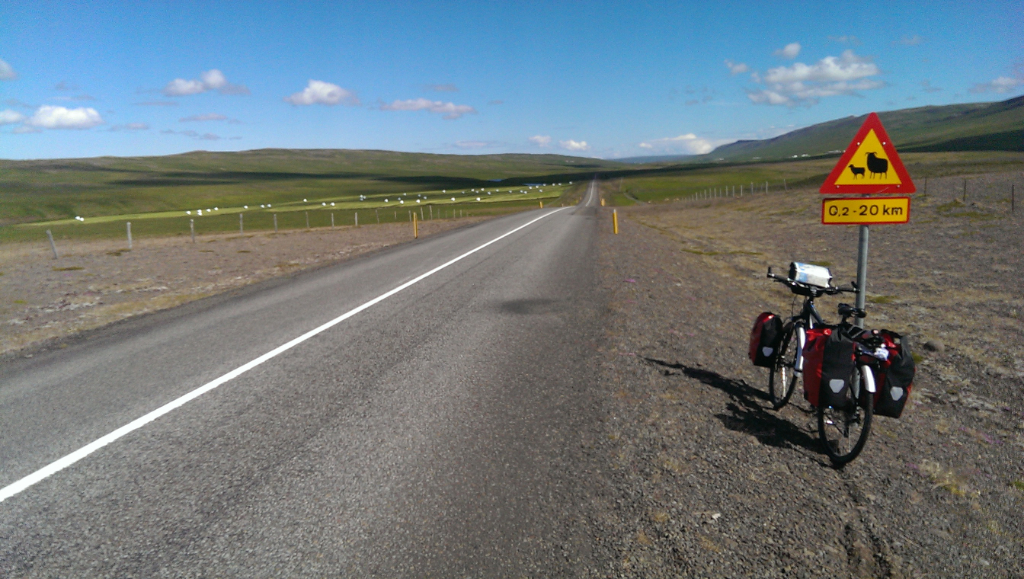 The road went on and on with rolling hills, up and down, up and down without any major climbs. It was actually fun to ride. I saw a few people on the side of the road, a guy walking his dog, probably from a nearby farm and we exchanged greetings as I zoomed past. Another family had stopped the car on the side to enjoy the views and the nearby river. 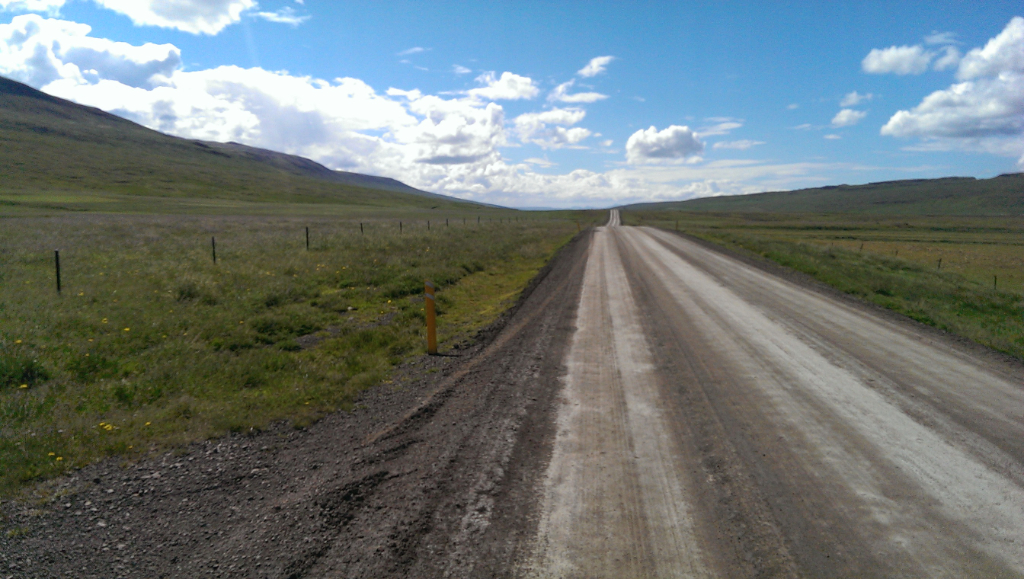 The hills rolling behind me 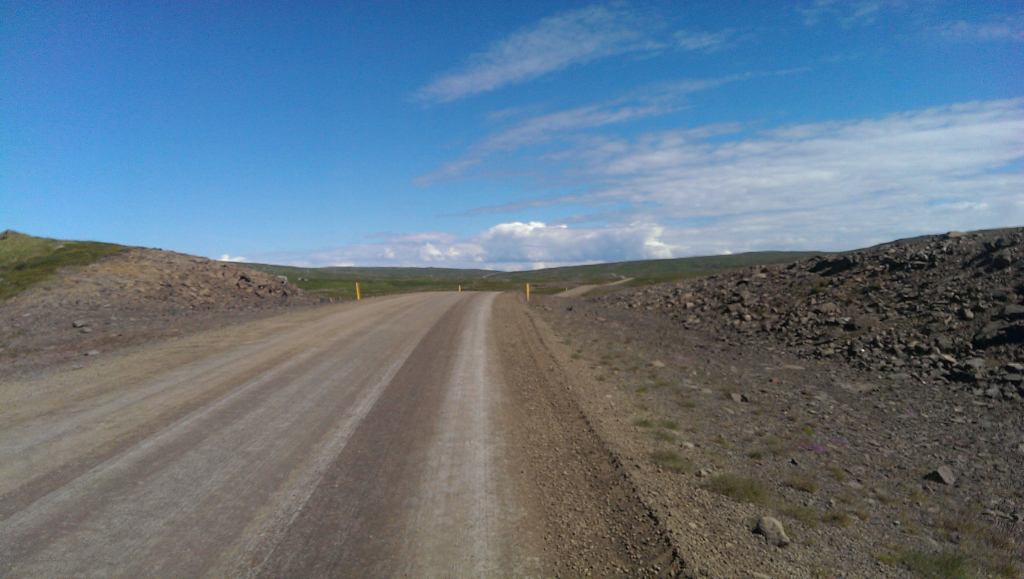 The hills rolling ahead of me

The road changed, but it was not just gravel. It was a mix of gravel and very fine dust and sand, very well packed down. I barely felt the difference from the tarmac in the beginning and continued with a decent speed. 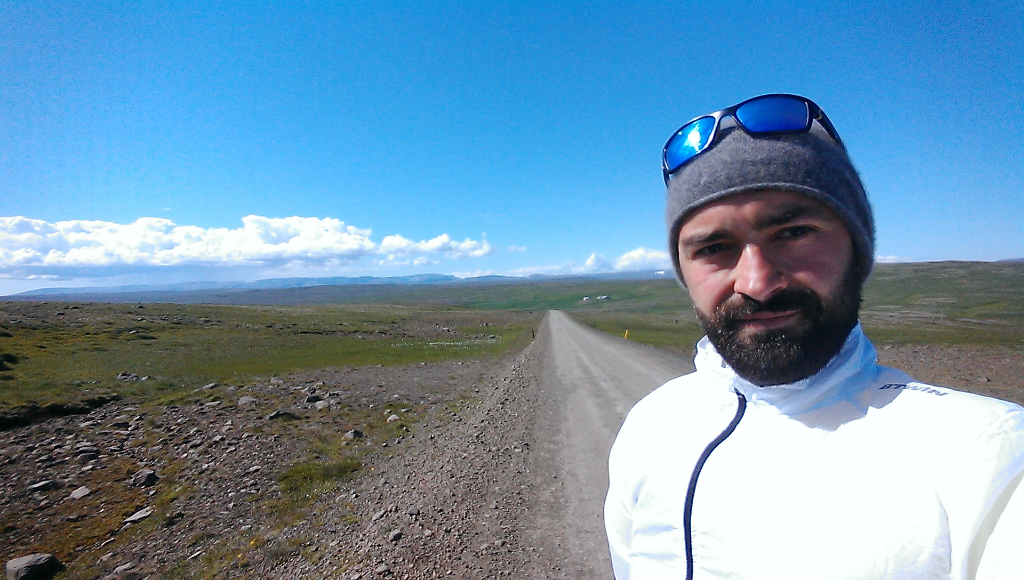 Even though the sun was shining and I was climbing hills it was cold, so I kept my hat on.

I was alone on the road with the exception of a few cars, maybe one per hour. The sheep were at the centre of road, on the sides as well, feeling like the kings of it all. There was a magnificent moment when I climbed at the highest point and the clouds were low, so it seemed like I am surrounded by them and the road ends into the cloud at the horizon. 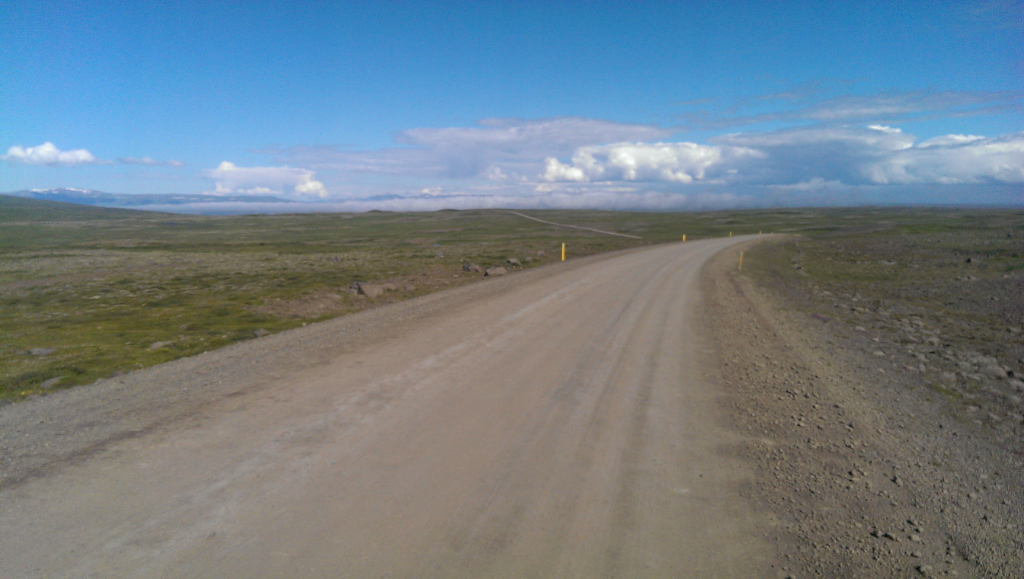 When I came off the mountain it was a very fast downhill on the dirt track. A bit dangerous with all the grooves and stones (and my luggage on) but I tried to keep it fast as I knew there’s still a long way to go. I joined the main road just before Bordeyri (a few houses next to the water). It was a steep downhill with a strong tailwind so I switched to the lowest gear, went low on the handlebar and pushed it as fast as I could – so much fun! I think I went just over 48km/h then.

The next 8 kilometres passed in an instant, but then it hit me – the wind. I was at the edge of the small fjord and had to turn on the other shoulder of the bay. This meant headwind and from zooming down without much effort, to facing it the contrast was huge. It’s the same as having a sunny day and suddenly being in a rain storm.

I sat for a moment to have my lunch and prepare for the difficult progress ahead. I hid behind the road in the low, laying almost flat again (as there was nowhere else to hide), eating my bread, cheese and salami delicacy with appetite. No chance to turn on the stove in the wind, it would go out instantly. 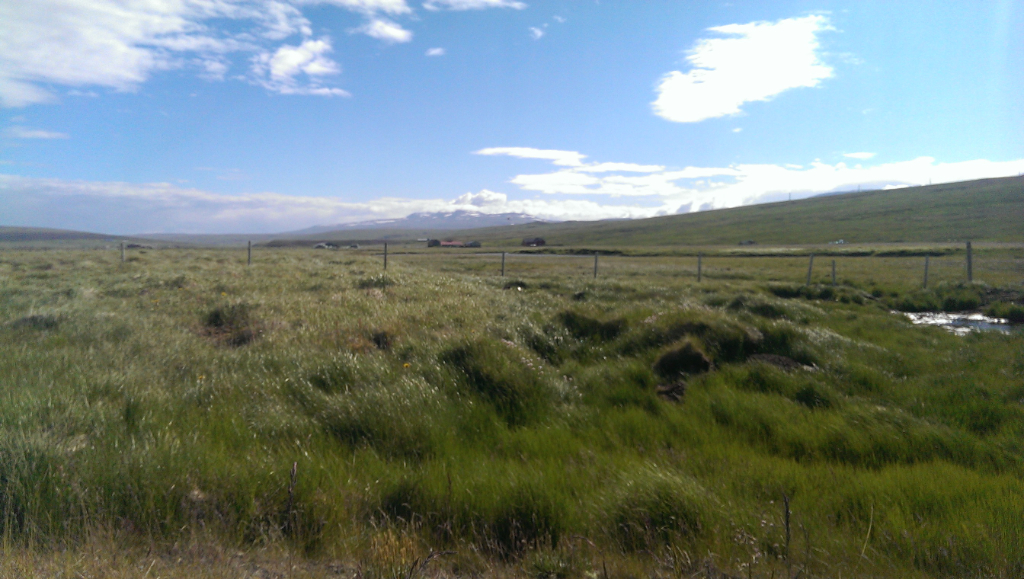 Notice the grass moving from the wind.

Not only did I had to face the wind now, but it was also uphill. I stopped noticing the sun and focused entirely on developing a rhythm with the pedalling. As learned through the previous days I started to count the white lines on the side of the road, each of them feeling like a small conquest and getting me closer to the goal. I don’t remember exactly, but I reached around 1300 in my counting at some point. Then I would loose the number while drifting in my thoughts and start again. 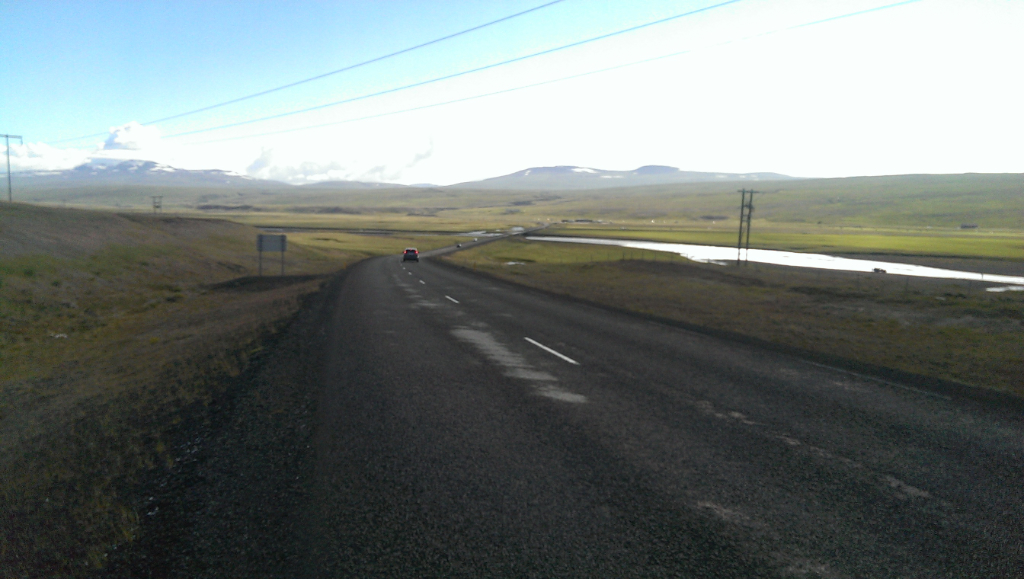 Two cyclists went past in the opposite direction, enjoying the tailwind. We waved a greeting at each other and I went back to my concentration on the white lines. 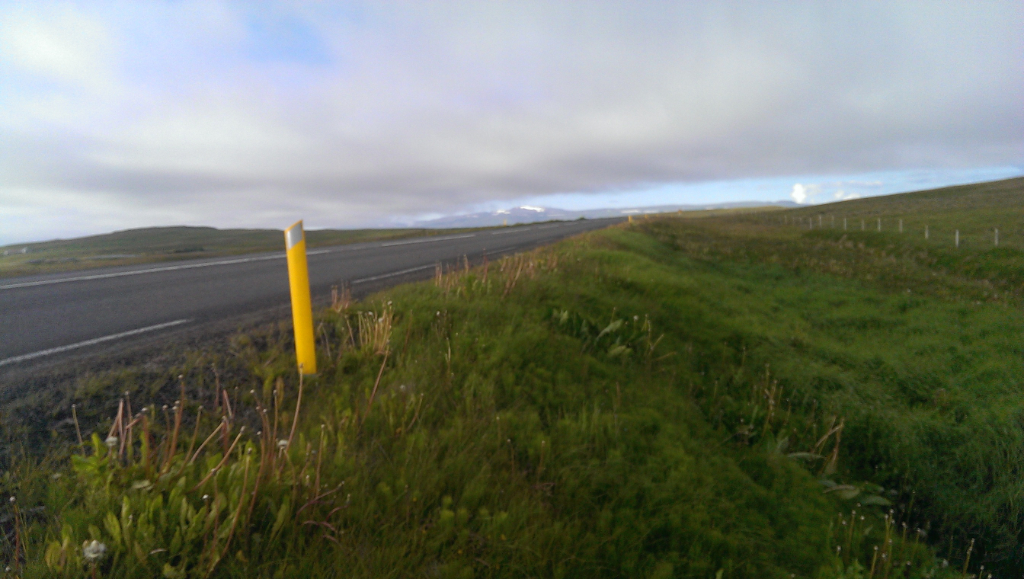 It is a lonely business this cycling around Iceland. Not that I mind my own company, but when things become though you start to question your motives and to wonder why you are in the middle of nowhere, pushing up a random series of hills that never seem to end. Why not abandon the whole enterprise and go back to comfort?

I think this is the critical and most valuable moment in these challenges one can set for themselves. You face all the doubts and then discard them, keeping the move forward – it is rewarding! 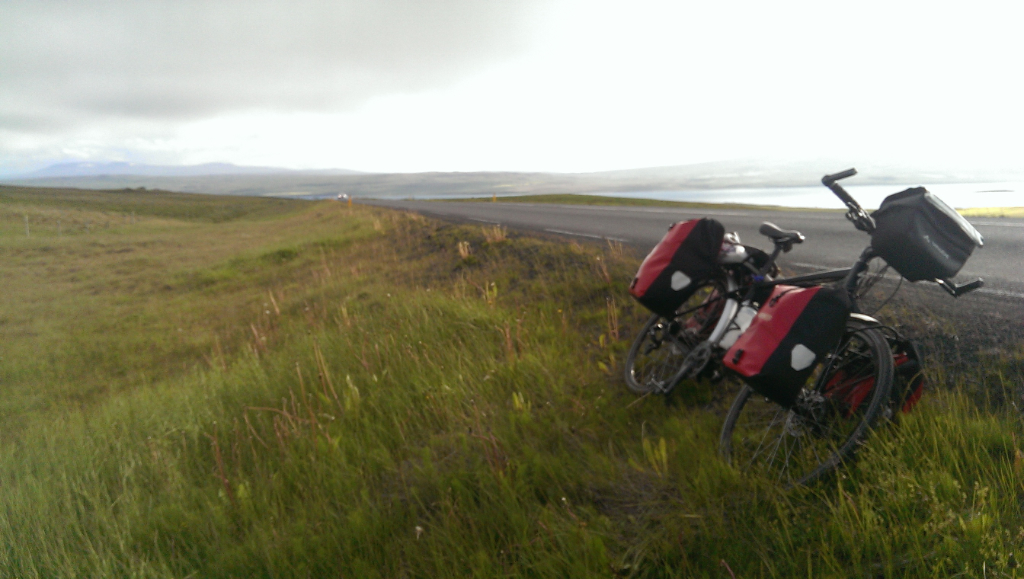 After a gruelling few hours of slowly pushing the bike against the wind up the hill with cars and trucks passing by, of slowly, pedalling I managed to reach the junction of the road that turns toward Hvamstangi. But that wasn’t the end, I had another 6-7 kilometres of cycling even more directly into the wind (look at the map above). However, I could feel I am getting close and a burst of energy came to me. I stated to look around more and to enjoy the landscape and the light once again. 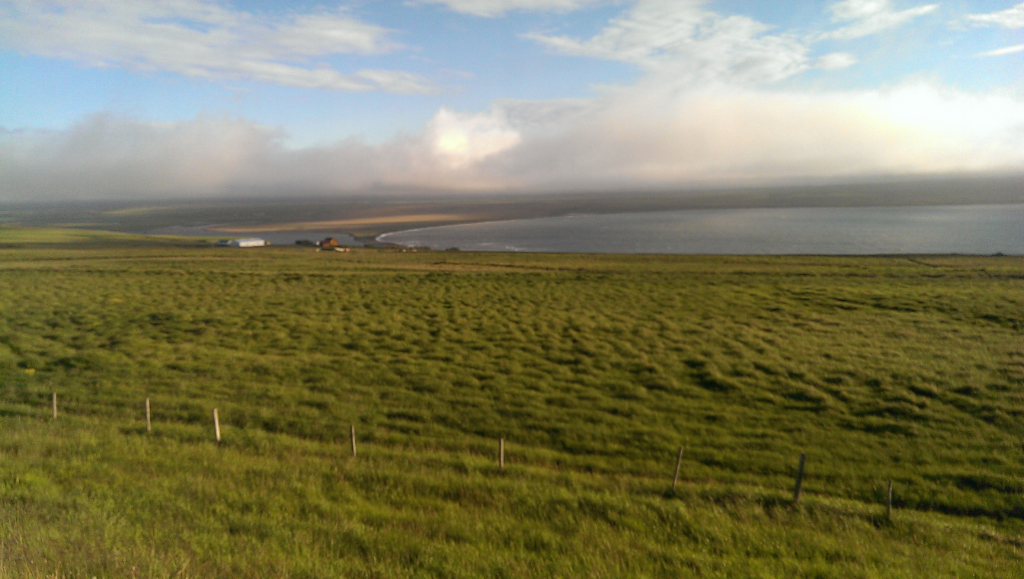 Finally I reached the small town / village (depending on who you ask). I passed through and asked a few people about the campsite (on my map it was a massive tent sign covering the town area). Some of them didn’t know a campsite existed, others didn’t understand my questions (and gestures), but finally I got to a set of signs and followed them up the steepest of hills. You must get one of those at the end of the day to make sure you can sleep right, that’s my theory behind understanding the Icelandic landscape… 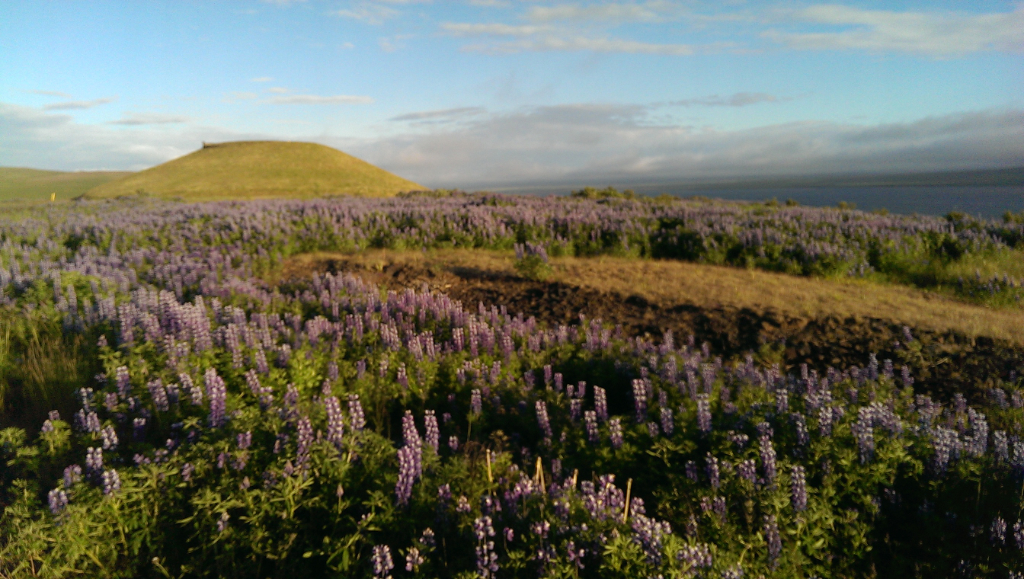 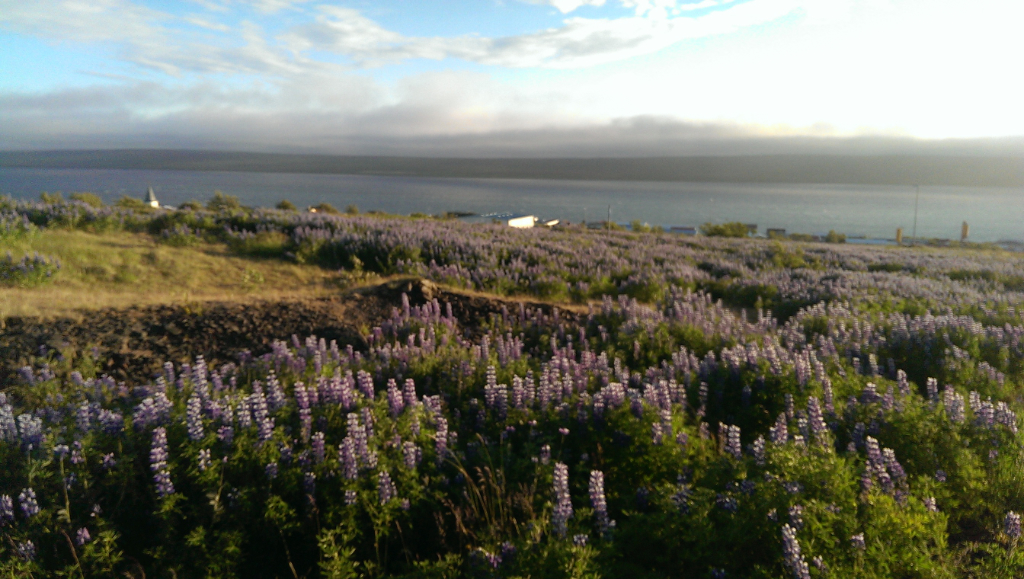 A view from the top of the hill. You can notice a roof of a building from Hvamstangi.

At the top finally was the campsite. A nicely sheltered place. Eagerly I approached to hide from the wind. 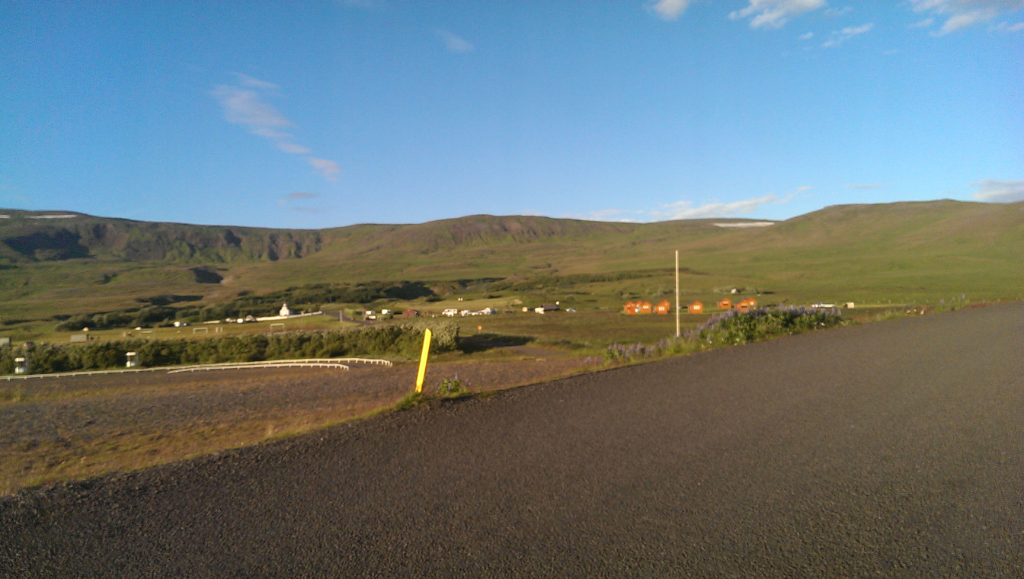 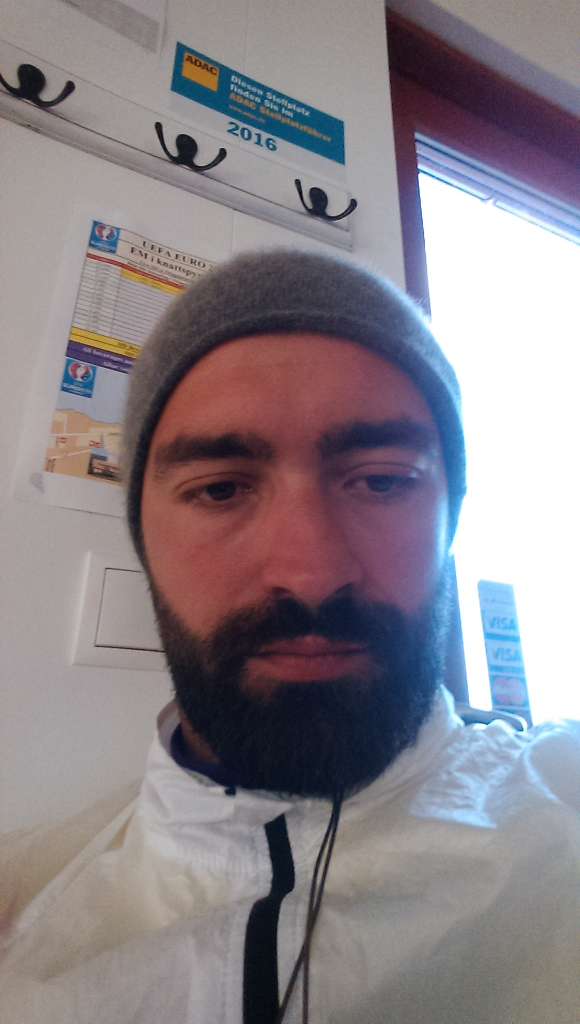 There was barely a place to sit in the common room, but I didn’t care, I found a chair and sat on it for at least half an hour, slowly defrosting. I didn’t care about the smell coming off from all the sweat I had been producing all day. The rest felt well deserved.

I went out and put my tent up, showered and came back in the room to cook and eat the usual pasta meal.

All the plugs were full of devices to charge, but I needed to charge mine as well, so I waited until late to get my turn and to leave the devices overnight. Most people went to bed and I was left with a one guy on his laptop and a woman. I don’t remember how but we entered into a conversation. The guy was from the US travelling with his family. He told me that once he travelled across Europe all the way to Istanbul on a bike. The woman was from Switzerland. She said Iceland was beautiful but very expensive (even for a Swiss). She was just driving around for 4-5 days (coming back anti-clockwise – the way I was going). She had an interesting book with Icelandic tales: 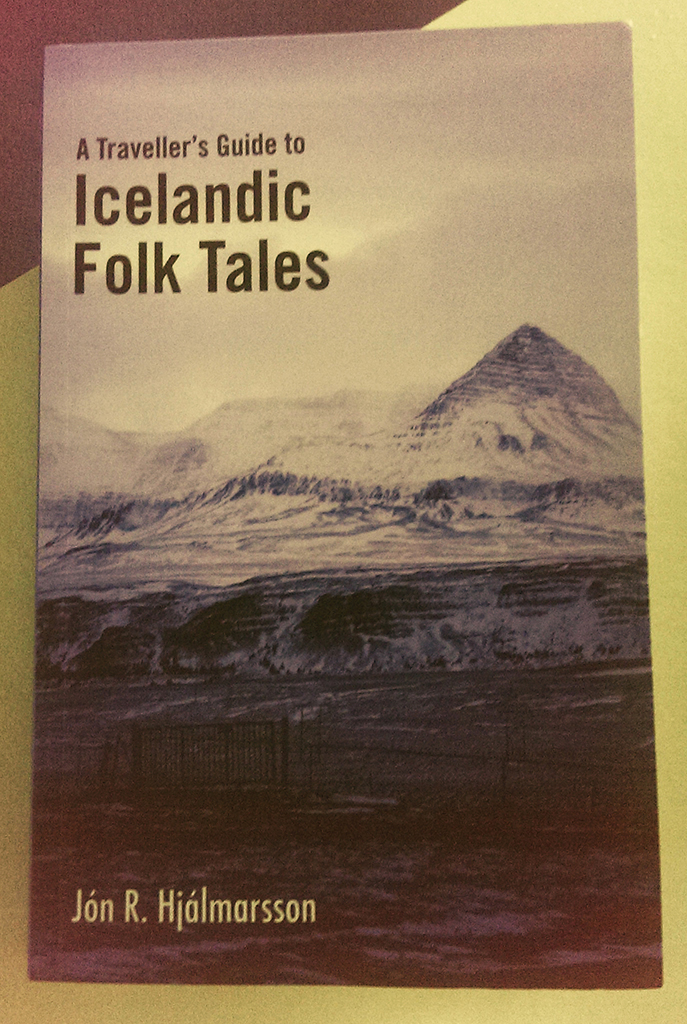 The more I spoke to these (and other people that day), the more I appreciated the privilege of having the experience I was having. I knew that for some people it was an impossible thing, for others a trivial endeavour, for some a dream. I was just grateful that I am there and doing what I wanted to do. Even with the difficulties that come with that decision, I was still glad for being able to do it and excited for the days ahead. 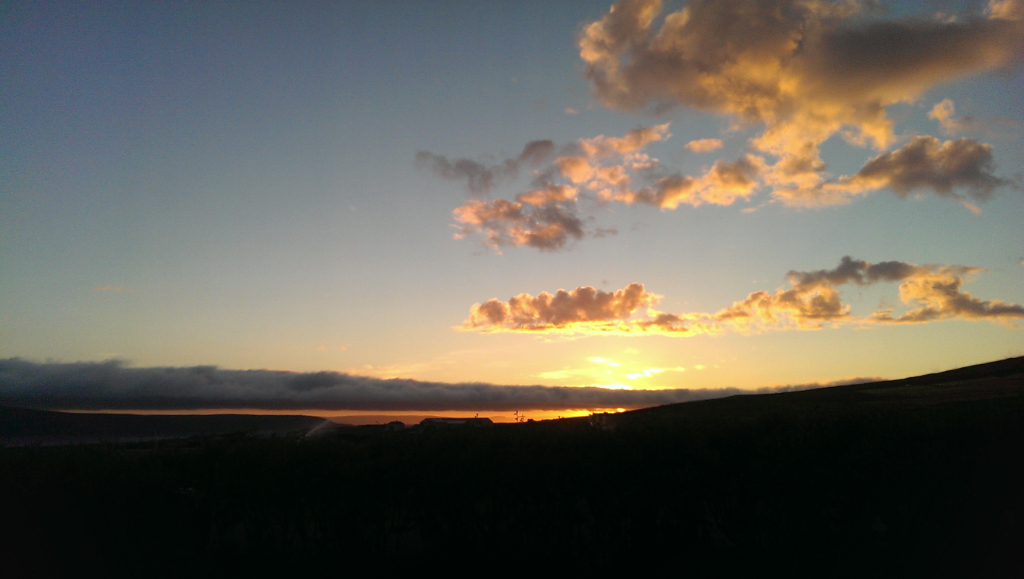