I know there haven’t been much articles posted in the last 5 weeks, but that’s because I went to cycle around Iceland. This is the first of a series of articles that will describe the trip but also help me reflect on it. I will be posting the days one at a time more as a personal diary and a future reference, but also for anyone who is interested to follow.

Quite a few times the question came up “Why cycle around Iceland?”. I don’t know exactly, but there are a set of reasons that brought the idea up. After injuring my ankle and removing the option of walking long distances with weight on my back I looked at cycling. I love bicycles and a year before I started to read a lot on touring. I did a short trip in Bulgaria for three days and I knew I wanted more. Iceland was also on my list of countries to visit (obviously because it is in the North) – a beautiful place with stunning views and harsh weather. At the end of 2015 I read the travel notes of an elderly couple who had cycled around the island and the seed was planted. In January 2016 I was fully committed to the idea and all the preparation was on.

There is no clear reason, but I felt like a challenge is needed in my daily routine. I needed something to refresh my experiences and to bring a reset.

From the beginning I knew the trip will be hard. I had no real experience of cycling long distances day after day. The weather in Iceland is… well… in Iceland. I started training regularly both cycling to get used to my bike and high intensity interval training sessions.

The gear began to come together and here is how it was packed before the trip: 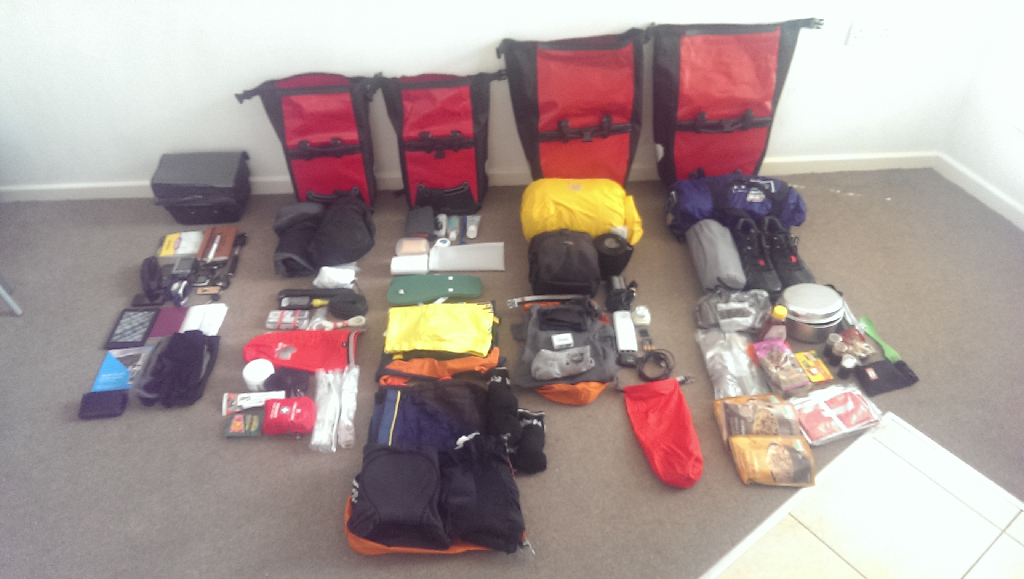 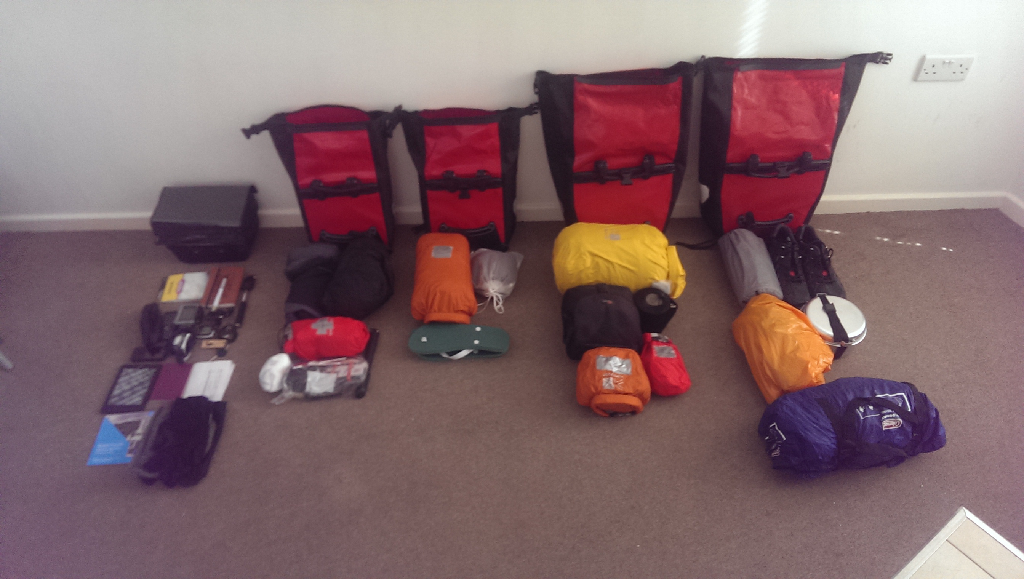 If you want a detailed list of the gear, please let me know in the comments and I will provide. In the last post I will also go through what I think worked and what didn’t. Overall I think I was well prepared, but quite a few mistakes were made as well.

Till the very end of this trip I didn’t know if I will finish it. Till the moment I was on the plane I wasn’t sure if I should go. It was not one of those trips that you go and you know you can do it (for me at least) or while you are doing it, you are thinking of “what next”. I had a lot of issues before leaving which forced me the buy the tickets just two weeks before leaving. This includes breaking a wrist, personal problems and other little struggles that just kept creeping in. I wouldn’t have gone for it if it wasn’t for the support of my girlfriend who gave me the final push through the door.

Actual time refers to the total time from leaving point A and arriving at point B. The riding time is the time spent in movement on the bike between those points. 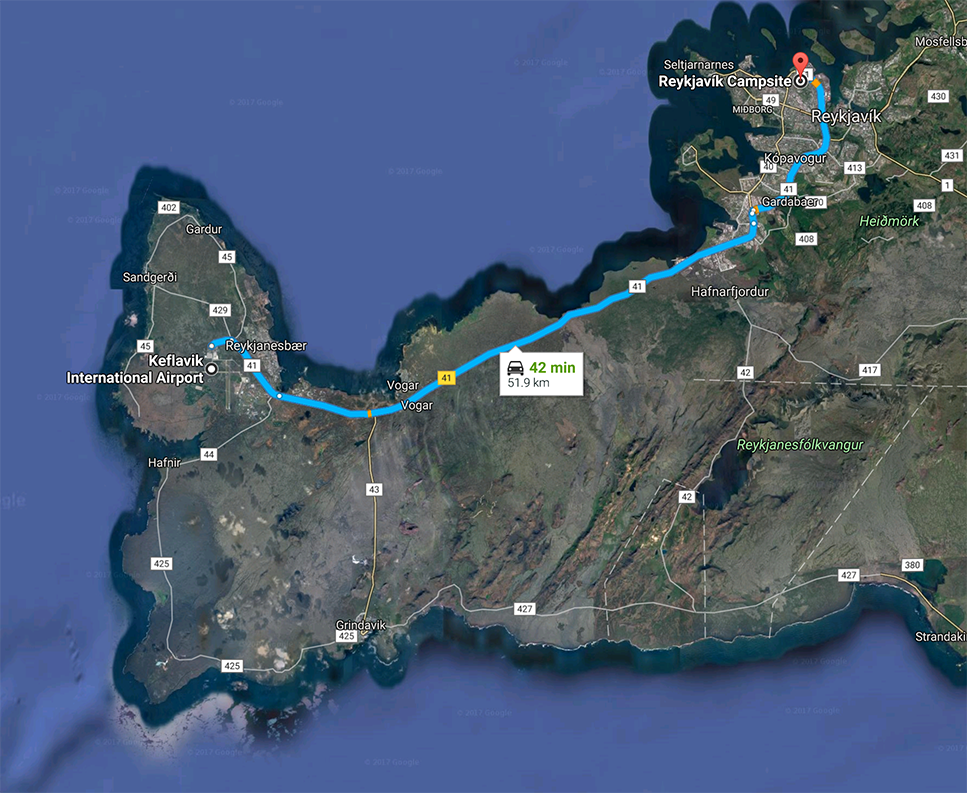 The first day of the trip was very busy, or it felt so. Driving with a friend and Andra to Manchester airport at 3am, packing the bike, unpacking, etc. When landing the stewardess said that the weather will be nice with a light breeze. I knew it will be sunny, but as I started walking down the stairs the wind was fairly strong and cold. I thought to myself “light breeze… what would be a regular wind then..”.

Reykjavik airport is really strange – normally at airports as soon as you land you have to go through passport control and then get your luggage. At this airport once off from the plane we went straight through the crowd of people waiting to get on the plane, then we were basically in the airport, I could just get on a bus and go to the city. But I walked to the other side of he airport to pick the luggage. A very friendly staff member gave me the bike and also waited until I changed into my cycling clothes. 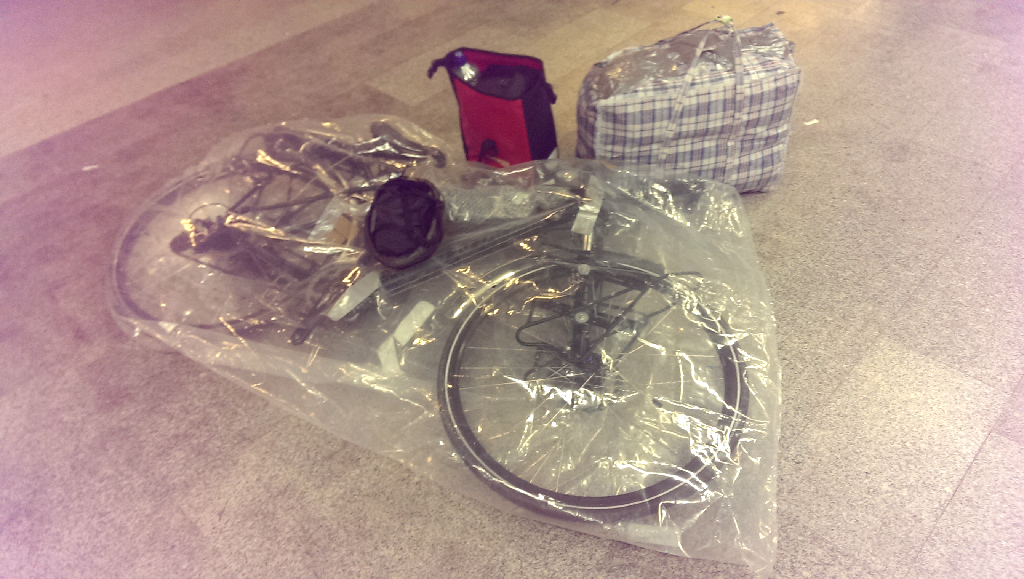 The bike was packed in a plastic bag (for bikes) because first it would be expensive to store a cardboard box and second I read that staff at the airport handling boxes are less careful and if they see the bike itself.

The bike was prepared for riding outside of the airport. The wind was running through my bones and I couldn’t wait to start moving to get warm. A girl from London passed by with a bike. She had just finished a part of the island in the western fjords and I remember one thing she said “The wind…. it can be tough at times”.

Not long and I was cycling on the main road towards Reykjavik surrounded by fields of lava frozen almost as if in their movement, covered like a blacked with moss. 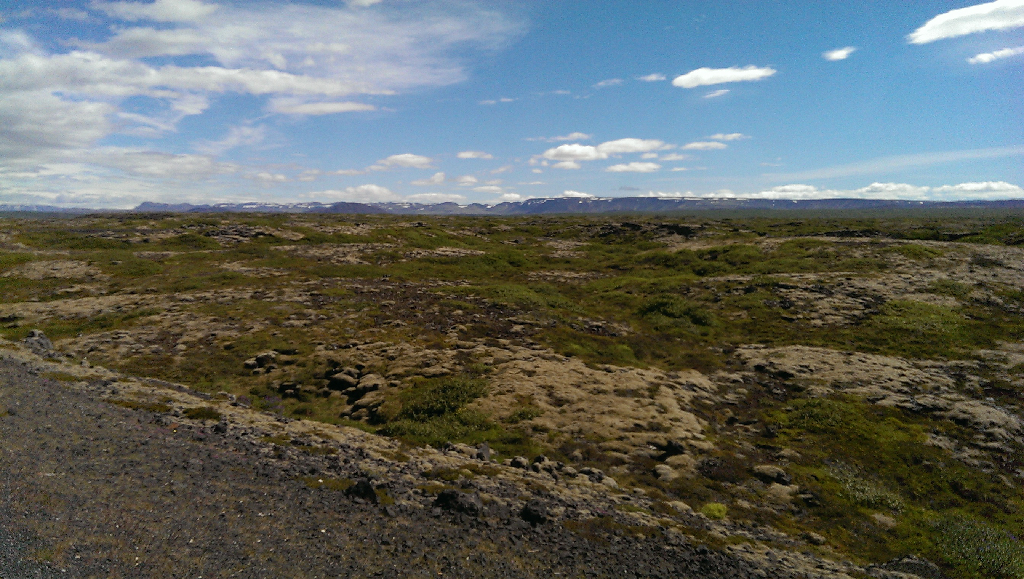 The road was very busy, maybe one of the busiest in the country. It felt like a highway but luckily there was an emergency lane in which I was riding with plenty of space to be undisturbed by the traffic. The weather was on my side, as I would later find out a very rare and beautiful sunny day. There was wind but I didn’t really feel it. 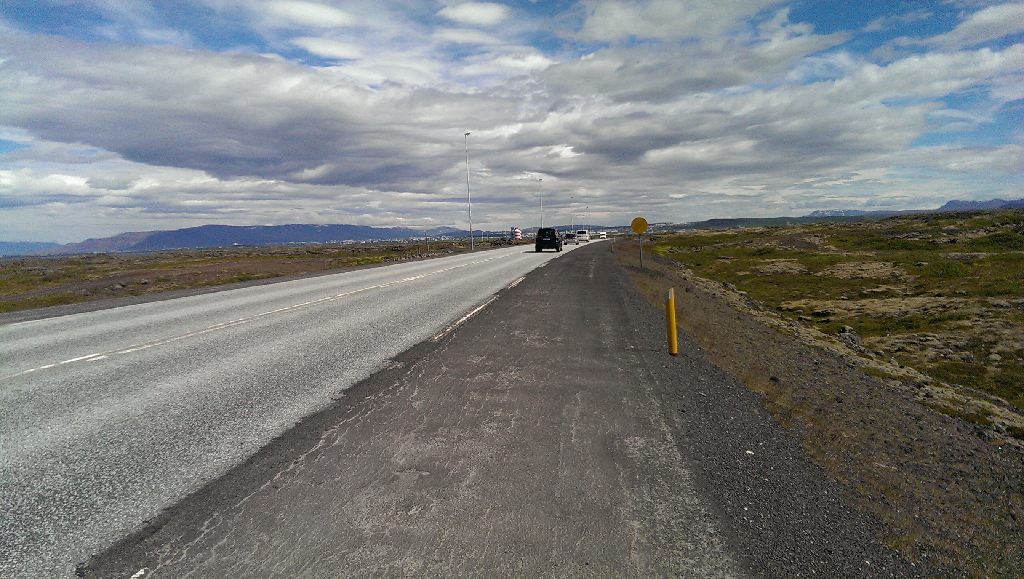 I was adjusting to the bike, the seat, the weight (only rode about 30km before that with all the weight and I broke the wrist on that ride..). I had cleats for the pedals but I was too afraid to clip in. The wrist was sore and I was trying not to lean too much on it as it was painful, but apart from that the ride was enjoyable. I was starring into the mountains in the distance and was excited to get closer in the next few days.

Suddenly a really sharp and deep pain appeared at the back of my left knee where the tendon runs on the outside of the leg. It was excruciating and it forced me to stop. I stretched the leg and pressed/massaged the spot. After a few minutes back on the bike the pain appeared again, it was unbearable, I couldn’t press on the pedals. Really? Would the trip end even before it had began. I felt really down and disappointed, but kept moving. I had to stop a few more times to stretch it just to be able to continue. At some point I realised that by adjusting my feet and pressing with the very end of the toes I didn’t have so much pain, so the rest of the trip continued in the new position and I also lowered the seat so as not to extend the legs so much.

After a few hours of highway and flat lava fields I arrived at what was the beginning of Reykjavik. First factories and then houses and blocks of flats started to appear. The road became even busier and at some point I put Google Maps and switched to bicycle and pedestrian lanes which brought me to the campsite. 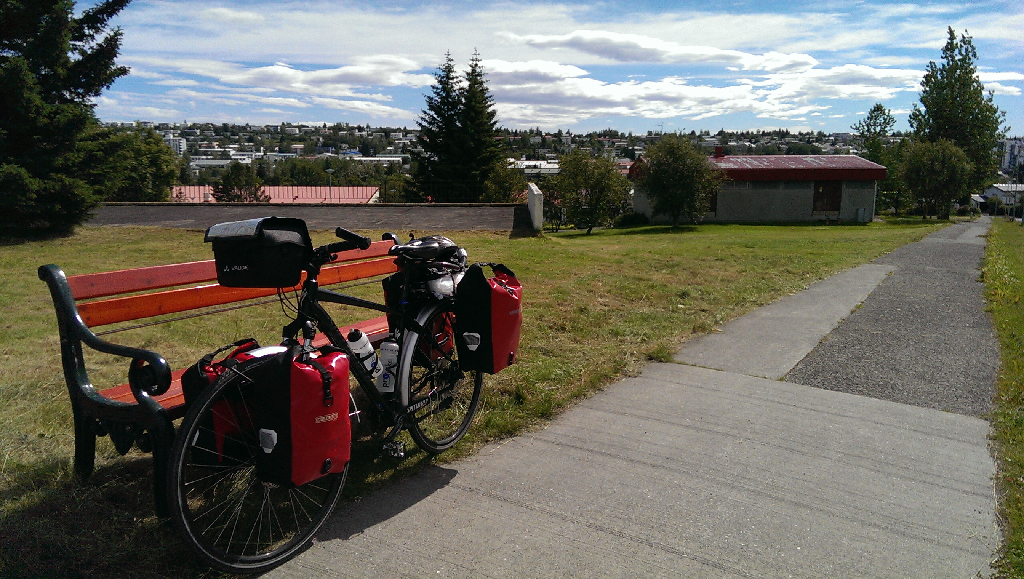 I paid, put my tent up, had a shower and sat for a while to let my mind and body rest. Then I arranged to meet a colleague from the UK who was in the city at the same time.

I took the bus as the knee was still painful and I wanted to give it a rest from riding (the day after was going to be a long 120km ride). At the campsite they told me the bus will go straight to the meeting point, but after a while me and a few other tourists realised it is not going on the usual route. We asked the driver and he explained that it is because the centre was closed for the football match screens. This gave me a nice opportunity to walk around the town and share a few words with a young swiss couple on the way to the centre.

You could see the crowd gather to watch the match from far. 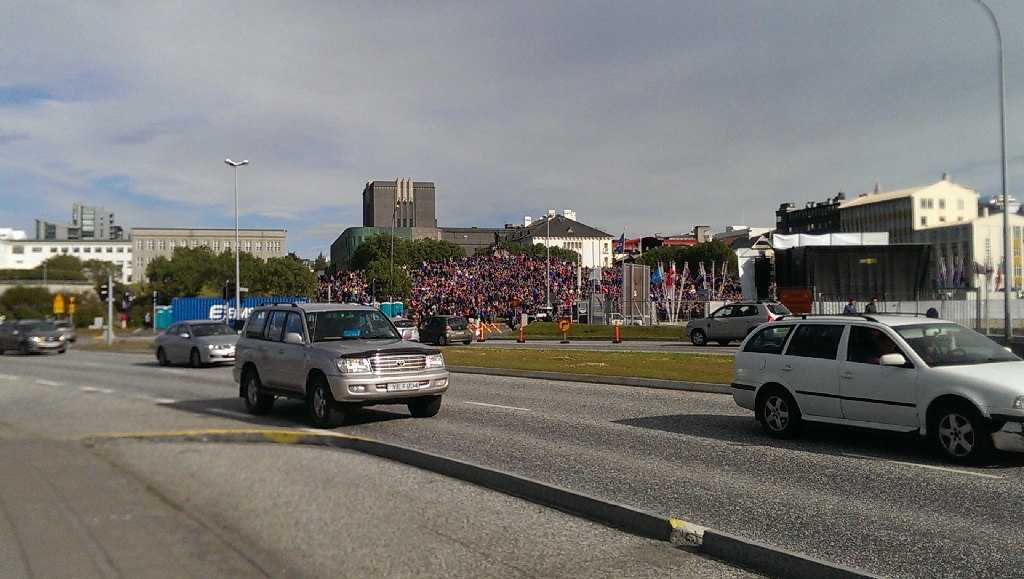 The atmosphere was great, everyone were doing the characteristic clap with the hands, singing songs in Icelandic. 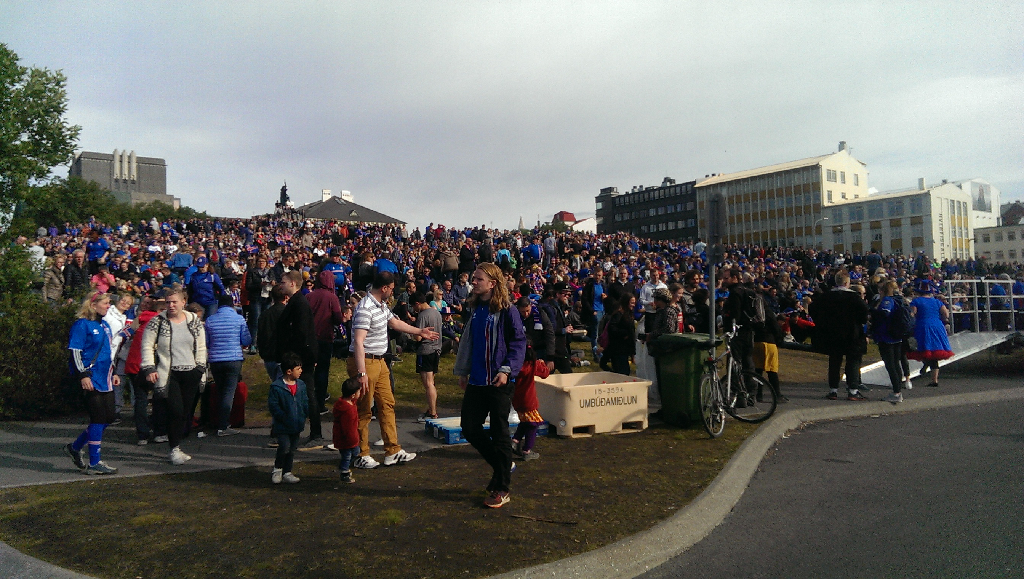 At that point I was starving and I met with my colleague. We went for a walk around the town and he took me to one of his favourite coffee shops for food later continuing with beer to watch the end of the game. 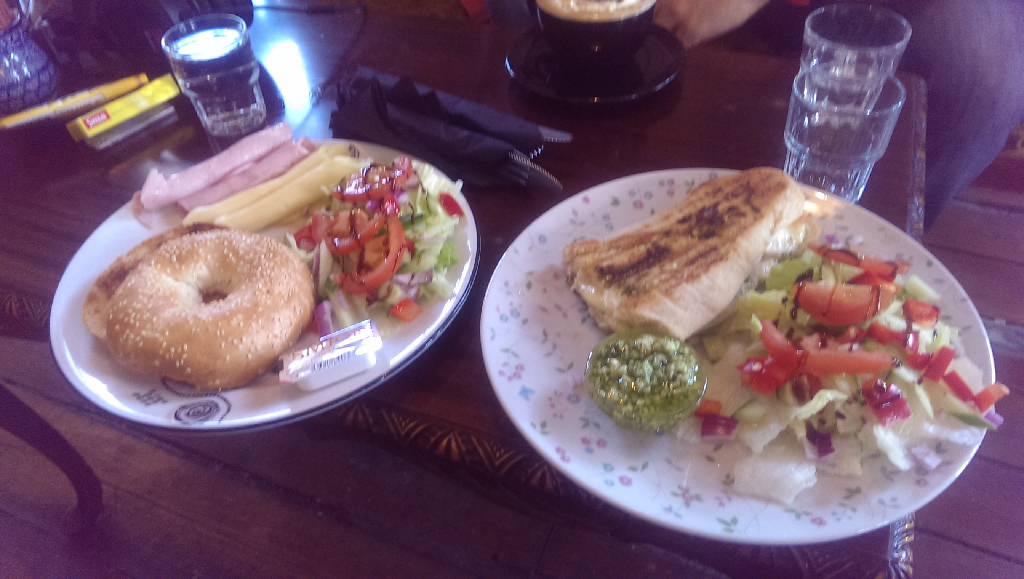 Both meals for me of course

The atmosphere was so intense, you could hear how everyone are holding their breath. When Iceland scored the room exploded with such a loud sound as if a thunder came in.

Later we took a walk around the centre and continued back towards the campsite area. Here are some random photos from around Reykjavik: 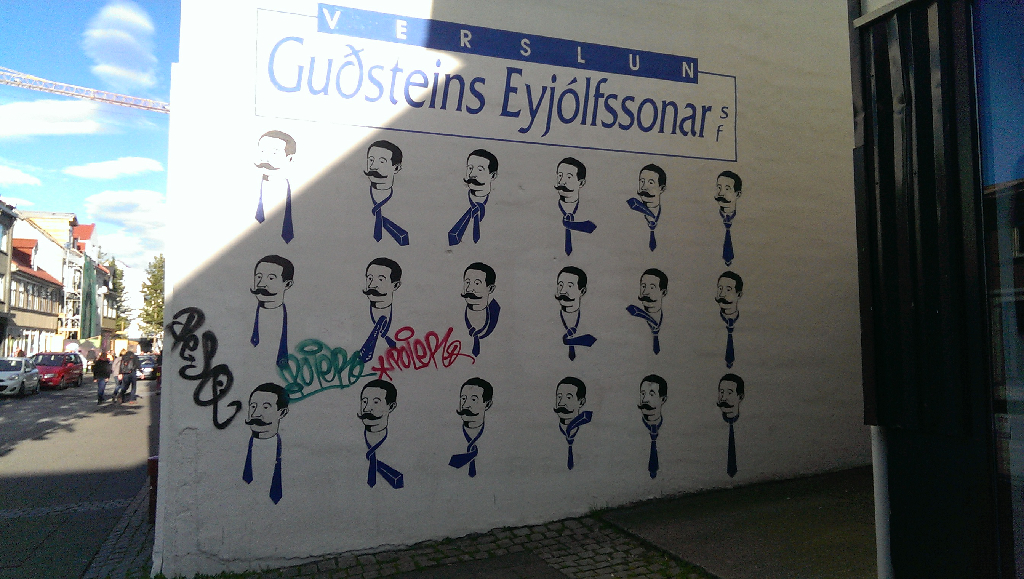 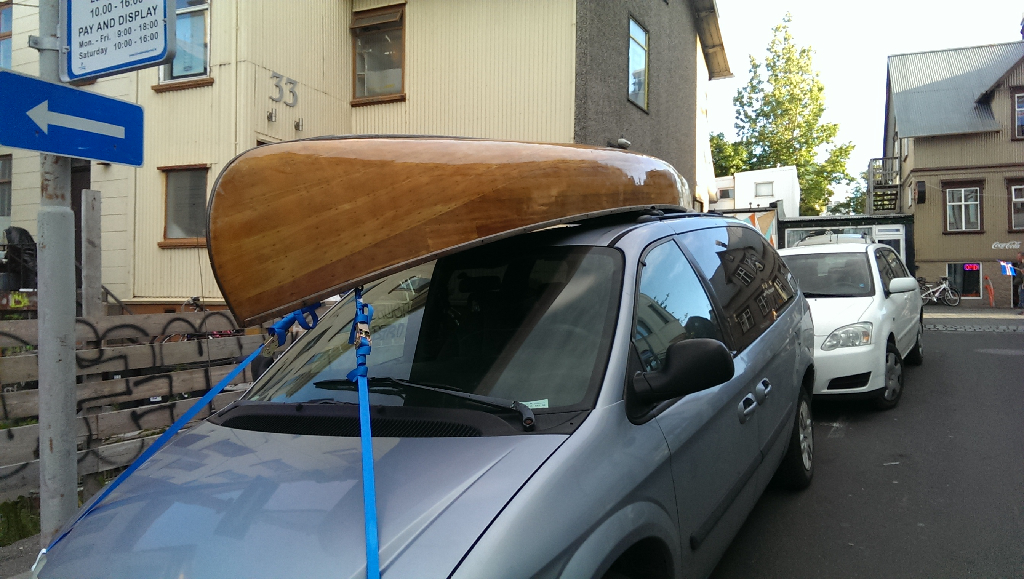 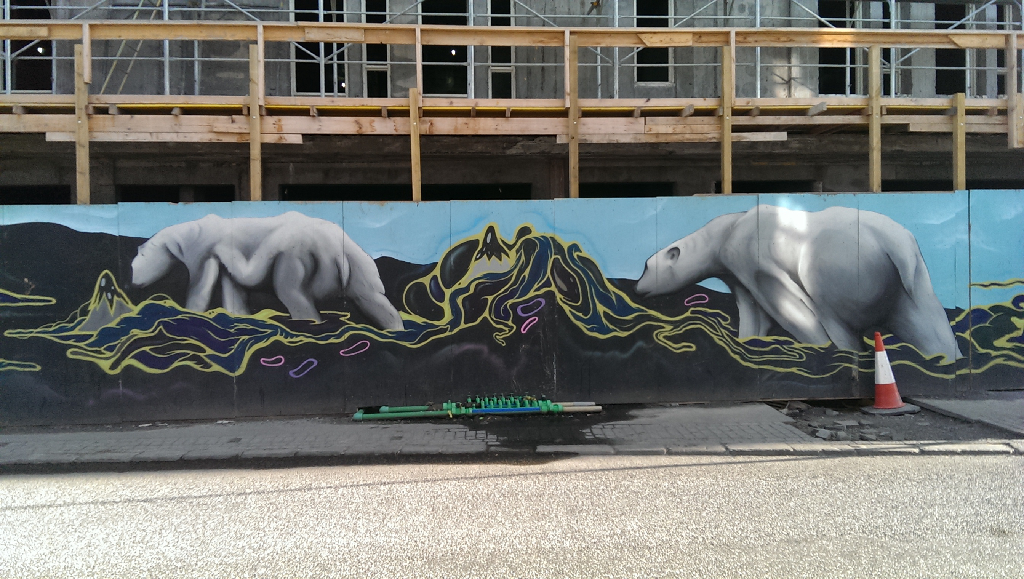 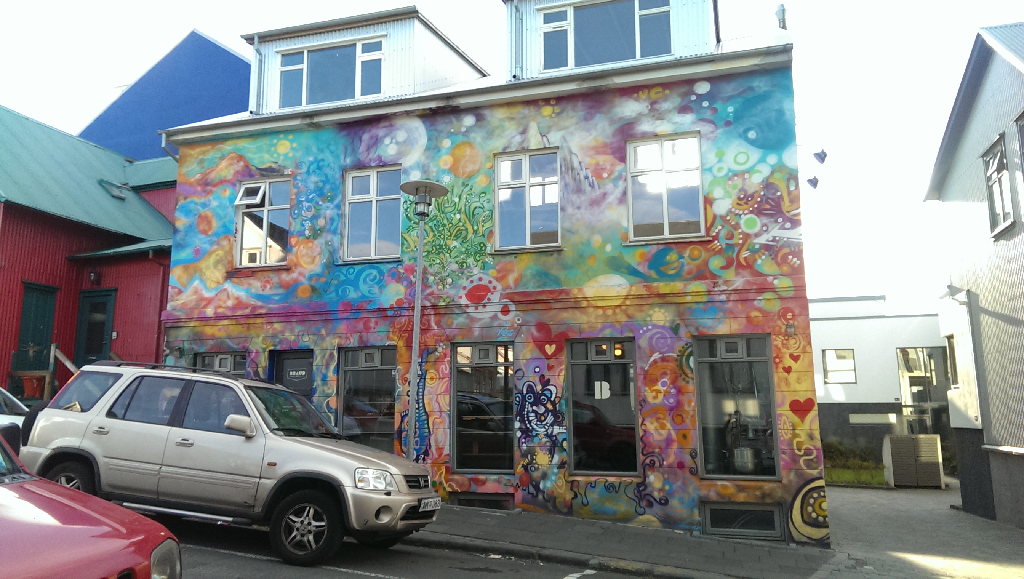 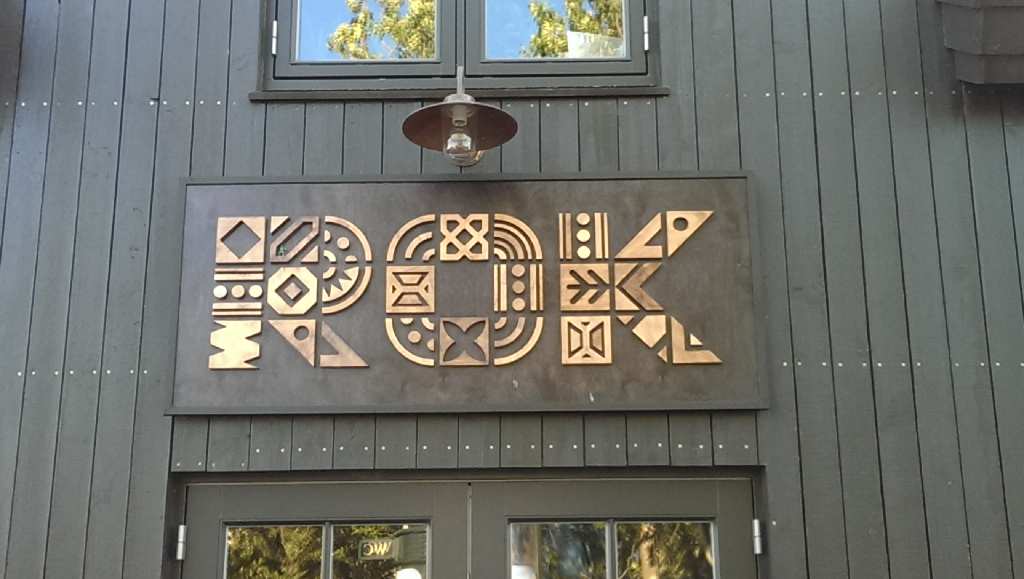 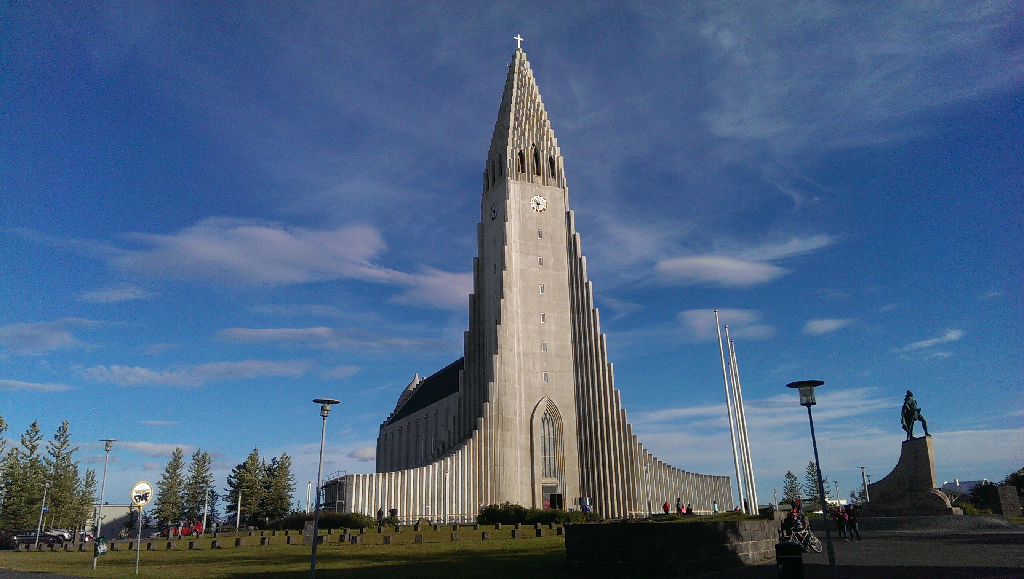 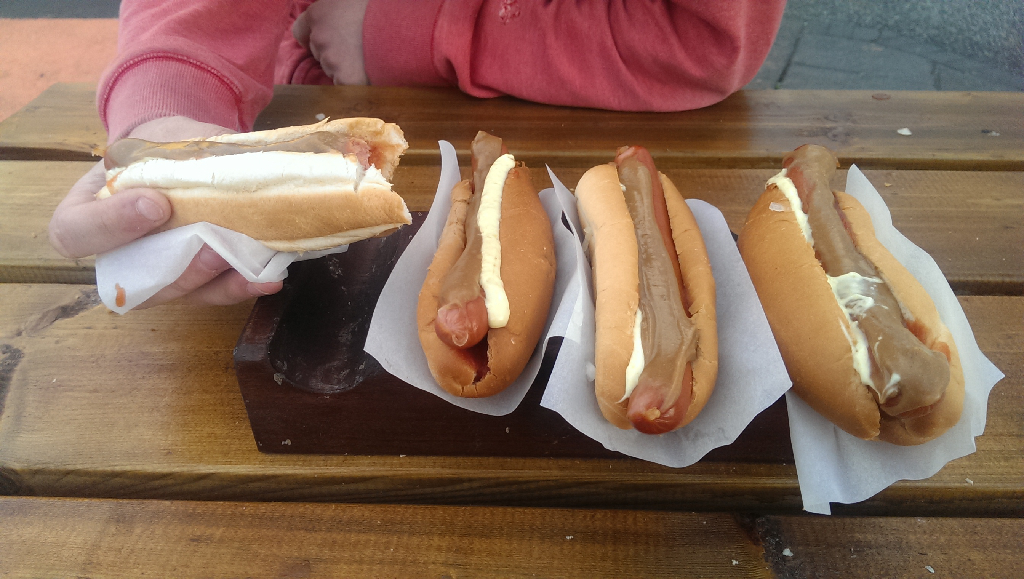 Of course we had to try “the best hotdogs in Iceland” 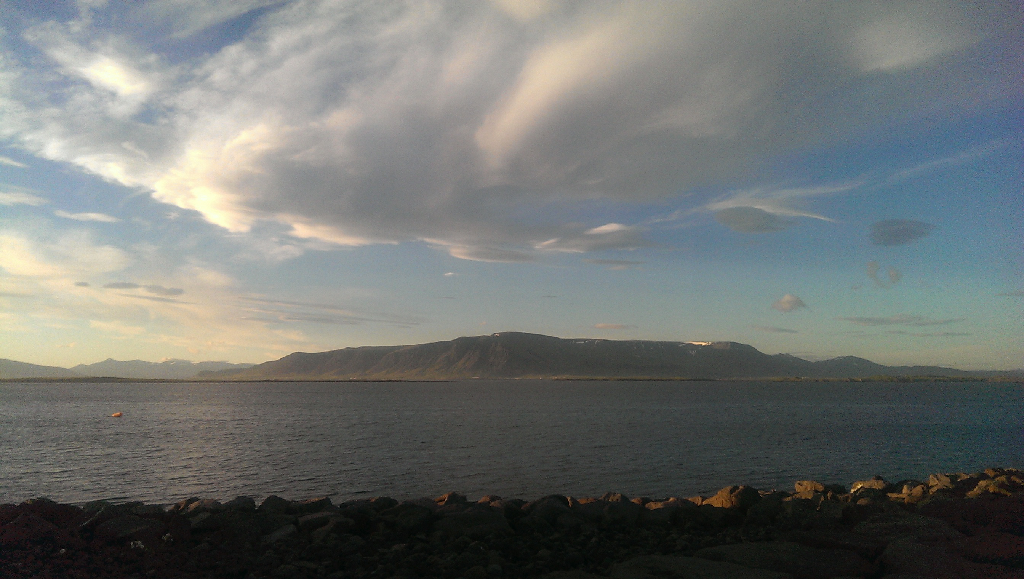 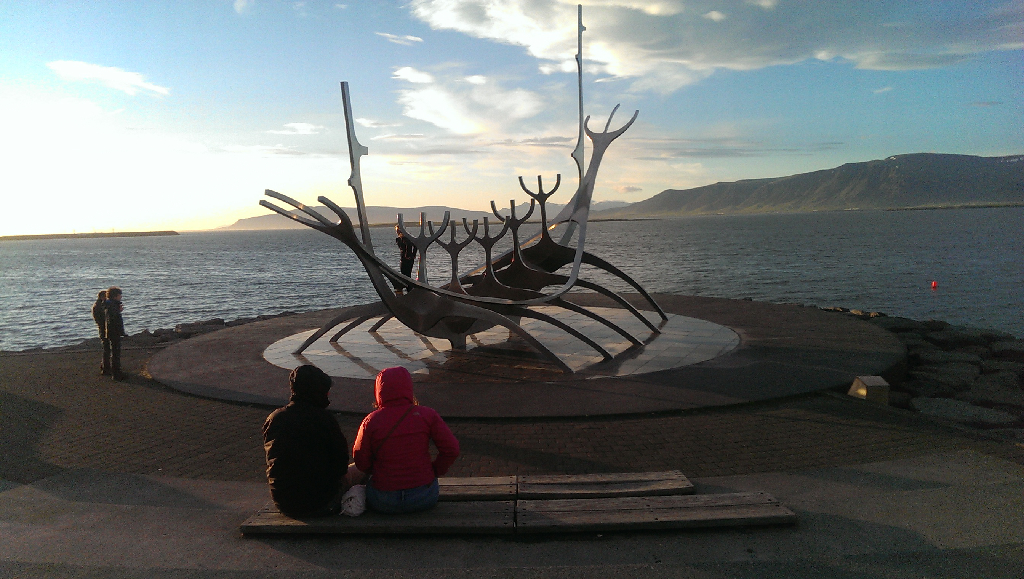 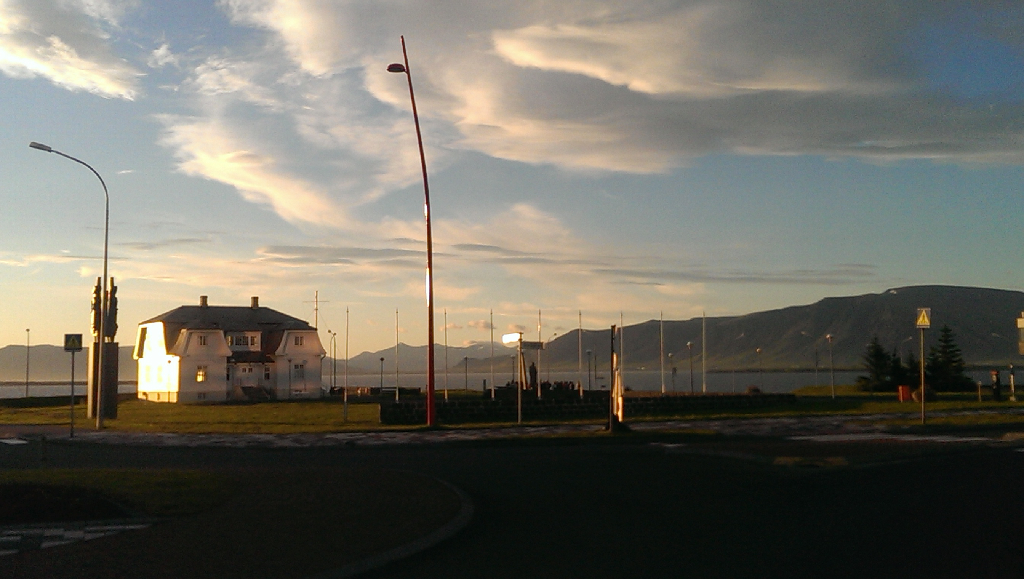 On the way back we stopped at a supermarket to get some groceries and after paying the guy on the till asked us out of nowhere “By the way, did you know that in Iceland we have everyone’s salaries published in a small booklet? I am just looking for mine now”. And he showed us the little book: 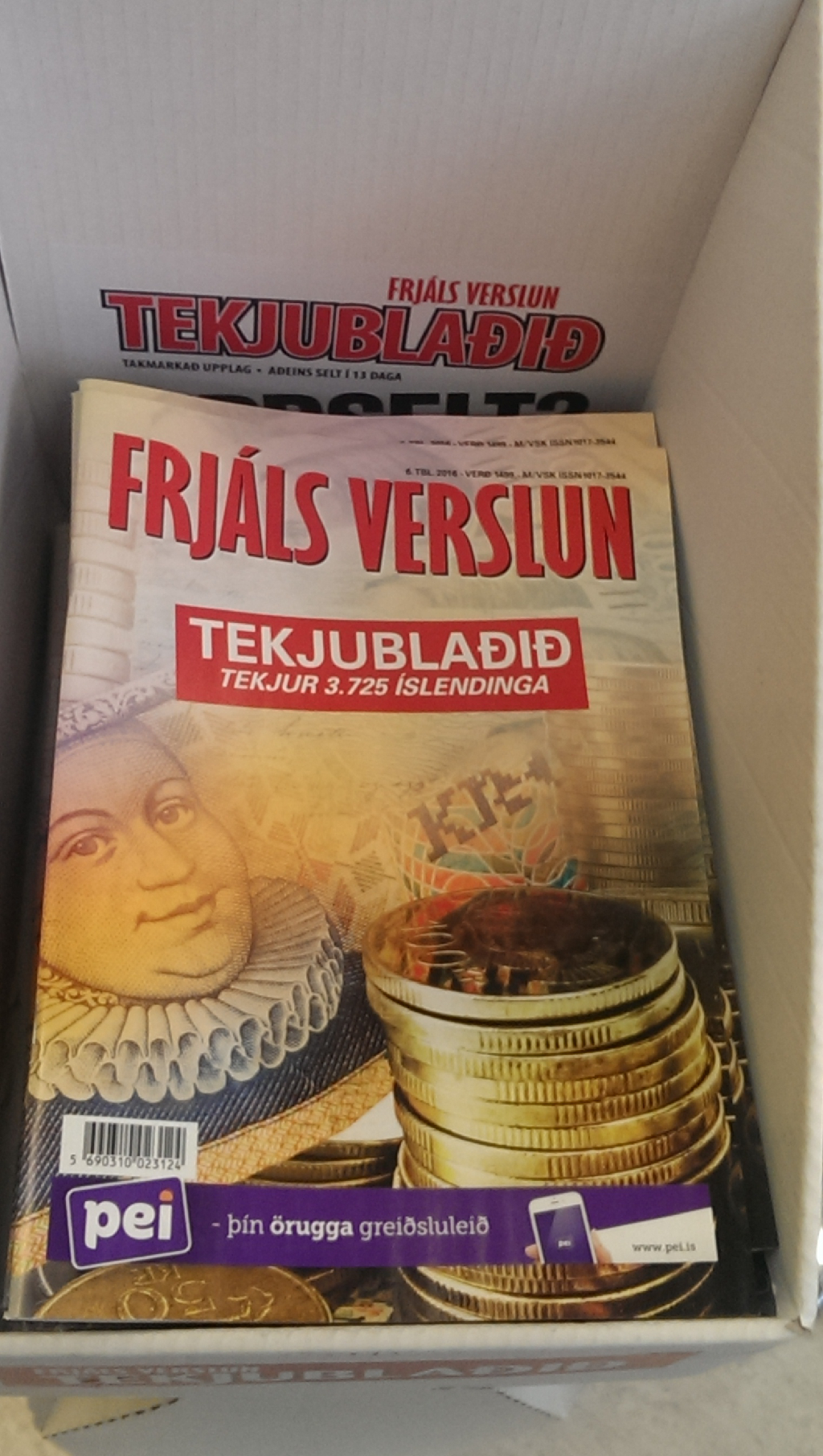 I don’t know Icelandic, but seemed legit with a lot of people’s names page after page and salary-like sums of money on the other side against them.

We finished the walk to the campsite and a beautiful sunset sent me to bed thinking about the days ahead. 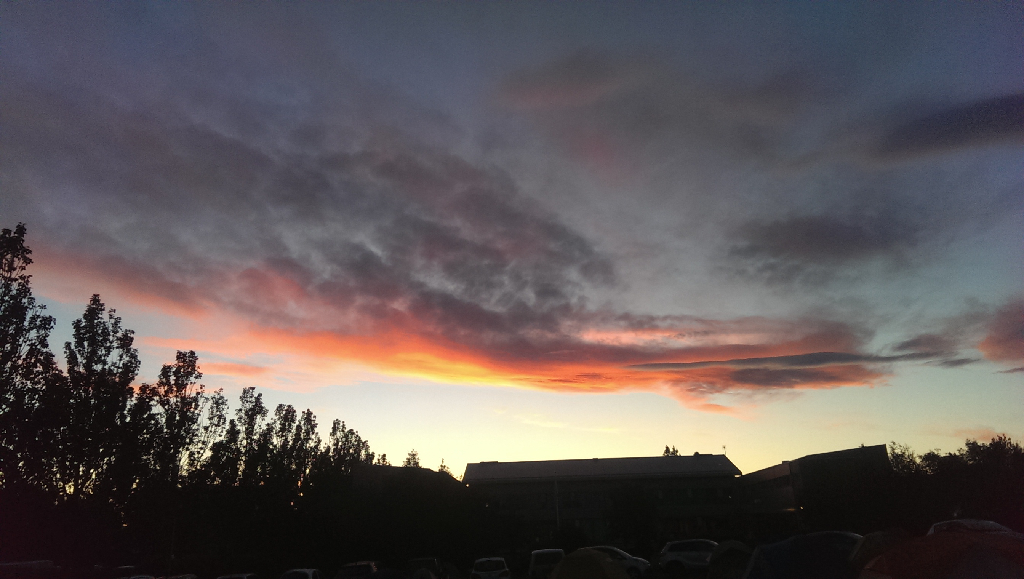 5 thoughts on “Cycling around Iceland – Part 1”