For me this is the day where I gained a friend on the road and it was all decided by a simple gesture.

It was a breezy morning and after a really good rest I was eager to get on the road and head into one of the most isolated sections of the trip – the North East corner of Iceland, known for it’s “black desert” composed of volcanic ashes.

The kitchen was much quieter compared to the night before and I found a table where we could prepare some breakfast with Elad. 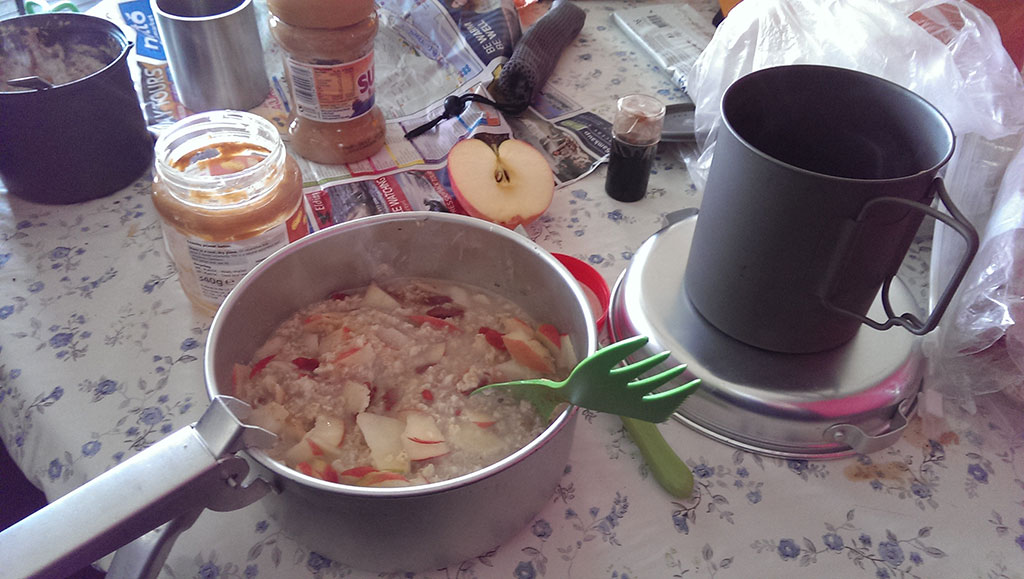 Breakfast is a very important time. It lets you set your mind on the goal for the day and get some energy for the start of it. Oats, apple, peanut butter, goji berries, honey and cinnamon with a cup of coffee.

After breakfast a quickly packed everything. Packing is one of my favourite parts when travelling as it is meditative and I can make sure that everything is there and in order. I’ve noticed however that Elad really hates packing and hadn’t found his rhythm doing yet. He would always take more time and fiddle to get things in the right places.

Normally, our unspoken agreement was that we spend the time we can together when possible, but during the day we would go our own way (not that there are many options), with our own pace. However, that morning I decided to wait for him. Even though I was ready about half an hour before him, I stayed around and chatted to him waiting for him to get ready. This was a crucial moment as from that moment on we became travelling partners. We cycled the rest of the day together, waiting each other out and going through the challenges in unison. 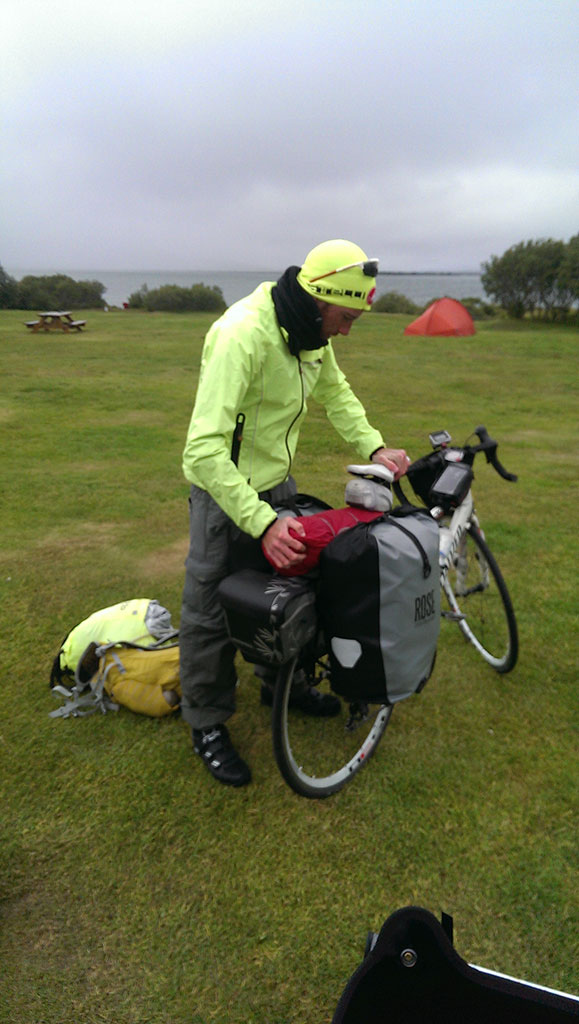 Elad packing in the morning

We left the little town near the lake Myvatn and headed East. Taking it easy to warm up, soon the vapours from the thermal springs appeared in the distance and the air had a hint of sulfur. 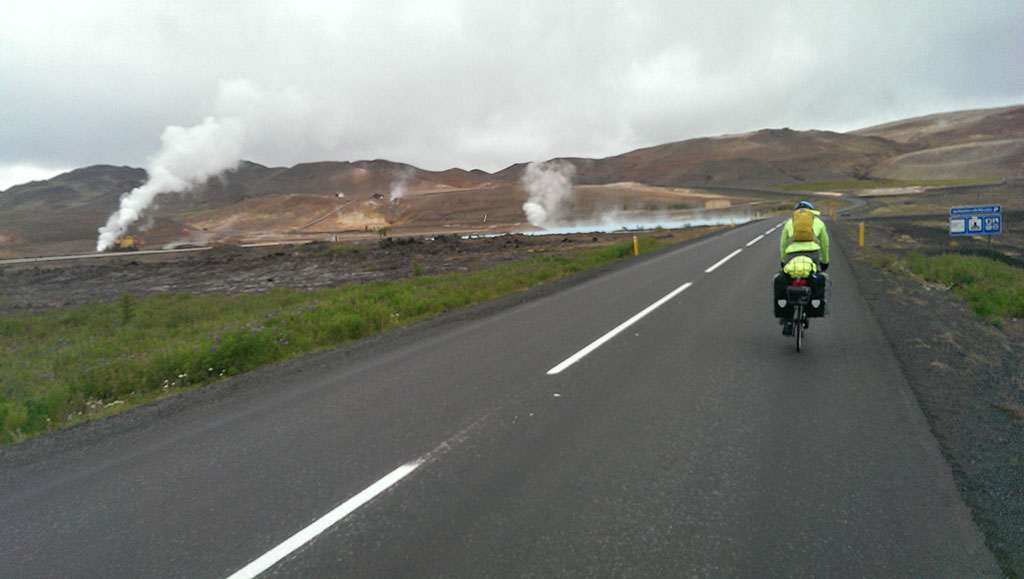 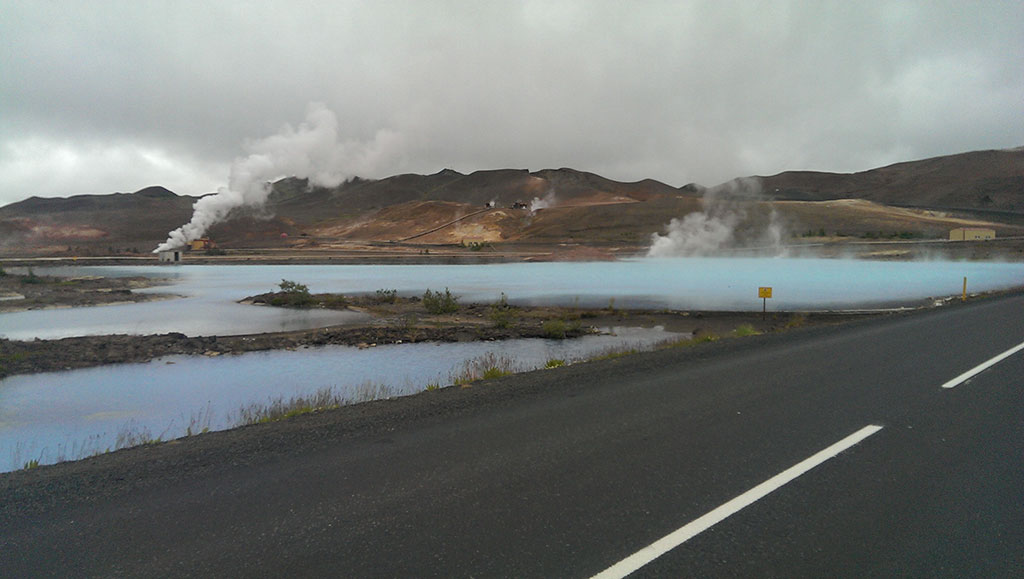 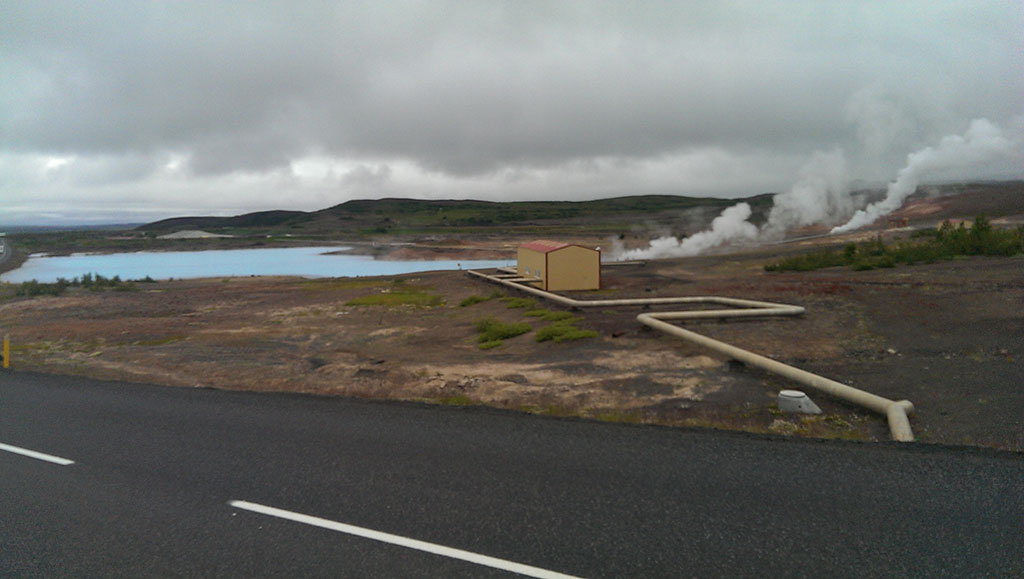 We gazed around at the view. The water was a deep light-blue colour, slightly milky. There were industrial pipes and infrastructure which probably means they were using the heat of the springs. Without realising we found ourselves on a hill climb and a steep one it was! 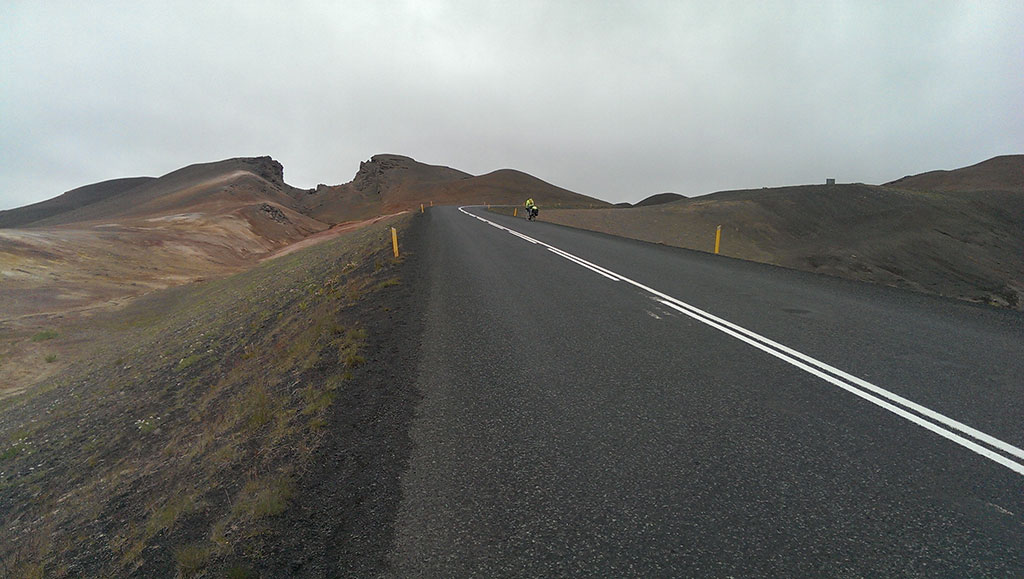 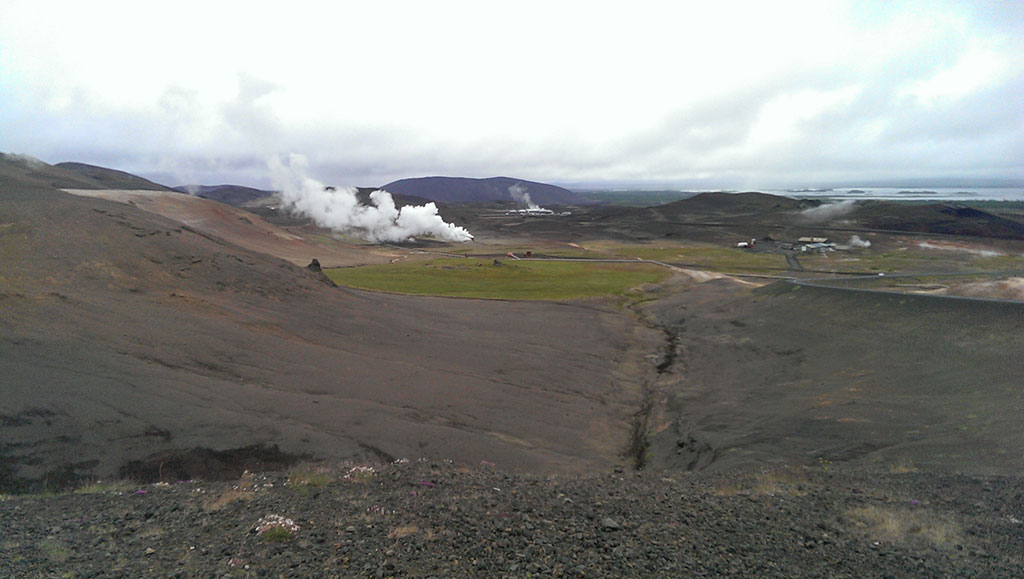 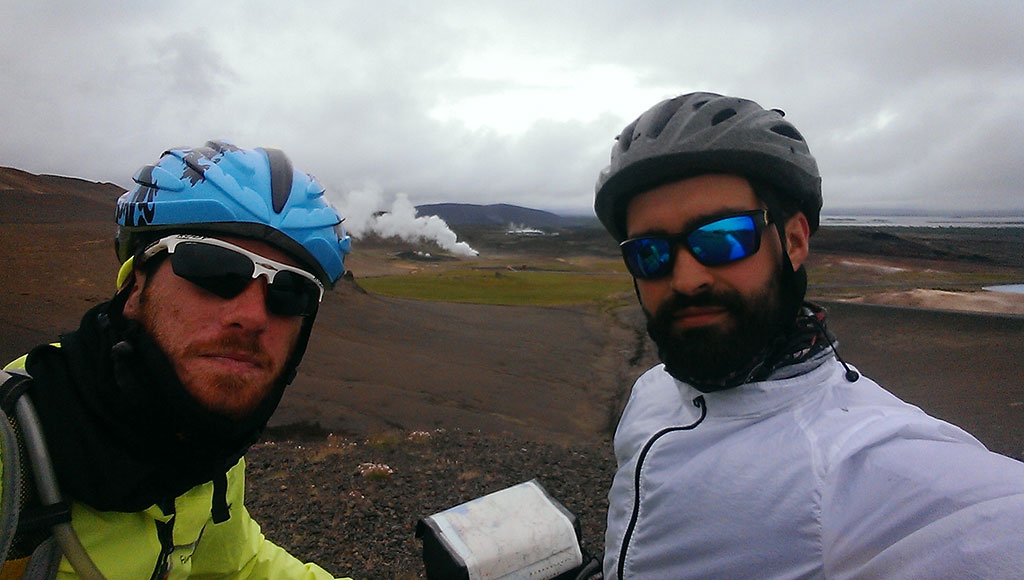 From the top we went down a very steep drop with a few switchbacks into the other side of the ridge. The view revealed the dark plains we were to be crossing in the next hours. But first, immediately after the downhill there was another area, full of tourists with more hot-springs that you could walk around. 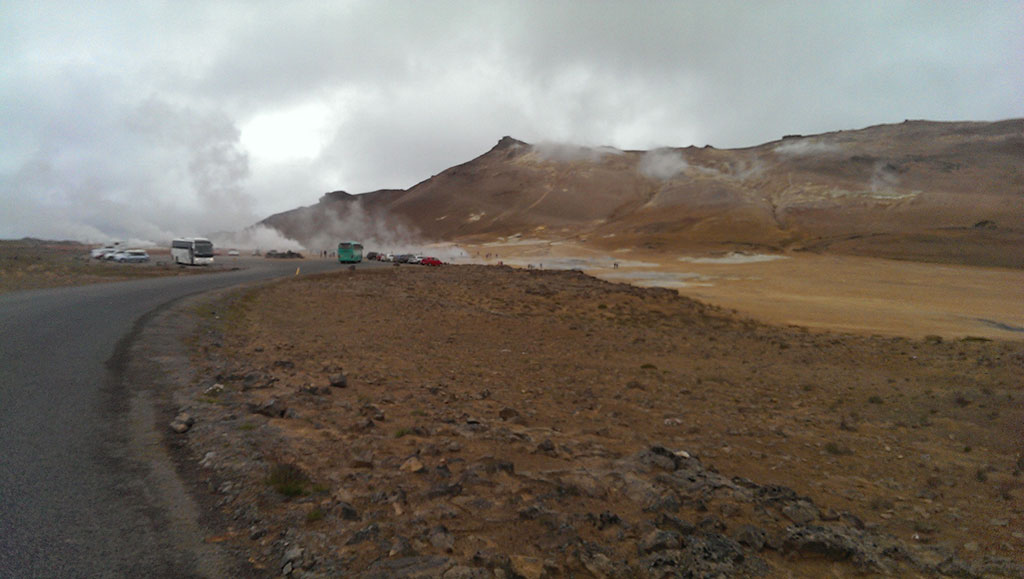 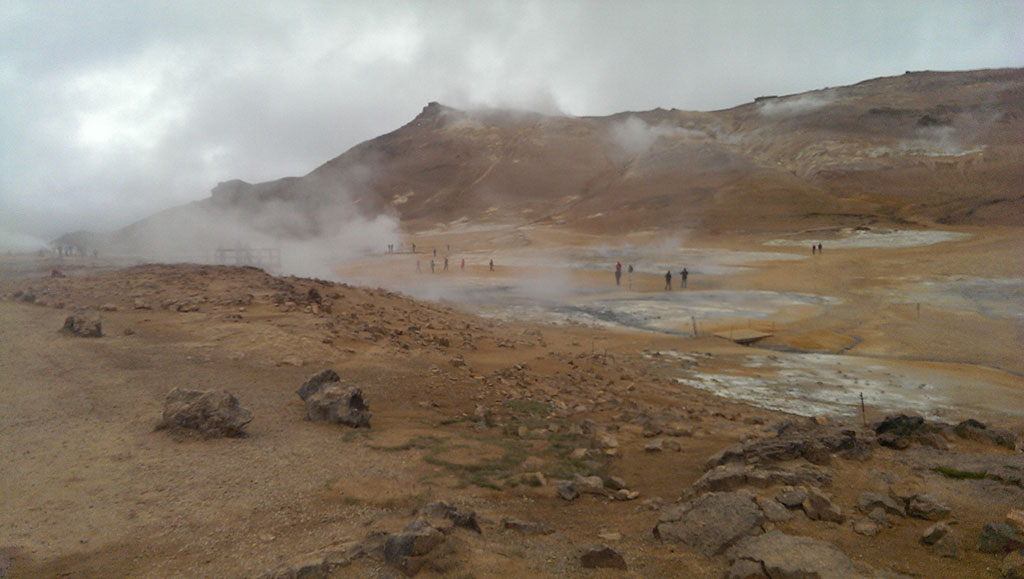 However, the smell was heavy. The air was thick with sulfur (rotten eggs) and we didn’t find much eagerness to linger. The view was beautiful though and the colours cannot be served any justice with these pictures. They were vibrant orange, transitioning slowly into the milky light-blue of the water with mineral deposits around, walking in the steam from the springs. If it wasn’t for the smell it would have been magical. So we left. 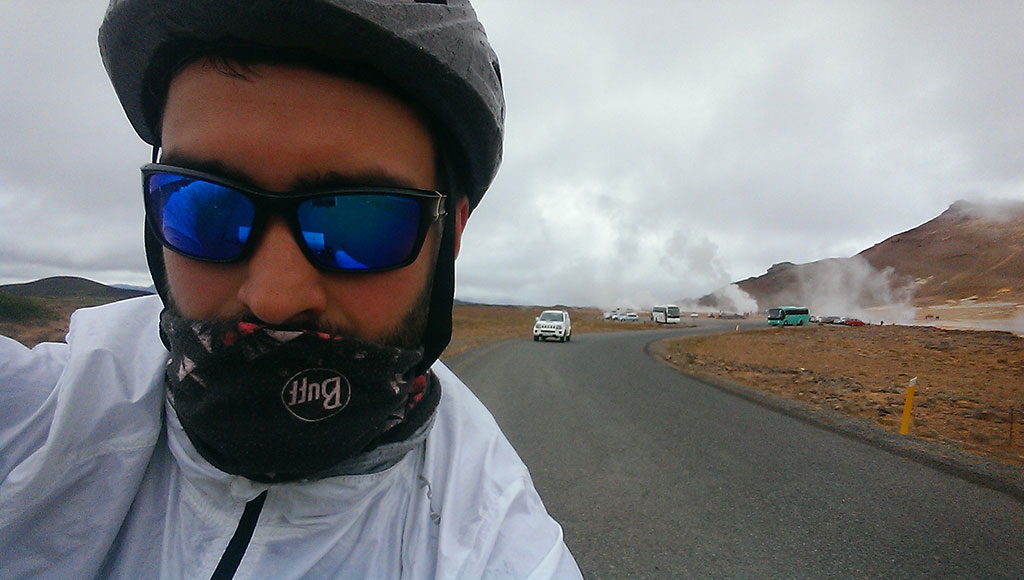 Face covered from the smell 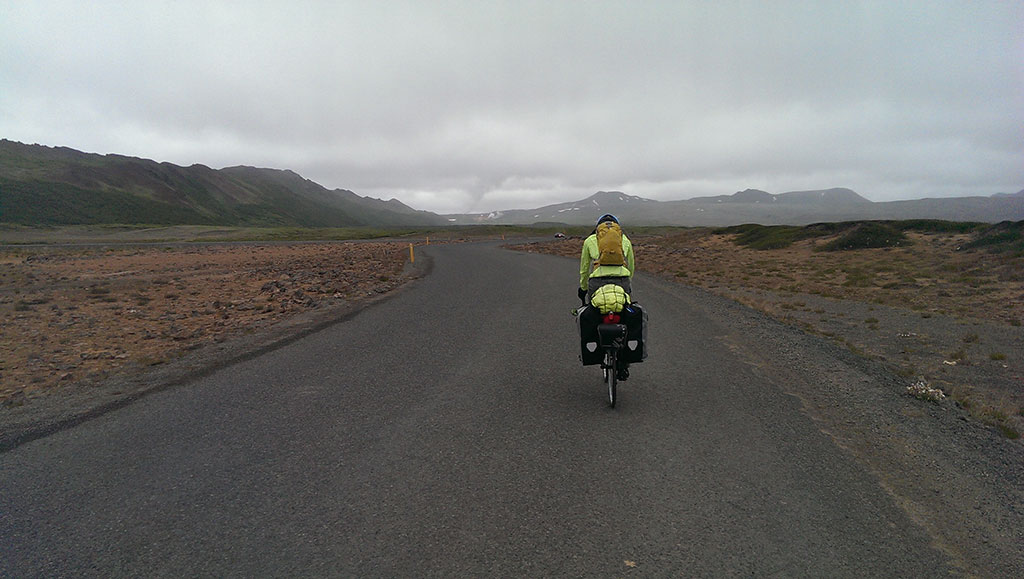 Getting back to the main road #1

Soon after leaving the brimming-with-tourists springs we found ourselves in the black desert.

Words are failing me to describe the sensation of cycling in that environment. It was completely barren, as if you found yourself on another planet. Black fine sand and small cobbles, sharp and gritty as far as your eyes could see. Small hardy patches of thick grass scattered throughout. In the distance, abruptly rising you could see formations of rock, with shapes that stimulate your imagination and for the lack of perspective for distance and scale, you could imagine giants, laying in deep sleep; or lizards sitting in wait. The skies were dark, low and almost making you feel claustrophobic. The whole landscape made you feel insignificant and small. The bashing of the cold wind, which in gusts could slap you and get you off your balance, aided that impression even more.

I imagined myself driving through the landscape in a cosy car, hidden from the elements and the experience was immediately transformed, as if I was looking at a beautiful exotic beast behind a glass. Instead, I was in there, with this beautiful and untamed element, having the benefit of complete humility and the deep realisation where I stand. 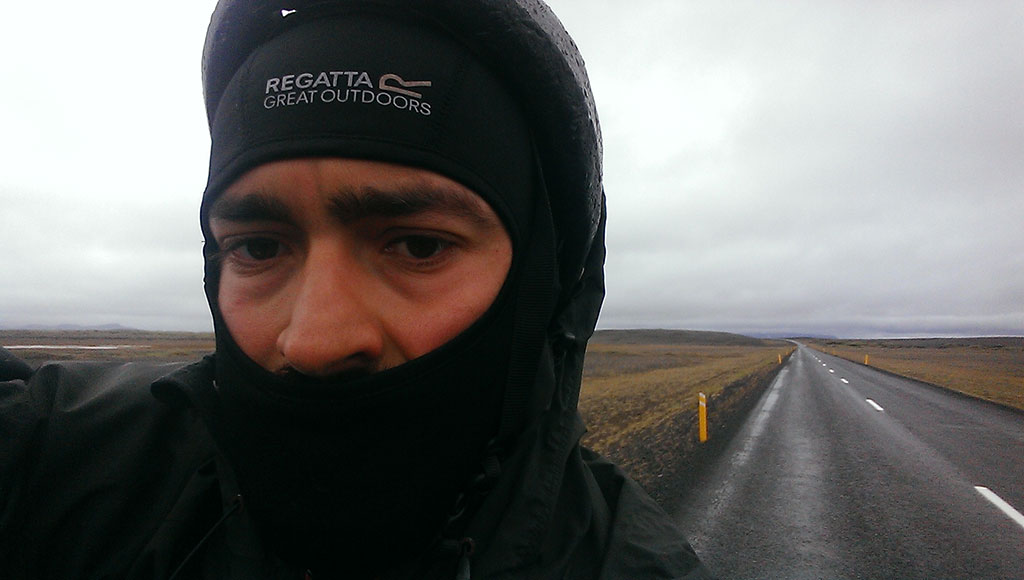 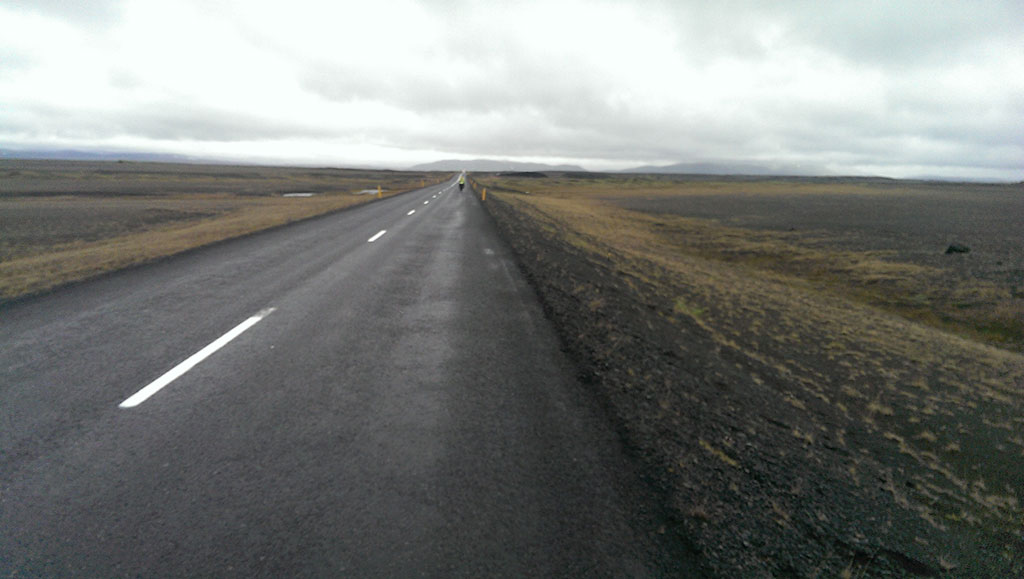 The endless road into the distance

It was hard going, the wind was against us. I slowed my pace. I loved it! It was all that I wanted and all that I hated, intertwined into what I was here for – adventure!

A few cars passed us and just ahead they turned left on the 862 road at the only junction for tens of kilometres. That was the way to Dettifoss, the most powerful waterfall in Europe, one of the truly incredible sights we have on Earth, but we weren’t going that way. There was not enough time to visit everything and in order to make it back in time, we couldn’t afford what would have been a day of detour, so instead we headed straight on the #1 road. 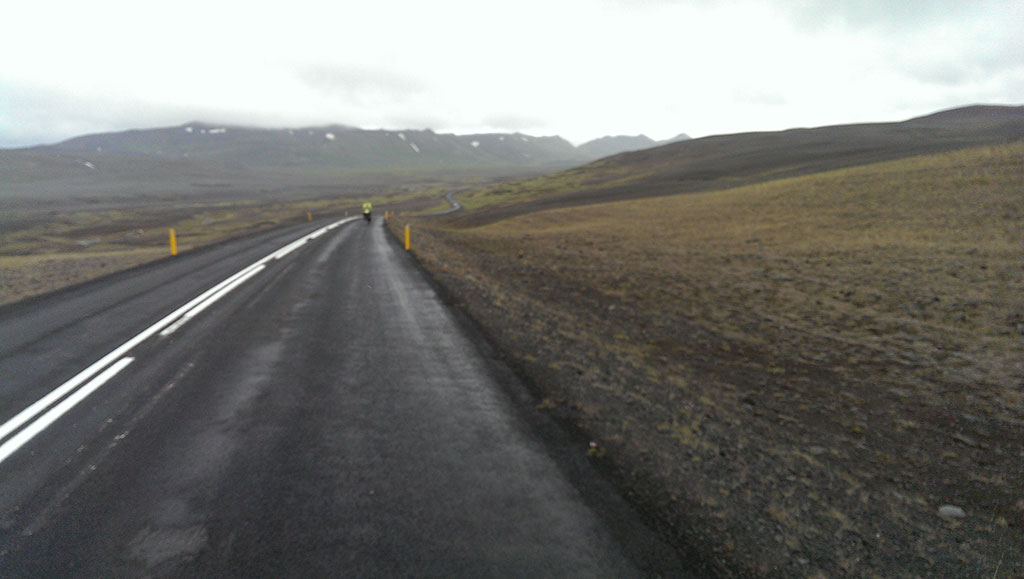 We passed an elderly couple that had parked on the side of the road their mobile home. They waved at us and we stopped to say hi. They asked us where we’re going and they told us, they were planning to stay near Dettifoss. They were from England and were planning a long summer vacation in Iceland, similarly in awe of the sights.

We moved on and came out of the flat desert, approaching toward the mountains. Elad was pushing hard, and I was trying to focus on my rhythm. “One, two, one…, two…”. I was getting tired and the relentless wind wasn’t helping my mental state. 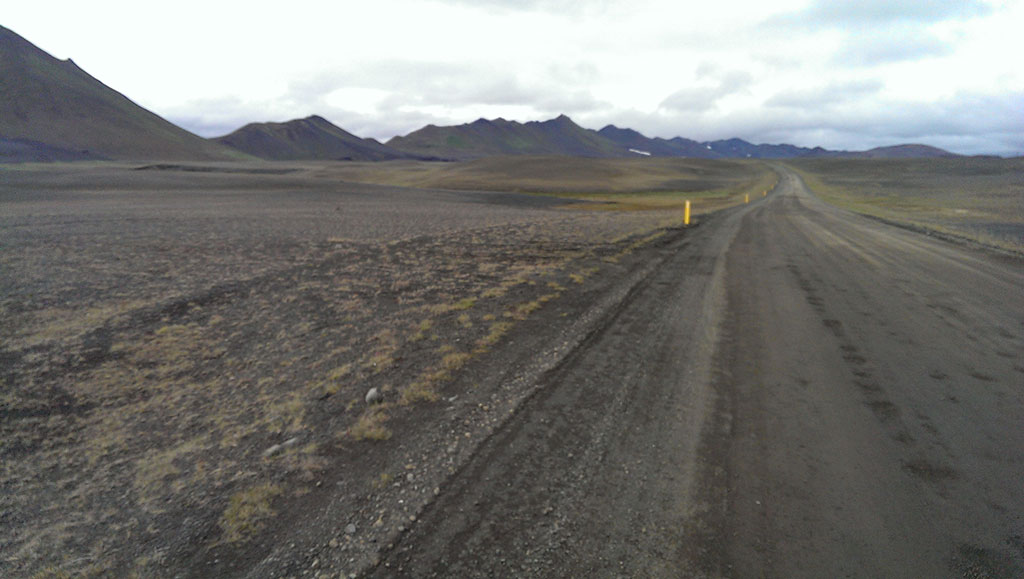 Luckily we were getting closer. We were near the junction that would take us off the #1 road onto a dirt road called Möðrudalsleið that would take us to Modrudalur and the campgrounds there. It was the only place I could find on the map that had some people for hundreds of kilometres around.

In retrospect, I would have probably camped somewhere wild, but that was my first trip and having a specific goal for the end of the day really pushed me through the hard times. Believing that you know where you’re going is much more empowering than not. I guess, this is the path of grow in any adventurer, removing one by one the small comforts and “civilized crutches” that we are used to. 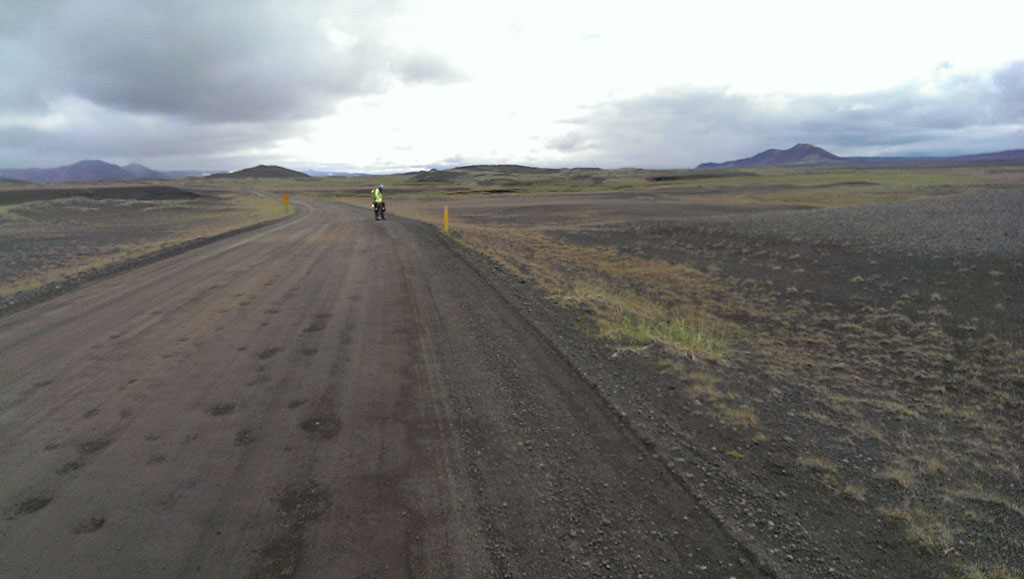 The road got really bump as soon as we were off the #1. Potholes, no tarmac, there was no way you could look around (so we stopped). Elad was struggling on his thin-tired road bike. The next few kilometres would require a lot of concentration. That’s when we heard a rumbling sound behind us. It was a massive bus, flying as if it was the highway. We moved out of the way and it passed us, making a cloud of dust behind it.

Soon we found ourselves at Modrudalur. It was a few small buildings, more like bungalows, a bigger restaurant/bar and a beautiful, traditional Icelandic designed church building on a small mound.

The bus had unloaded a “wild pack” of Asian tourists, who were “feeding” on the “views”, capturing as it seemed, every spec, every rock, every detail. It felt like even the wind couldn’t silence the shutters.

We went into to the bar, paid for the campsite and went another 400-ish eters ahead on the dirt road to an area that was simply fenced, with a small shed and a sink in front of it. We scouted and look for flat ground near a bench and a table. 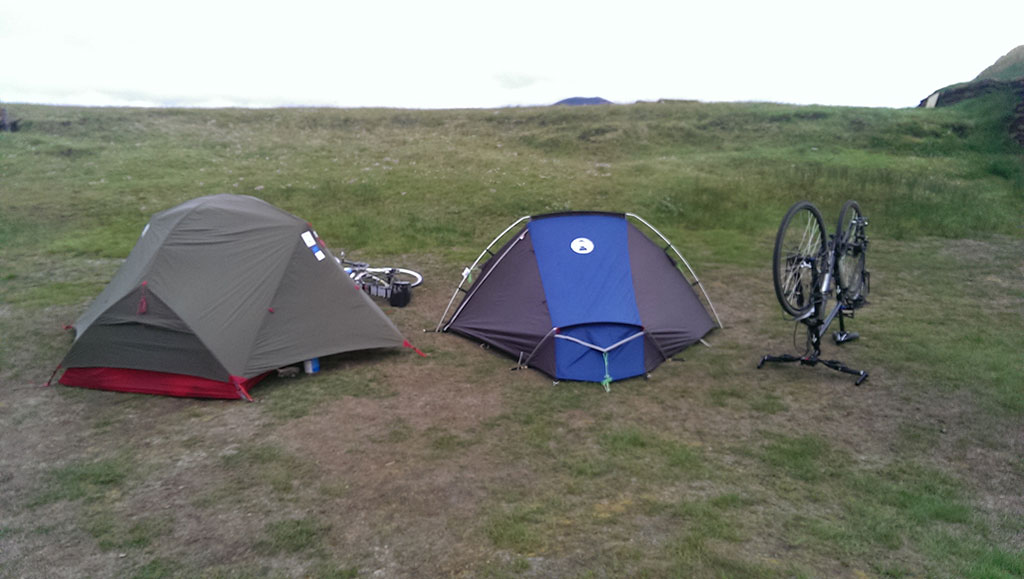 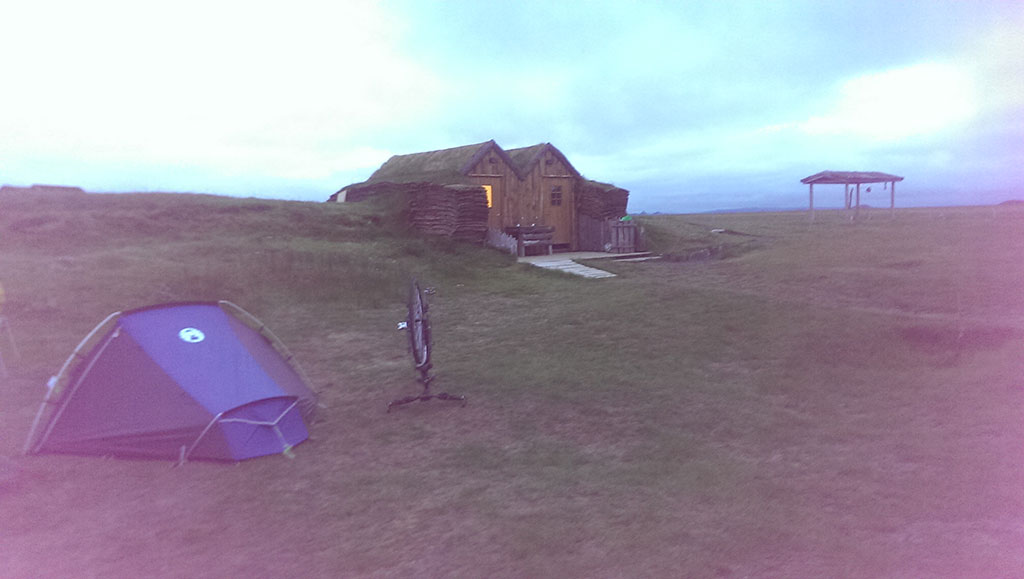 We unpacked, put the tents up and set the stove to make some of the usual pasta and noodle soup combination. 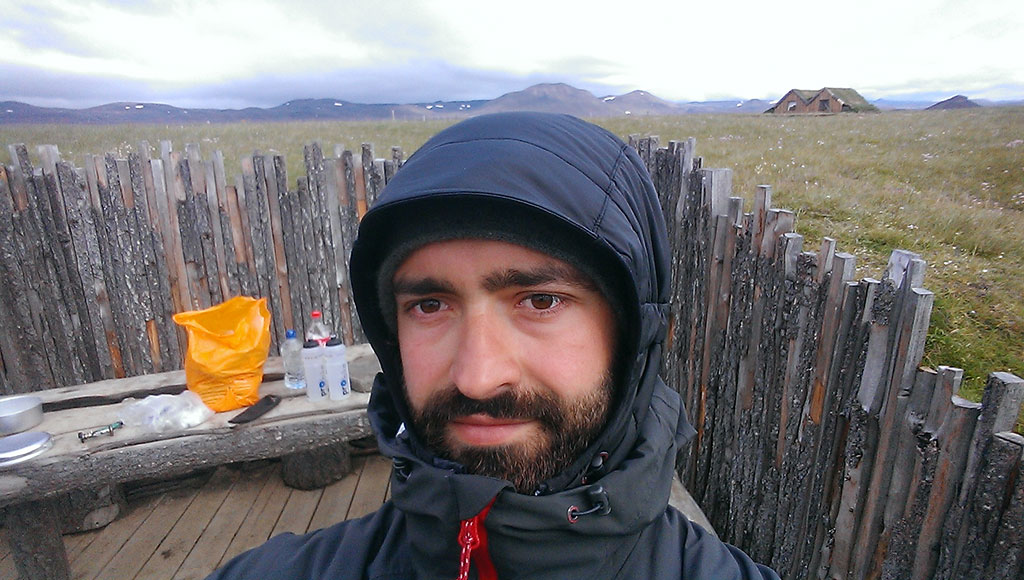 I decided that post supper a shower would be a great thing to have. Something to warm me up even more and get all the sweat out. I went back to the bar, paid about 150 kronas and they gave me the directions to the shower. It was a small shed, right in front of the bar that had toilets on one side and a door on the other. I opened the door and it was a tiny little space, with just enough room for me to stand in there without turning around, with an improvised shower head attached to the wall. I had to leave my clothes outside the door, so I stripped naked right when the bus with Asian tourists was calling them back in. A whole mob passed right near the shed where I was undressing. Imagine that huge group of tourists behind me, the shed on my right, and the endless, grassless black sand with mountains in the distance in front of me. You can’t make this up! I left the clothes and went inside the shower “room”. Turned on the water and “aaaaah”, screamed like a little girl who’s evil brother had pinched her and she needed to let her parents know that she’s almost dying. The water was as cold as it gets…

I got out and saw a smaller door next to my door. Apparently the gas boiler wasn’t on, so I turned it on, went back in and tried again. The water was still cold, but after half a minute it started warming up (only just slightly). At this point I had been in the open air, with cold wind, completely naked (covered with a towel) for about 15 minutes. I was freezing! The warmth of the shower was no where near enough to warm me back up. I finished at least cleaning myself and go the dry clothes from outside (the only pair I had). Put them quickly on and ran back to the tent. Elad was inside his, reading blissfully. I told him “Lets go get a beer from the bar”, secretly just wanting to stay inside and warm up a bit. He didn’t need to hear anything else, he was out his tent and ready to go in an instant!

Inside the bar/restaurant the atmosphere was similar to what you see in movies inside log cabins. Everything was made of wood, the lights were dimmed and most tables were occupied by people. The air was warm and I unzipped my jacket, shivering a little bit from the temperature difference between my skin and the air.

We got ourselves some drinks and sat on a couch in the corner with a small table in front. Two other guys joined in on the couch opposite us and we started chatting.

They were from Canada and were also cycling around the island. The one on the right (below) had just retired and they wanted to have an adventure together, starting in Rekjavic, but going around anti-clockwise. Moreover, they told us they were planning to do a few hikes and were also taking some dirt roads, away from the #1 road. Those were some hard-core men, taking all the difficulties with a smile.

We had some more beers and chatted for a few hours. 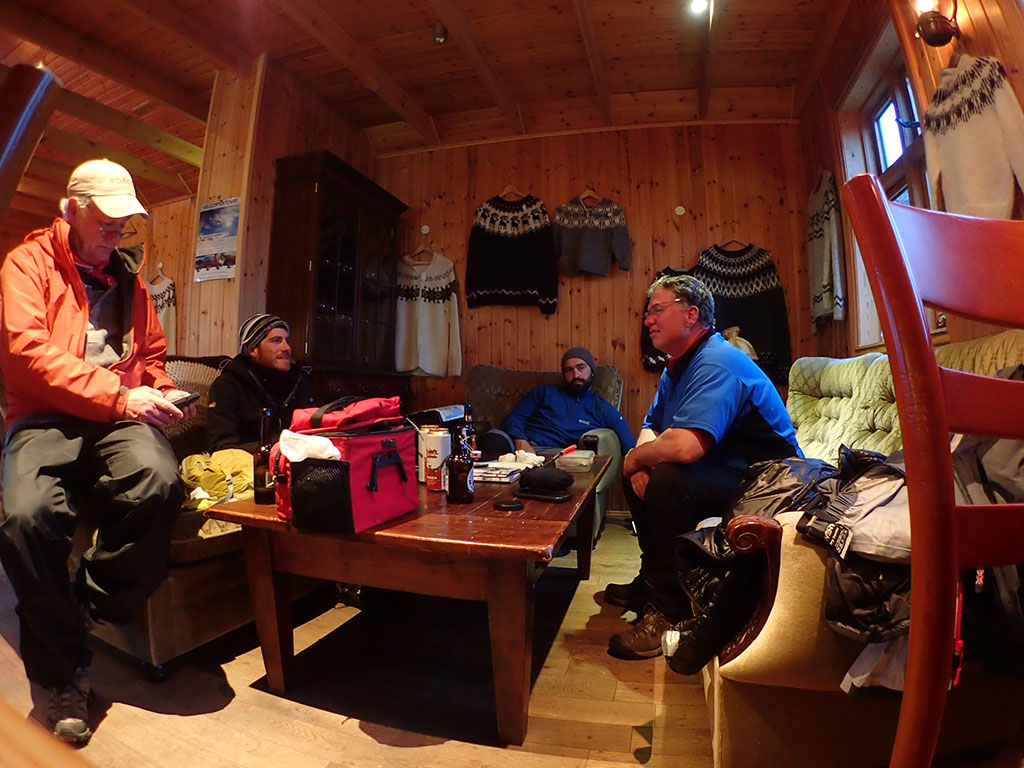 I was getting drowsy from the combination of the temperature in the room and the beer. We said good night and headed back into the tent.

What a day, I was tired, my face was burning from the cold and the warmth, but I was excited for the days ahead!