The sun was shining and I was warm in the sleeping bag. The body was aching and I turned sides a few times, convincing myself it’s time to get moving. 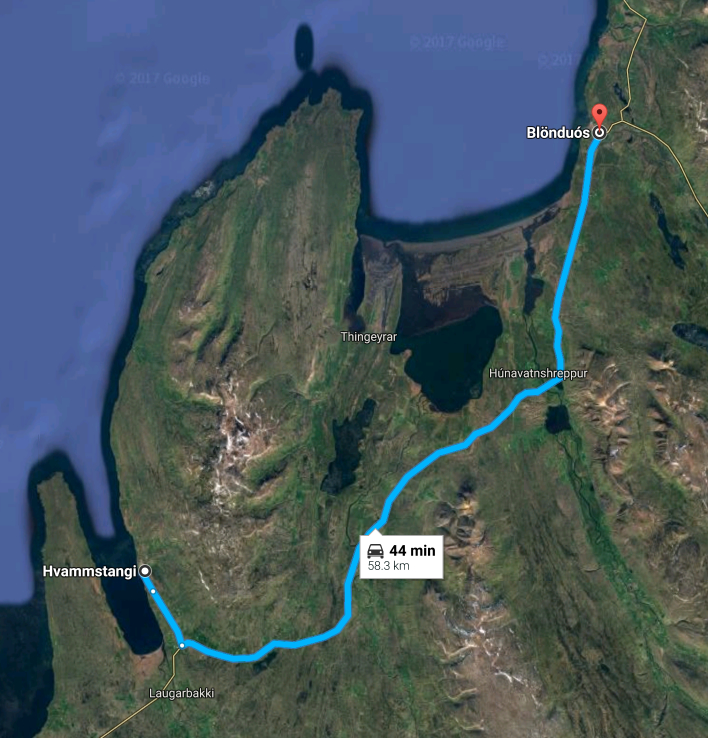 After washing, the tent was packed into the pannier bags. It took very long to put everything in the right places. Bags within bags, they all looked the same, and once I packed the gear it was difficult to find the things necessary in a specific moment. The panniers seemed like black boxes and it was always in the last one that I would find what I needed.

With the bag of food and utensils I moved into the common room / kitchen. It was quieter, with less people then when I arrived the evening before. Oats, honey, apple and some chocolate biscuits with a black coffee – what more could you want to start the day.

I lingered, reluctant to leave the comfort of this place. The routine meant making home every day but then as soon as you’re settled to take it down and move on, looking for another place to call home for the night.

While slowly enjoying the food I started chatting with a few people. The Swiss woman from the day before told me how she lived in Africa for 3 years. She seemed friendly and looking to enjoy her life as she went along without a specific long-term plan. A Canadian couple joined in the conversation from another table. They expressed their admiration for the challenge I had set myself and how they would love to do it. I told them they should and they laughed. Somehow we ended talking about music and I mentioned how passionate Andra is about dancing bachata. Sophie’s eyes (the wife) lit on the spot. She had been dancing bachata for a while and loved the music.

It was time for me to move on, so I washed my dishes, collected the charged devices and went out to pack the bike. As I was packing, in the distance I noticed a cyclist following the winding road into the campsite. Did he cycle all night? Where is he coming from to arrive at this time in the morning (it was already around 10am)? I finished packing my bike and approached him as he stopped at the common room. He had a head full of perfectly white hair, face red from the wind but very energetic and smiling. He looked to be at least 50 years old. We started talking and he told me he was from the Czech Republic also doing a circle around the island. He arrived from Bodardalur as well. His bike was a mountain bike with only two back panniers, packed to the top and a big bag in the middle. He told me that his plan was to stay in Hvannstangi and rest for the remainder of the day. I wished him an enjoyable sunny time and left.

My supplies were low and now that I had some more energy I explored the little town and went through the local store to load on food. Finally ready to go (close to noon now) I began my exit from Hvammstangi. 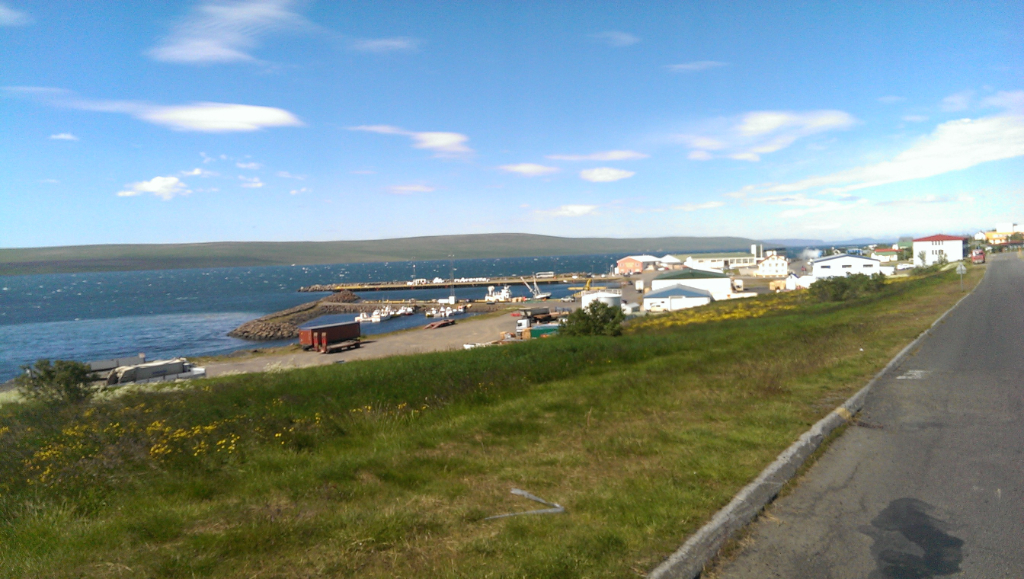 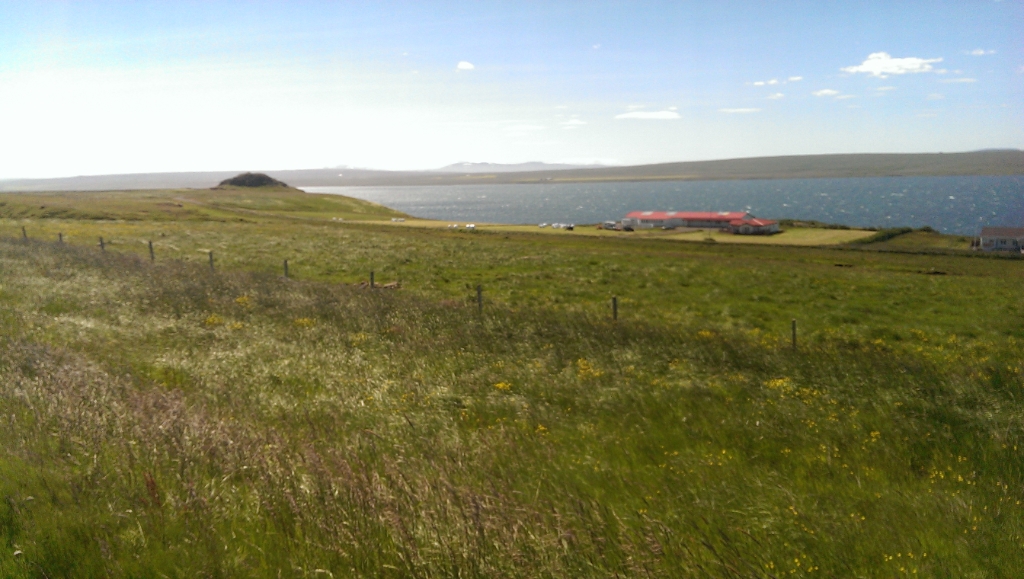 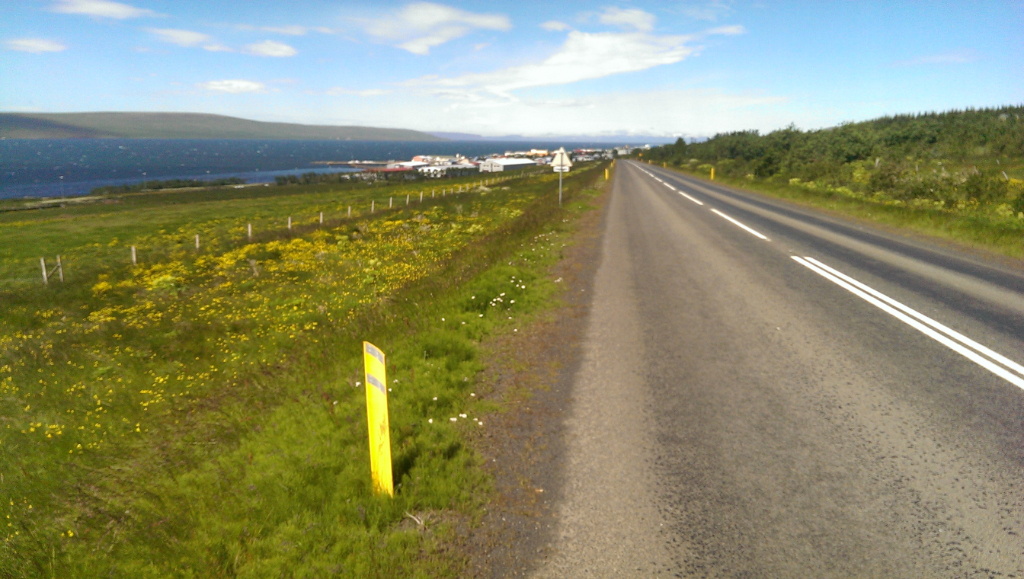 There was tailwind and even with the slight climb I soon passed the first 6km and was back on the main road. Shortly after the turn the tarmac converted to well packed fine gravel and not long after to larger gravel that made progress slower. There were huge asphalt pavers on one side preparing the surface for what would soon be tarmac. That caused a mini traffic jam (if you could have such a thing in Iceland). I zoomed passed the cars, overtook the machines and went on until the road switched back to asphalt. 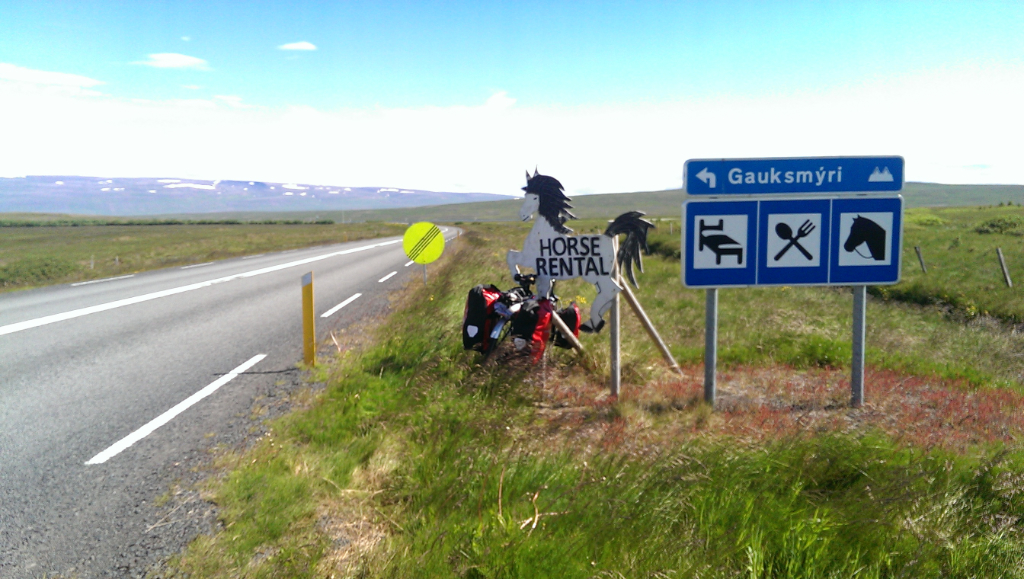 Now that the hill was behind me the view opened ahead and I could see the mountains on the left and the right, in the distance. As it always is with cycling the downhill was enjoyable. I looked around, noticing the sun warming me up, the endless fields of grass like an ocean around me as far as I could see ending into the steep mountains that came out of a sudden from the fields. 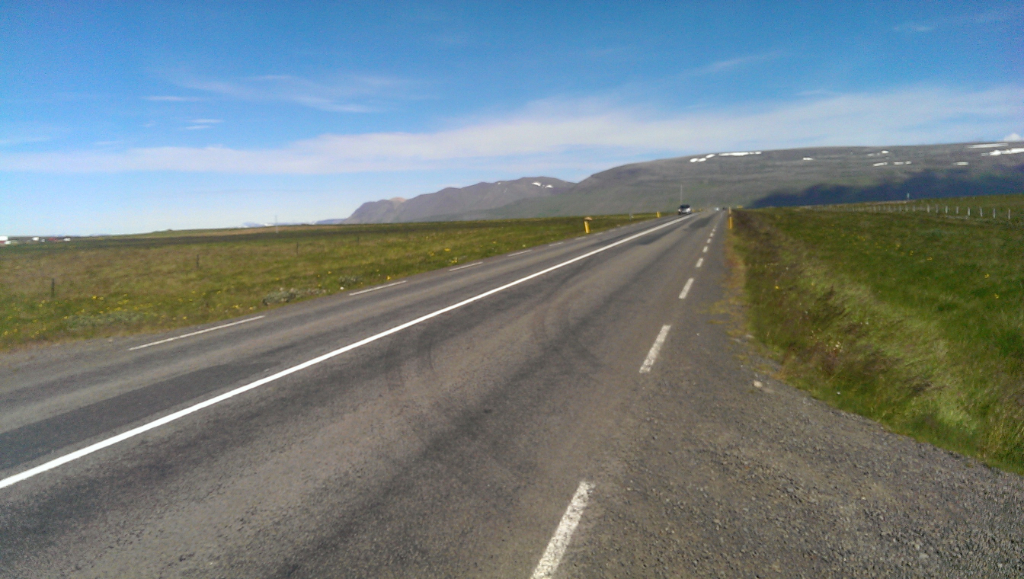 At the base of the hill where gravity was not helping me anymore, the protection of the hill on the left disappeared revealing lake Hóp. The planes exposed me directly to the wind and I felt its force again. Stronger than before, it sinked in – this is what all those forums, articles and posts were talking about. The girl from London who was leaving Iceland at the airport just when I arrived, had told me just once simple thing “The wind!”. Now I knew why.

Day five was planned to be one of the shortest to allow for some rest after the challenging mountains. At 62km it should have taken me a maximum of 4 hours. In fact it took me 8 to arrive at the Blonduos. At times I was cycling with 10km per hour on flat ground. It was exhausting and mainly demoralising. No inertia, every meter had to be pedaled for.

I couldn’t do it anymore, I just stopped when I saw a small junction. 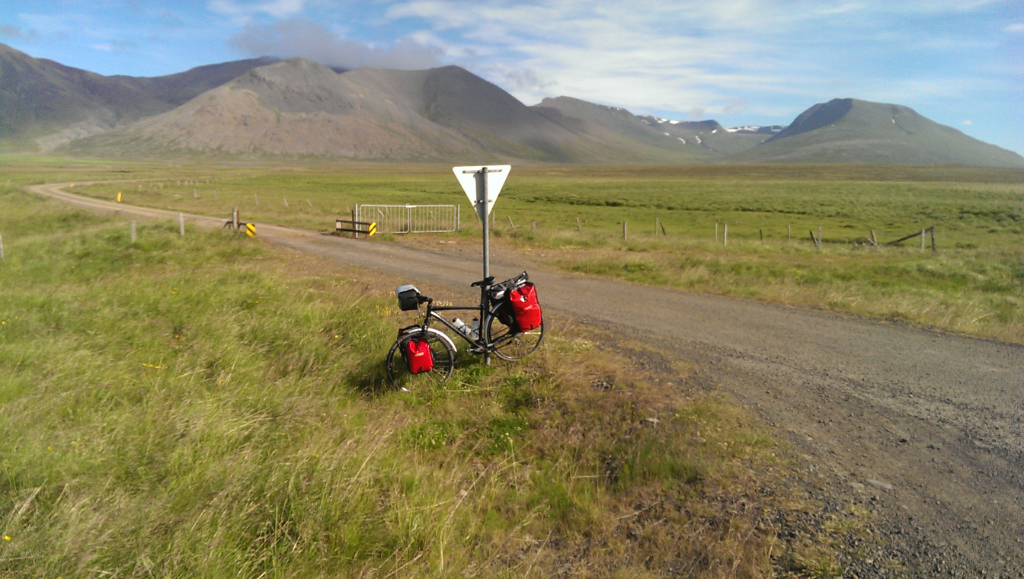 After just a few hours I had no energy, it was time for lunch. As was the ritual by now, I found a low point behind a mound and laid horizontal on the ground to hide from the wind. 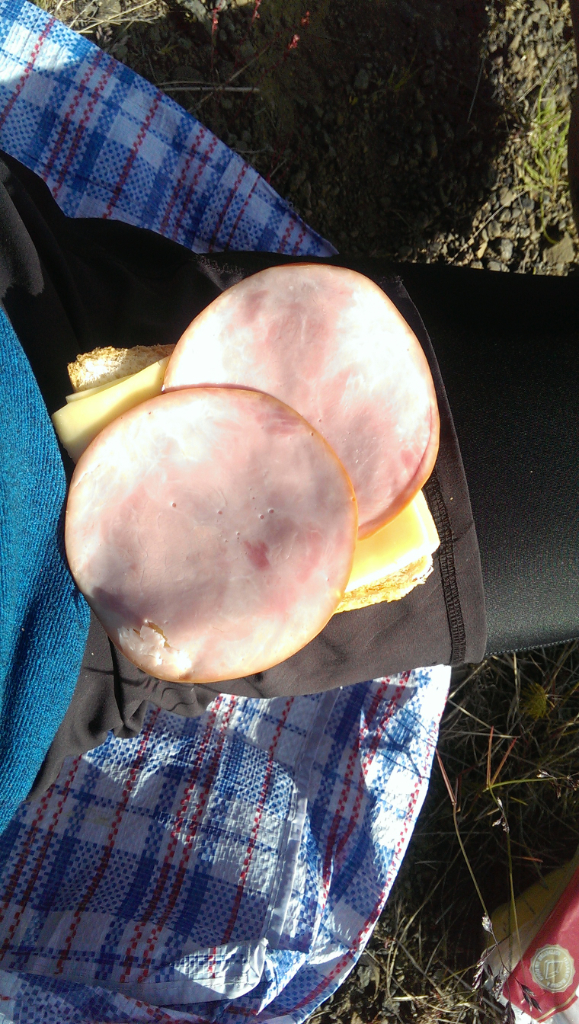 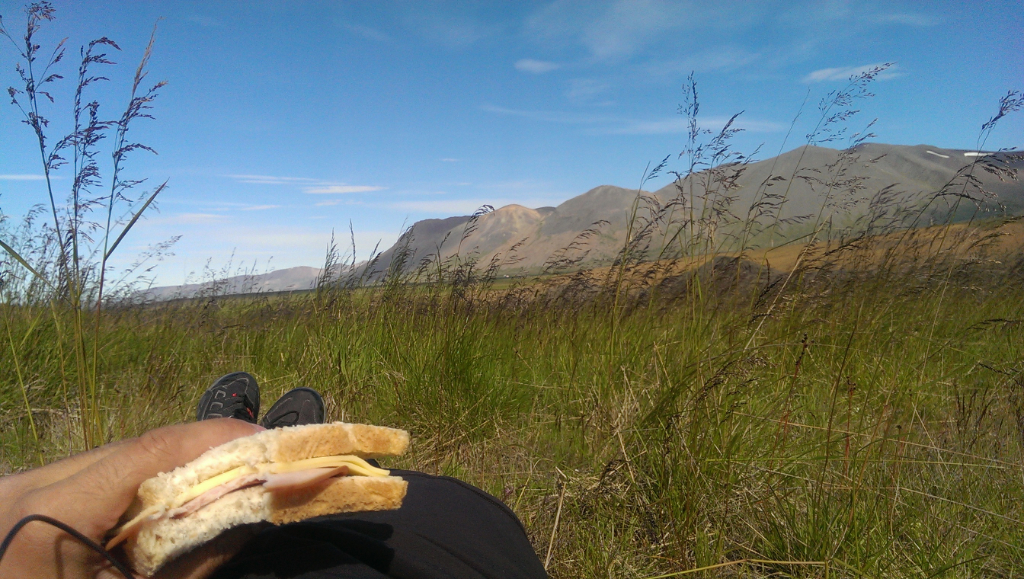 Ham, cheese and bread were a nice diversification from the diet of biscuits.

It was time to go, I was not even half way there and time was passing.

In the distance I saw a silhouette. Soon enough I stopped on the side to have a chat and a break from battling the wind. It was a woman in her forties. Suddenly, I noticed that there was a little kid behind her, sitting, leaning on a huge backpack, apparently hiding from the wind.

Mother and daughter – they were both from Germany. The daughter was 12 years old. Her mom asked her what she wants for her birthday and the little one requested that they spend her summer vacation working on farms in Iceland. So that’s what they did. The family had a history of travelling and the mom told me she and her husband travelled around the world when they were younger, living in Asia, Australia and other places. Now they had two sons who were older, also travelling and it was just their daughter living with them as she was studying.

The two moved to farms and did work in exchange for food and accommodation. In fact, while hitchhiking they managed to secure a job on one of the whale watching boats (as the company owner was the one giving them a ride). They had food, helped to serve the tourists, saw whales for free and had an amazing time. Now the two were moving to a farm where they could help with other duties and hopefully with the help of the farmer look for artic foxes to watch in their natural environment.

How epic I thought, a very smart way of exploring Iceland indeed, cheaper, less painful than my choice and they got a chance to see the local culture, customs and way of living. I bid them good luck and continued my wrestling match with the wind. 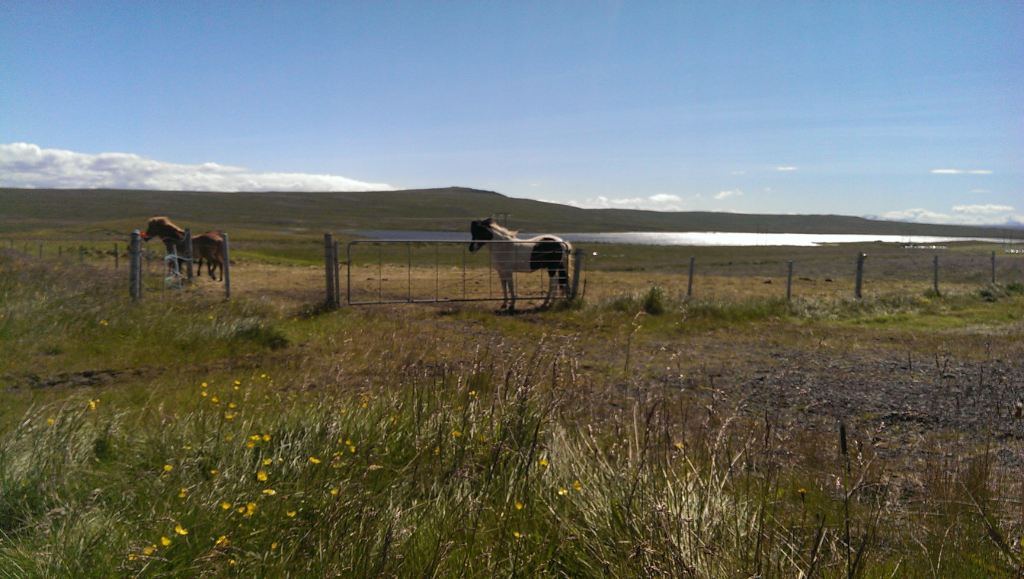 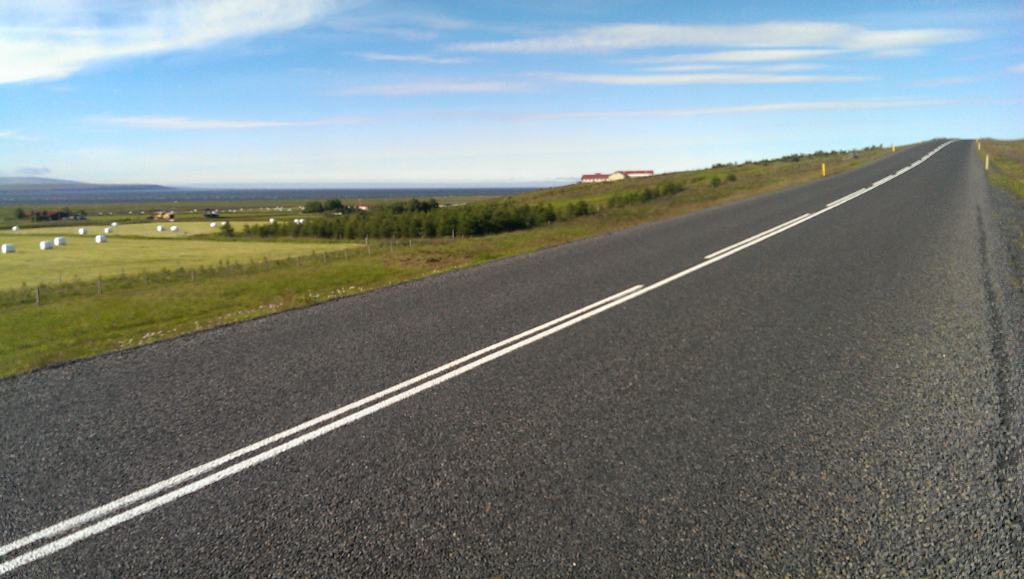 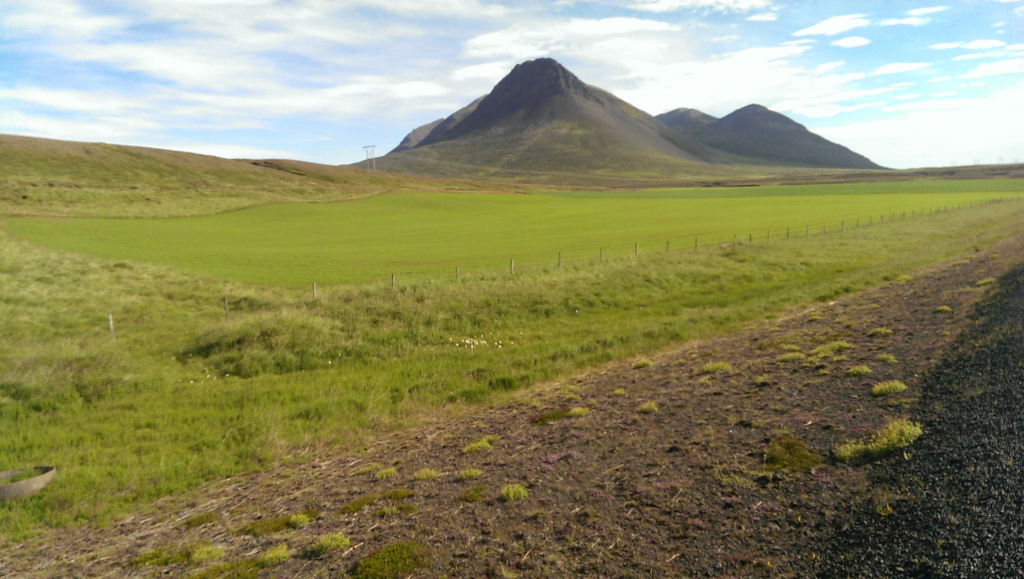 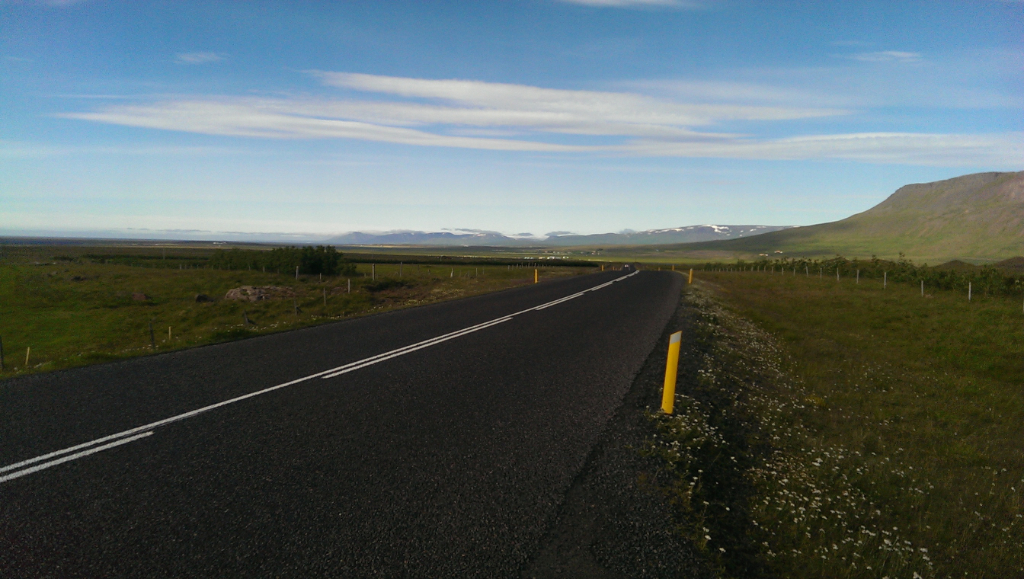 I focused and build up a rhythm. I knew that every stop costs me a lot of time so I set myself some goals for the minimum distance I would pass before I get a bite, before I stop or have a rest.

The views were stunning. The day was beautiful and sunny, only if the wind could relax just for a few hours. I laid back and tried to think of the long run rather than exhaust myself in sprints. The problem was that I had no cycling culture for these kinds of trips, I didn’t know how to pace myself and preserve my energy. 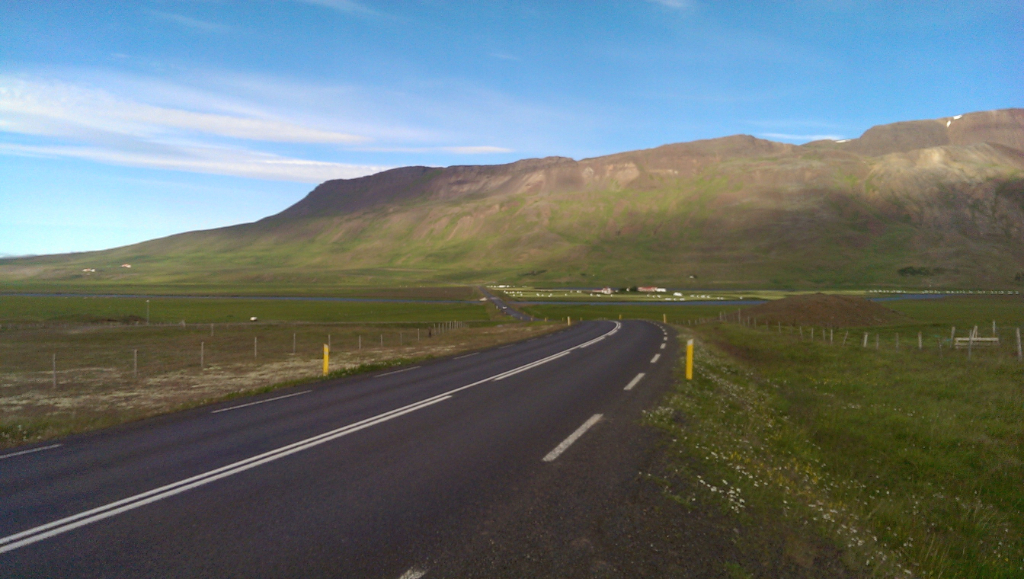 Approaching the junction with road 722

I was coming close to the junction of road #1 and road #722, so according to the map I had about 17 kilometres left. The problem was that if until now the wind was somewhat from the side, now I had to face it directly from the North.

Absolutely gruelling and slow. My perception of time almost halted. The yellow markers on the side of the road seemed hundreds of meters apart. I was mentally exhausted more than anything. 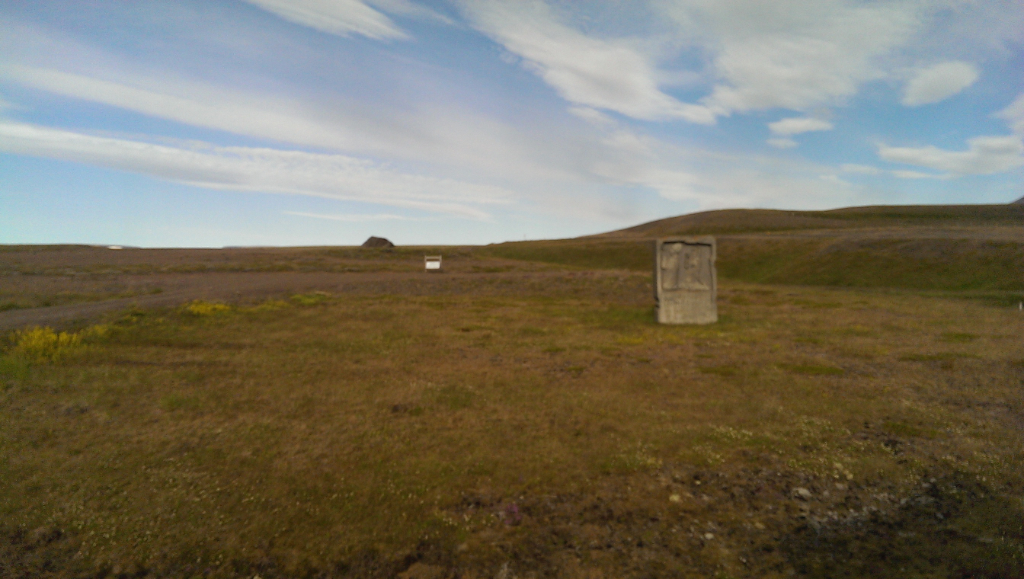 A monument on the side of the road appeared portraying two figures on their knees praying. I didn’t know what it means. At that point I didn’t even care. Normally I would approach and maybe stop, but I didn’t have the energy. 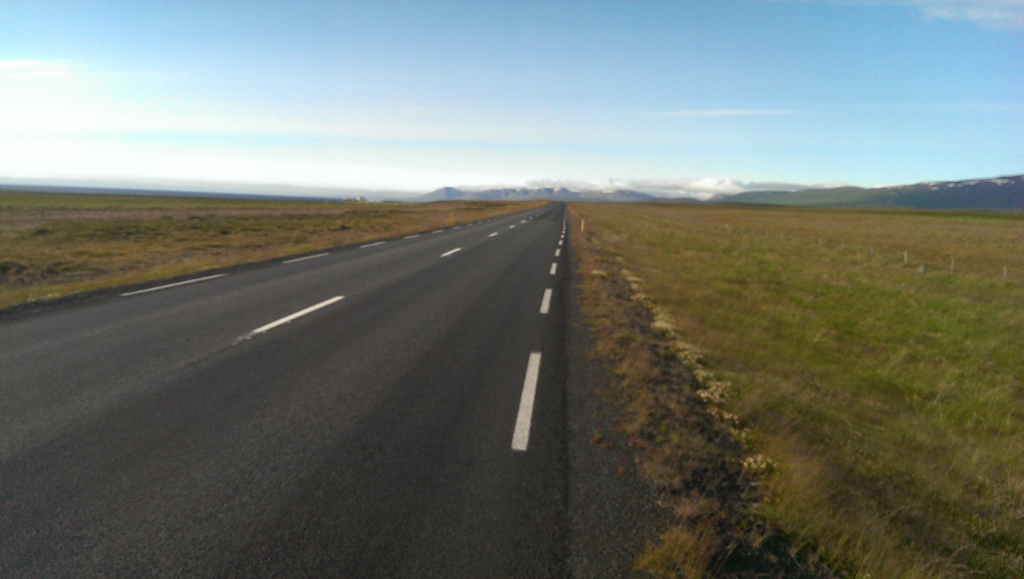 The sun was low and covered the grasslands with a beautiful golden cloak of light. The mountains in the distance where I was going according to my map. 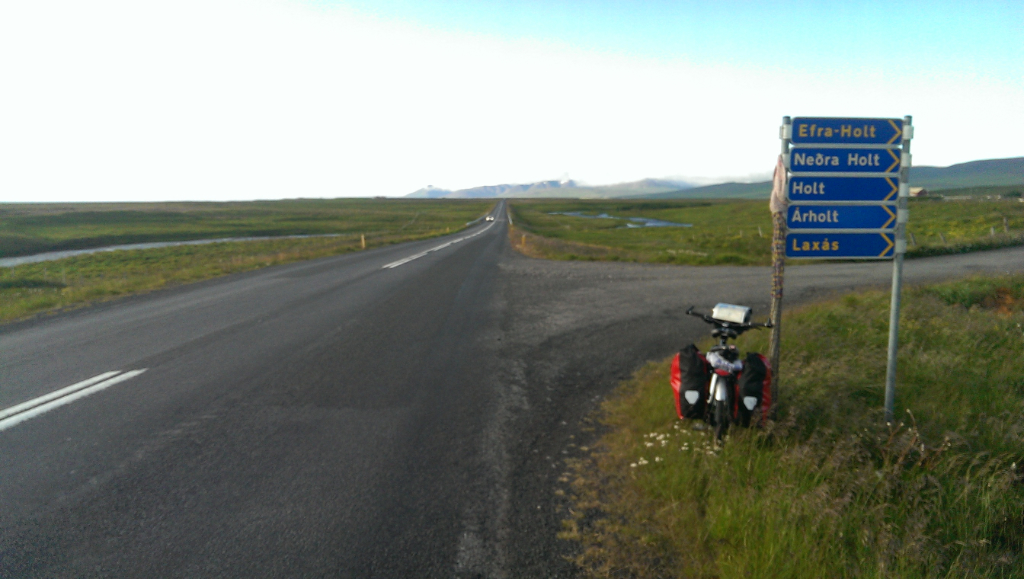 Last stop before getting to Blonduos 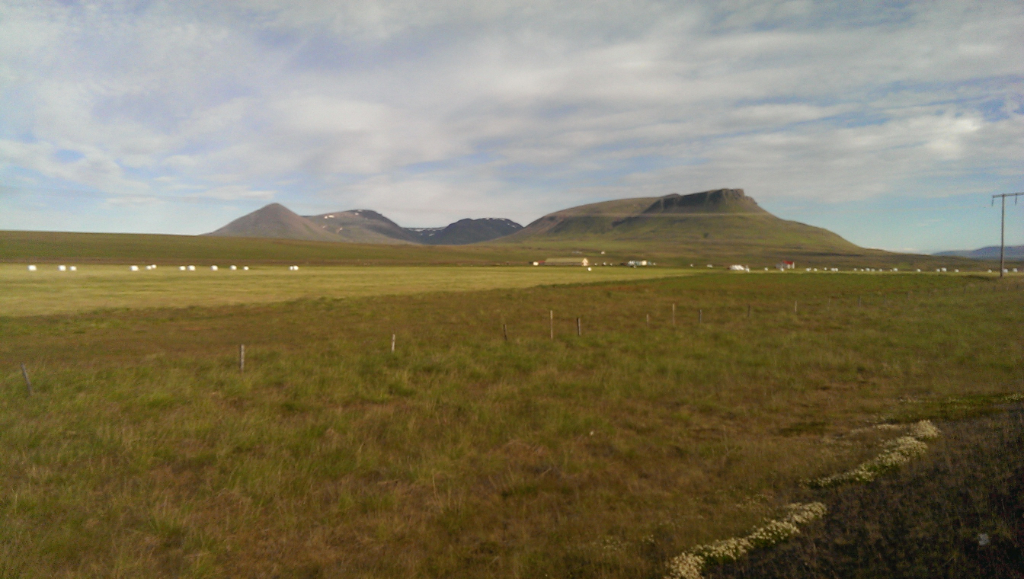 My mind switched between the effort, the question of why was I here and soaking the beauty of the landscape around. Barren and exposed, with soft shapes chiselled by nature’s forces, it felt like a miniature world where you cannot help but feel like the last person that is alive only to notice the tiny houses hidden between hills that remind you that people actually call this land home.

Located in a valley and a hill I was on the other side, so when I approached the town I had to go down on a steep hill. Grateful for the break from having to pedal I enjoyed it soon to find myself at the bottom with a roundabout ahead. Turning left and stopping. I looked at the map, but on it the town was just a small mark. The phone it is – Google maps led the way. Soon at the campsite I paid the fee, set my tent where I thought would be less wind and sat to cook dinner and reflect on the day.

Ginger tea with lemon and honey 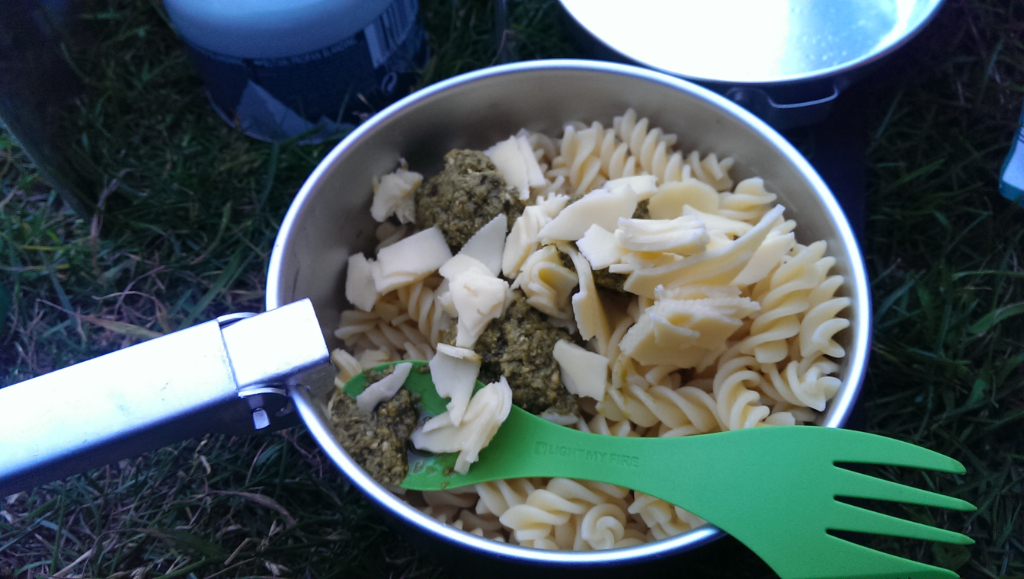 Pasta with cheese and pesto

Probably one of the tastiest dinners I’ve had in my life (after the ones Andra makes obviously) I enjoyed every bit of it, happy by its simplicity and thankful for the richness provided by the pesto.

It was a tough day, a really tough one, not so much physically as mentally. Could I really go on much more, it was just day five and the weather was calm. I knew there are some worse days ahead, but I didn’t now how I could deal with them. 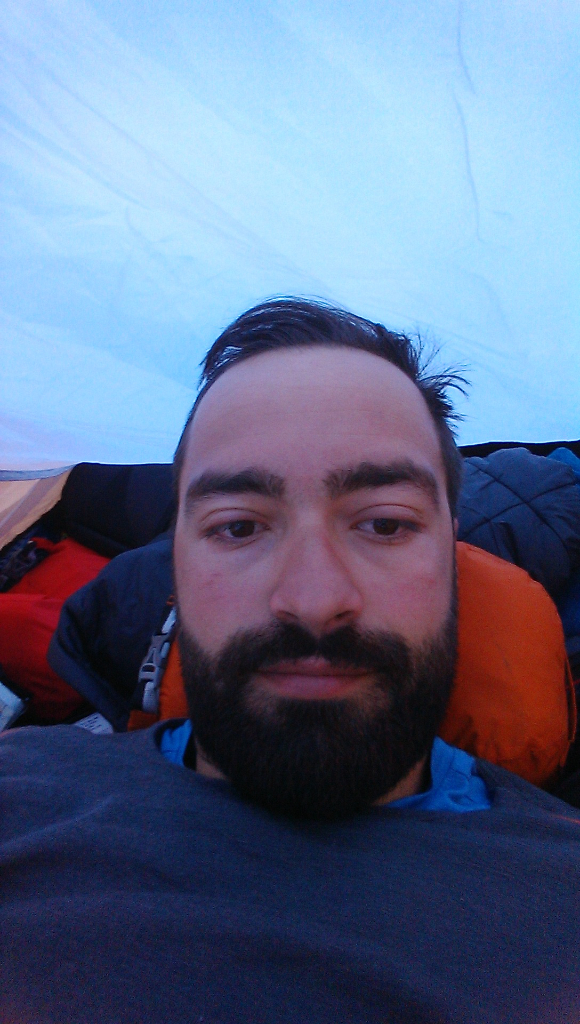 My face was swollen from the wind and a bit burned by the sun.

I showered and went to bed looking forward to a long night of quality sleep and rest.