I knew it will be a long day ahead, some cream was applied to the sore knee, vitamins, earplugs (a must at campsites) and I relaxed into a good night’s sleep. 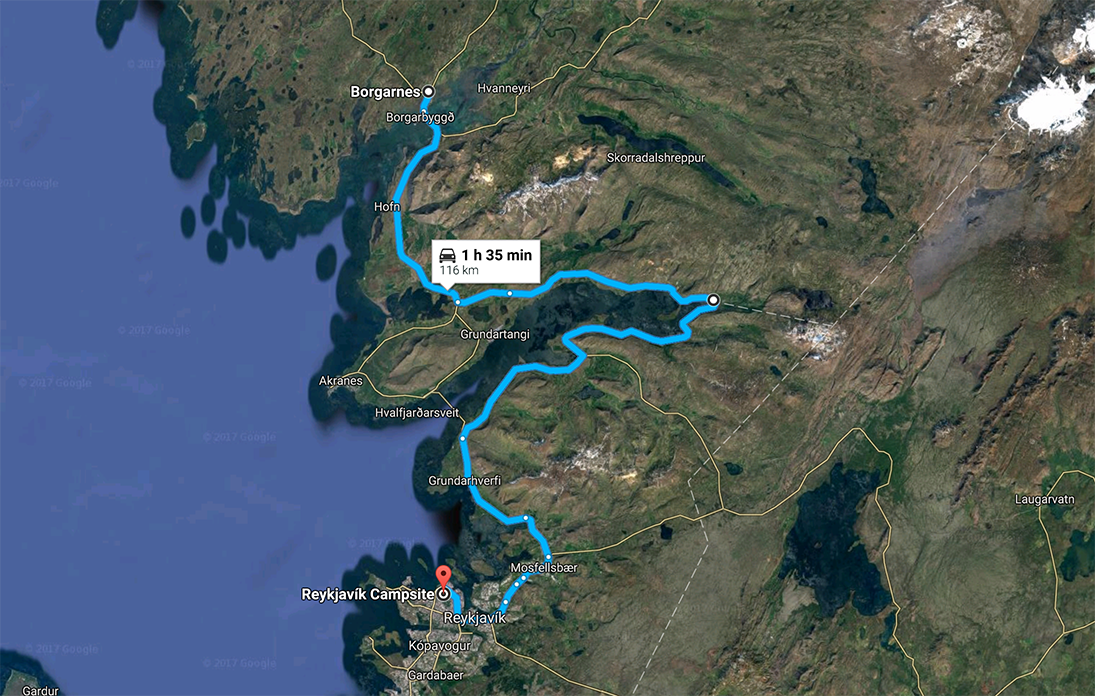 The sun was still shining bright in the morning, so much that the tent felt like a green house and the heat woke me up. But it was good, I had to get moving and since the bike setup and all the stuff, and their arrangement was still alien to me it took a lot of time to pack it and be ready. For the first week I would always forget to leave something out of the pannier or put it in the wrong place and would then have to dig for it later.

Once the tent was packed along with the rest of the luggage all on the bike I took a nice breakfast with oats, honey and a cup of coffee. It was also a time to write postcards. As soon as I finished with the last postcard it was time to go.

Even though the capital is not the biggest of cities it is still a tricky one to get out of by bike. You have the option to follow the main road (which I would do anything to avoid) or try to go between the houses and blocks but with a good chance of getting lost. Luckily I had Google Maps which led me out of the city following the small streets.

The directions were for pedestrians and that put me through some interesting dirt tracks with horses grazing around. 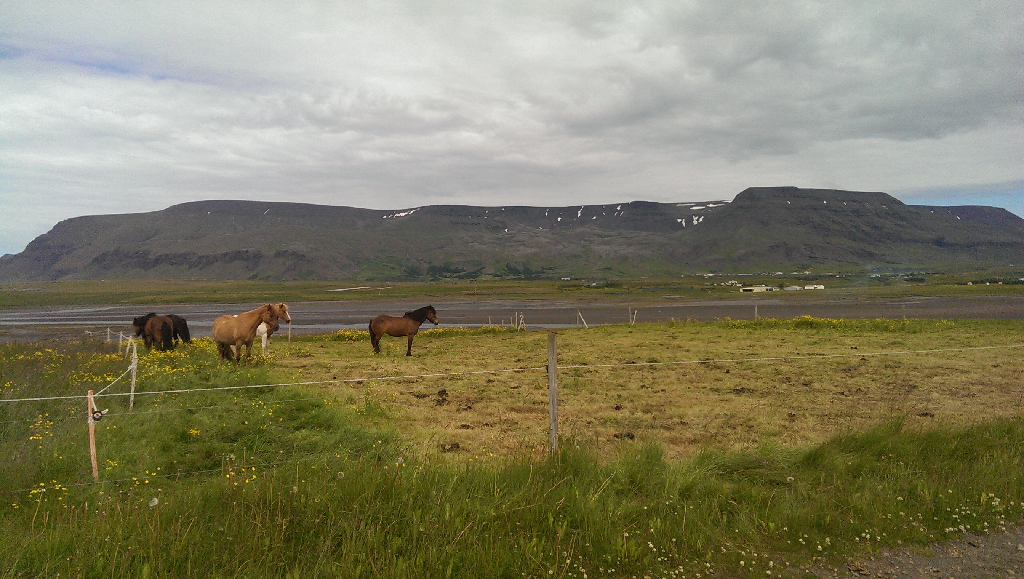 After about half an hour on dirt roads I was finally close to the end of the city which felt like a day worth of cycling on its own. Once on the main road the kilometers were moving much faster and soon I was looking back at the capital in the far distance. 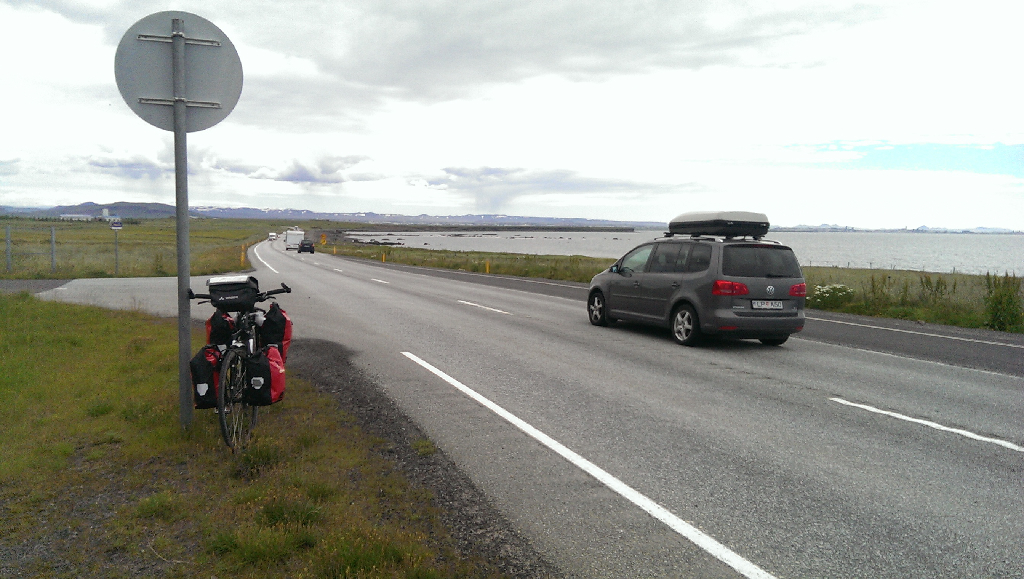 Reykjavik is actually just about 60km away from Borgarnes by car, but the road goes through an underwater tunnel that is forbidden for cyclists. This brought me on the round trip through road 47 which, an additional 55km. But was I glad to go through there – looking back it had some of the most beautiful views intensified by the warm and sunny weather. Iceland was proving not as unforgiving as I expected. 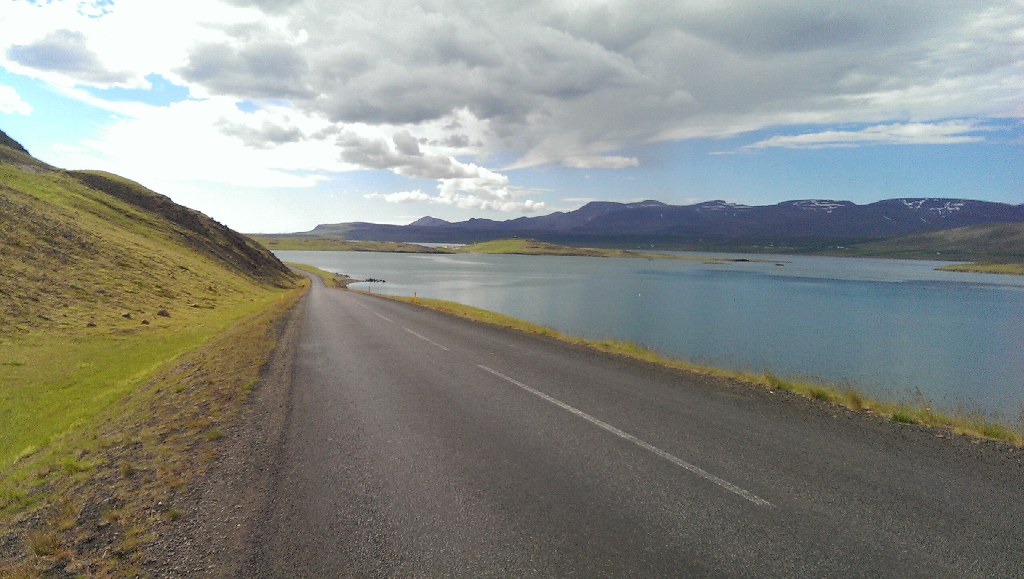 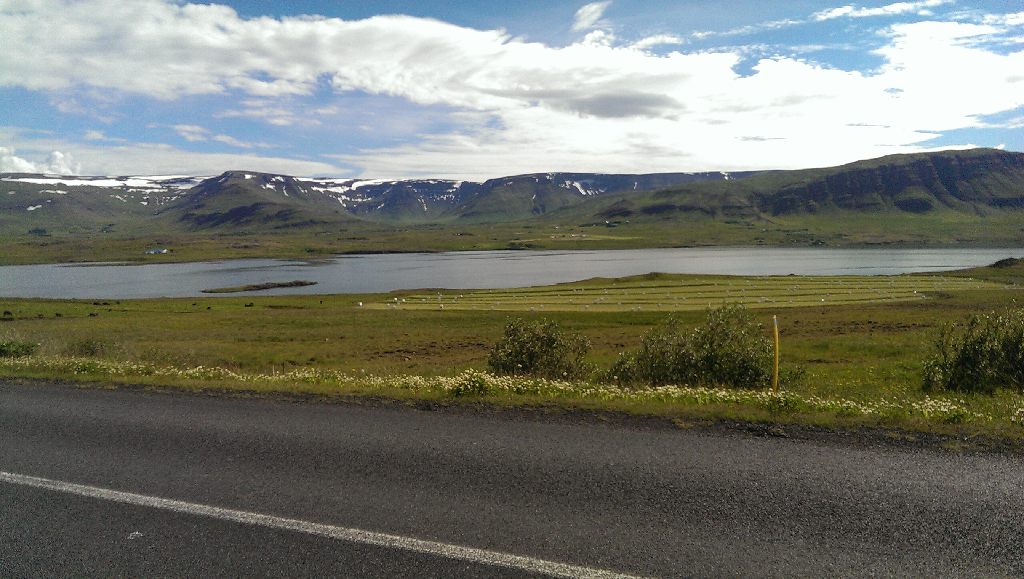 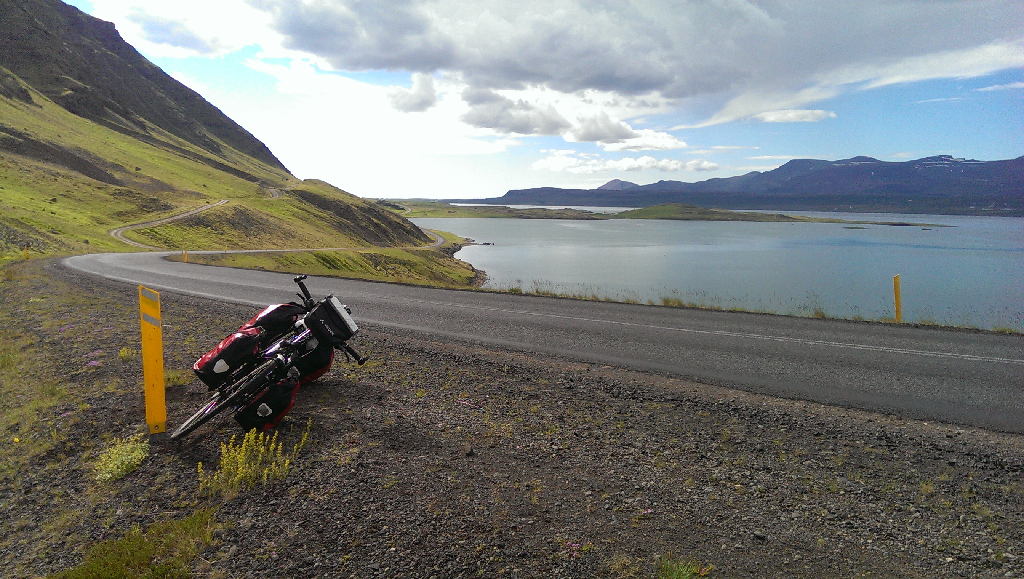 Running short on water I saw a farm and turned off the road, entering through the large gate. Two elderly Icelanders were discussing something. I approached slowly and showed them the water bottles and asked for water. The younger (seemingly) one told something to the older, he took my bottles and went into the house. The first one smiled at me and told me that I could drink the water from any creek I see next to the road (I already knew that intellectually but never actually thought about doing it). After he got into a JCB and commenced digging a channel 3-4 meters away from me. 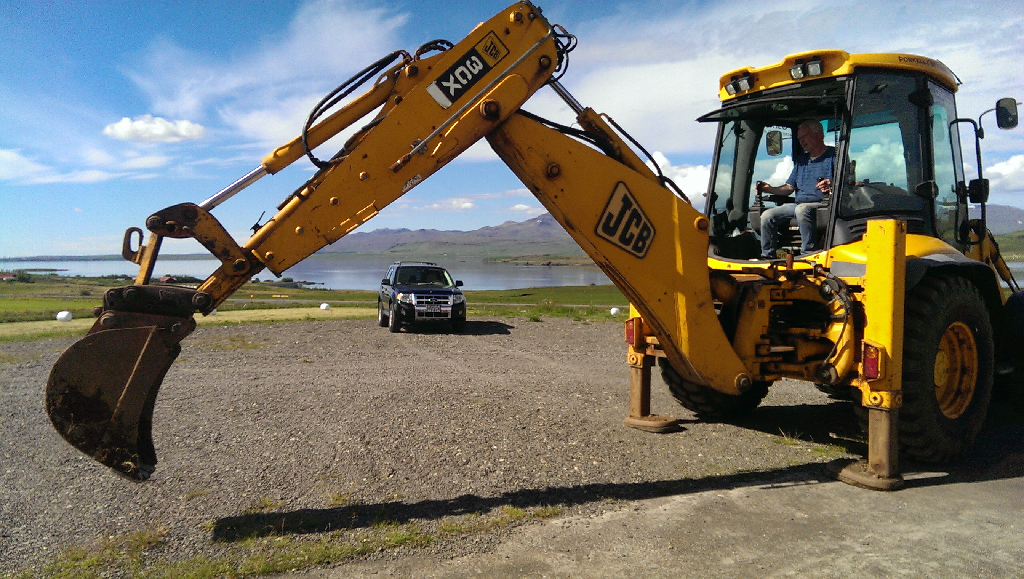 The second one came back with the bottles full with water, I wished them a great day and moved back to the lovely road which brought more beautiful views. 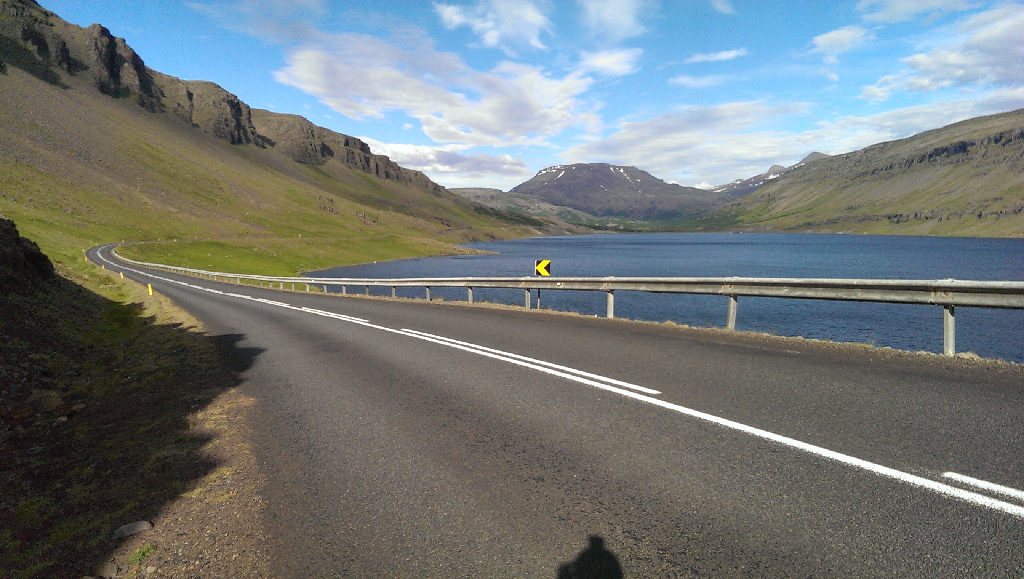 It was a perfect day for cycling and since all the cars were going through that underwater tunnel I was alone on the road. 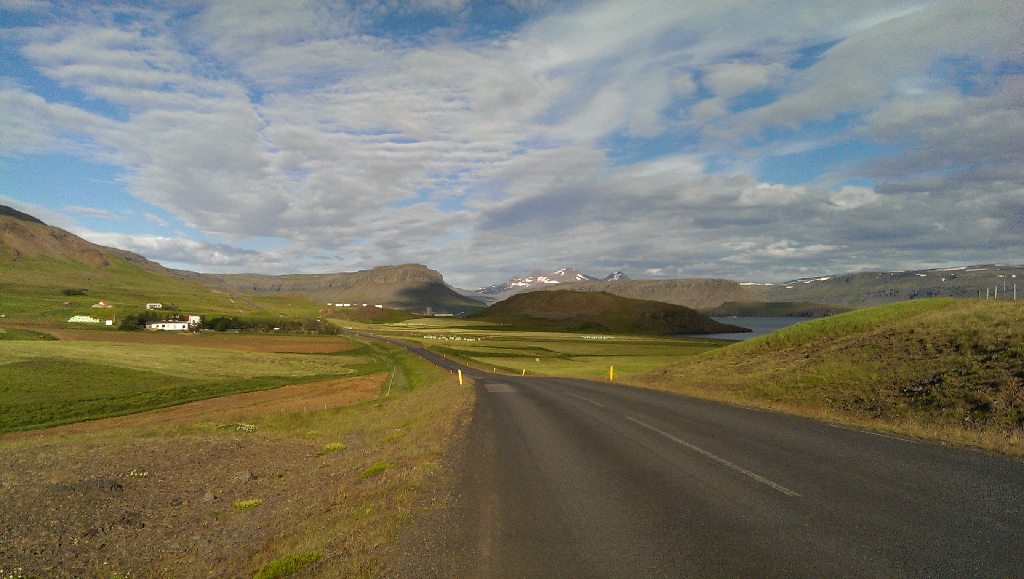 About 80km in there was a small supermarket on the side of the road where I stopped and ordered a simple sandwich to bring my energy back up. 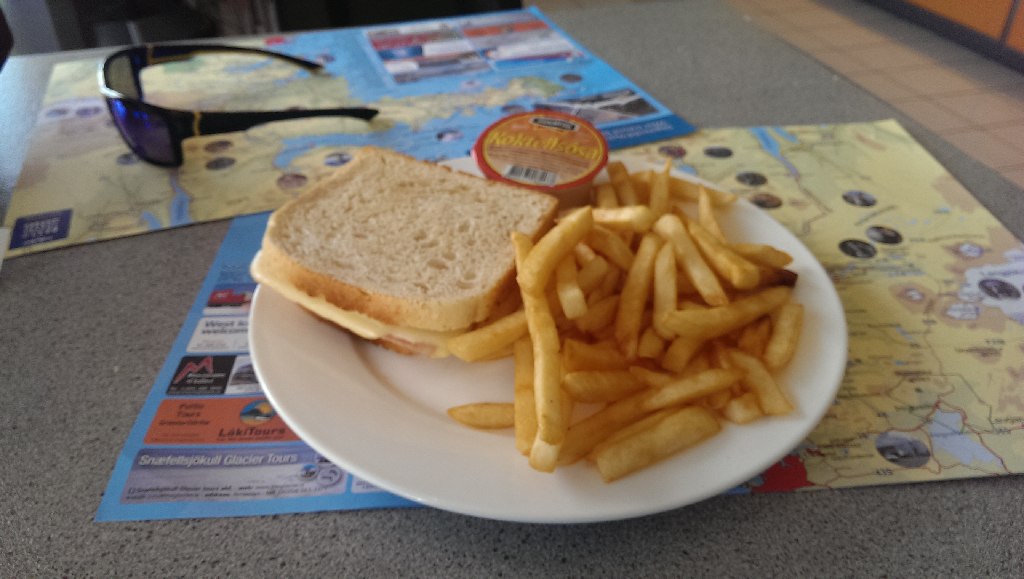 I cannot say that Icelandic food impressed me

Back on road 1 and the wind

After the break for food I felt really well and pushed on. Road 1 was coming soon and I was eager to make more distance. The kilometers were passing with ease again and the landscape changed quickly. I was coming out of the bay hugged between mountains into the flat wetlands.

Soon on road 1 and what a difference. Cars were overtaking me a few per minute. The sense of leisure and enjoyment was replaced by full concentration and I only wanted to cover the next 30km and rest for the day. But Iceland had a treat hidden, it was the first day when I was properly going to get introduced to the king of Iceland – the wind.

With no protection by the mountains I was directly exposed to a headwind which was pushing me back as with a hand in my face. An average of 10km/h and a very difficult progress followed. I was counting every meter and at points felt like pushing the bike on the flat. It was also getting late and after just day 2 of already 100km I was feeling tired.

However, the views around me did not give my eyes a break and it made me feel privileged to be a spectator of the evening light with majestic mountains and dramatic landscape around. These were the moments for which I had come. 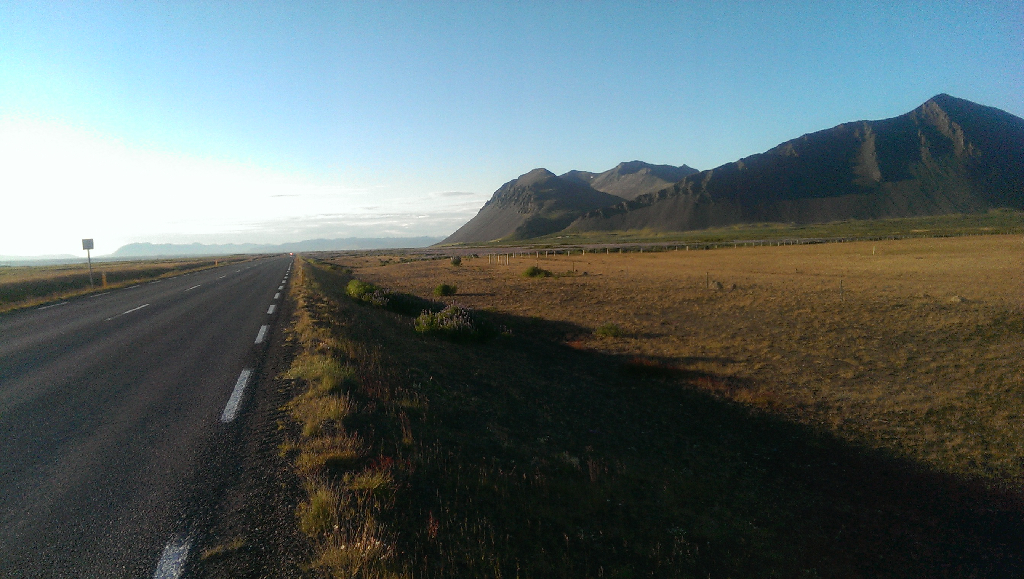 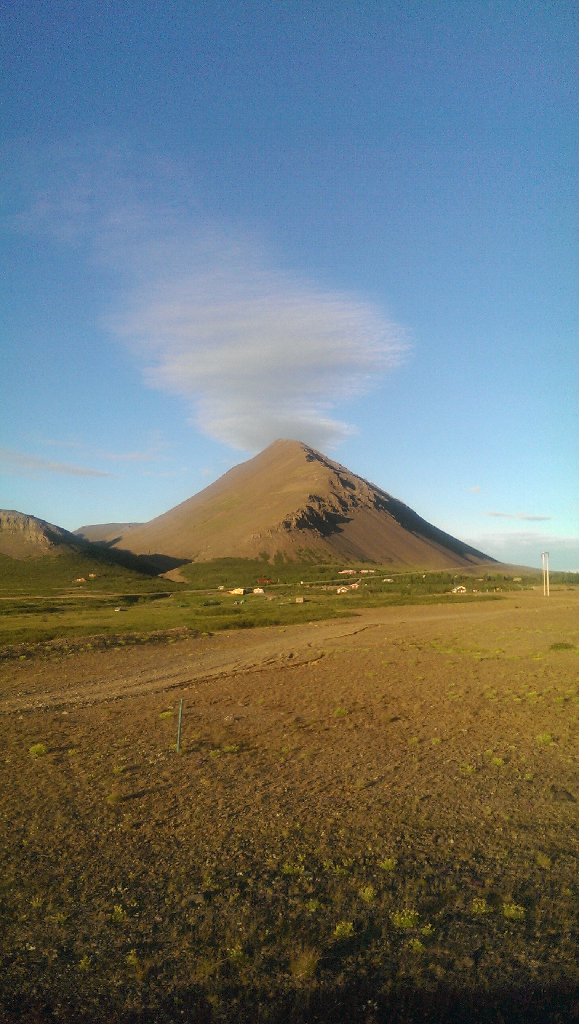 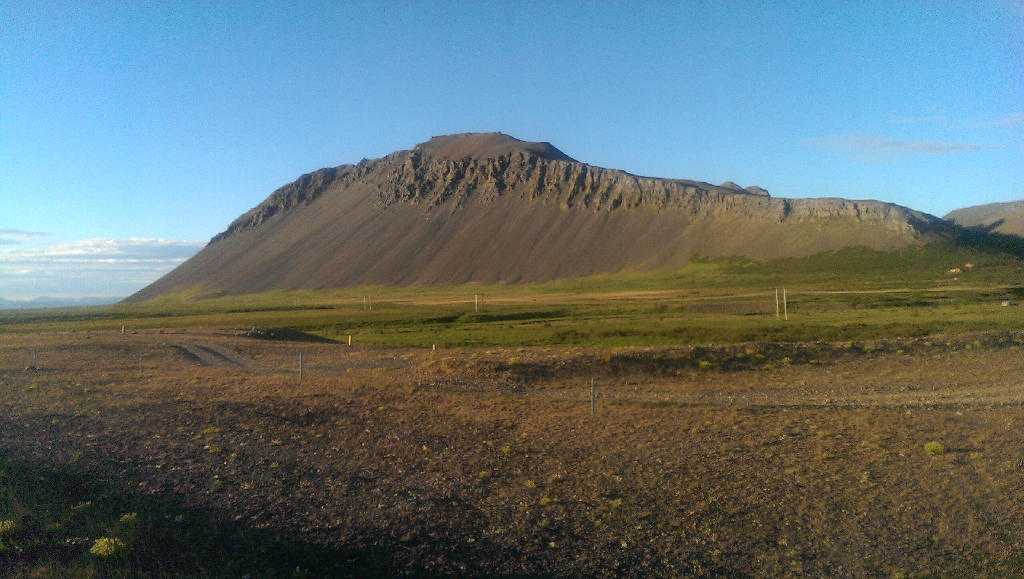 The road moved slowly and after a turn I could see Borgarnes in the distance. Seeing the town boost my moral and gave me energy.

Just before Borgarnes the road goes over a long bridge to enter into the town. Only a few kilometers and I could see my sleeping bag waiting for me. My legs were tired and I wasn’t pushing hard anymore. There was still wind but I didn’t care anymore. The music playing in my headphones and I was just enjoying the feeling of a good day while the cars were overtaking me.

Something hit the back of my helmet. I turned my head and there was a bird less then a meter from my head which had just pecked my helmet. I was startled, took my headphones off and quickly stopped the bike on the side of the road. Before I could realise it there were 5 or 6 birds flying in a circle a few meters above my head. They made noises and started diving down to attack me one after the other.

“WTF” I couldn’t believe what was happening. I tried waving my hands in the air to scare them off but they didn’t care. One after the other they kept diving trying to hit me. I didn’t wait to see if they would get lucky, jumped on the bike and started riding as fast as I could with the rest of my energy. They followed me for about 200m and then flew back.

“Wth just happened”. I was laughing, I’ve never seen such aggressive birds. I was thinking how ridiculous it must’ve looked on the side from the cars passing by a cyclist waving his hands in the air and birds above his head diving down to hit him… Later I realised it was the breeding season since we were so far up North and the road probably passed near a nest so the parents were just protecting their eggs…

After asking a few people I found the campsite at the opposite side of the town. No showers, no reception, just a space with a few parked caravans and tents. There was a toilet. Somehow I found myself in a conversation with a family of Icelanders and they offered to charge my devices in their caravan. 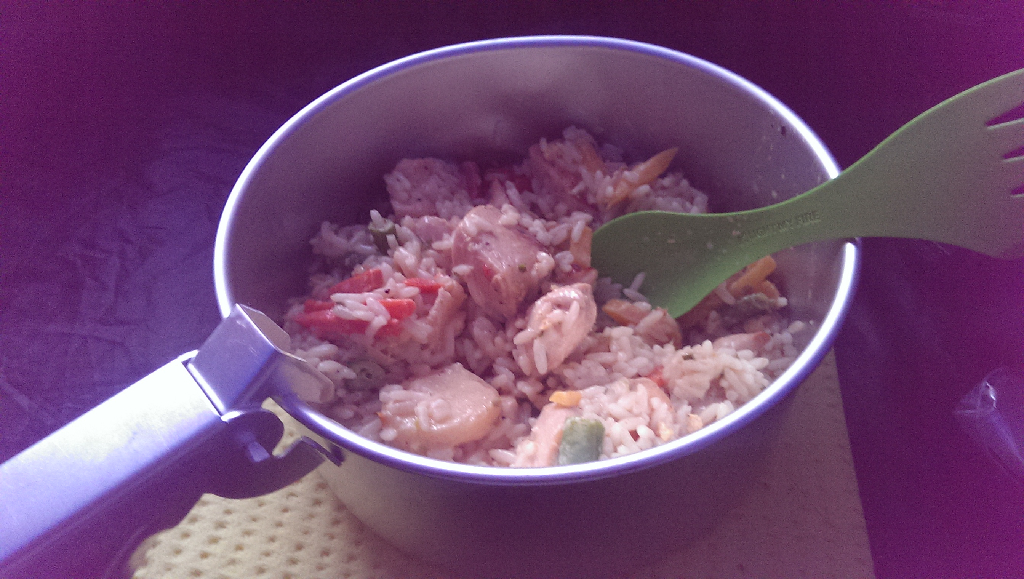 Rice with mushrooms, vegetables and spices. The Icelandic family also brought me some chicken left from their dinner so I gladly added it to the rice. A great dinner! 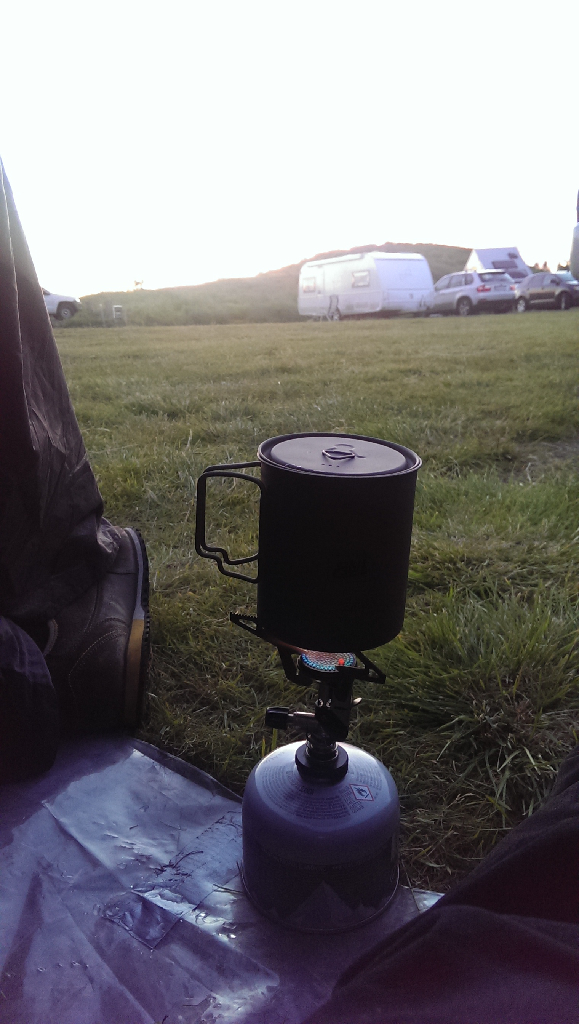 It was late and I was eager to jump in the tent and fall asleep, but before doing that I spent some time looking at the beautiful sunset. In the image above you cannot see it but the sky was burning in orange and red while highlighting the clouds. 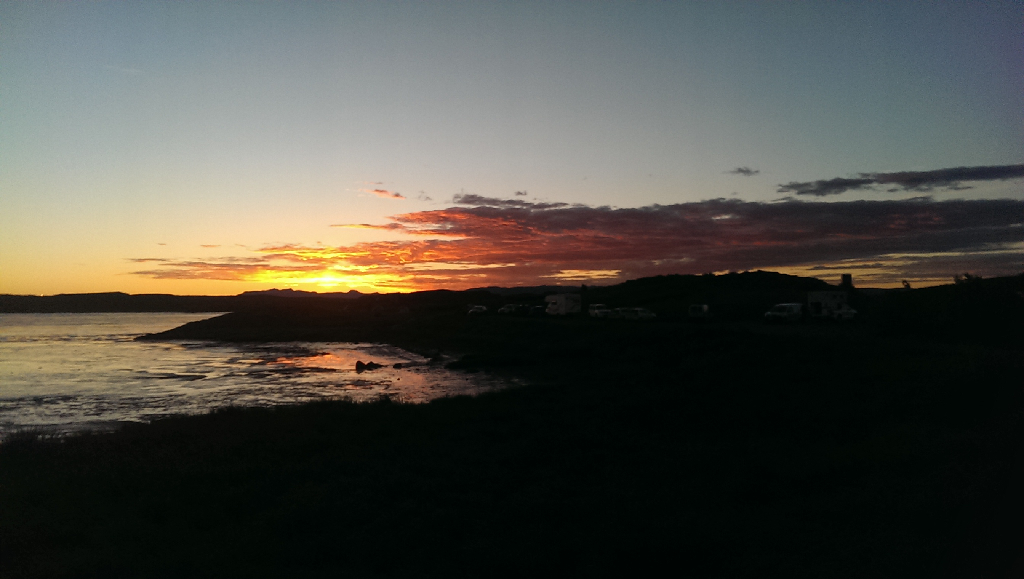 6 thoughts on “Cycling around Iceland – Part 2”